Threatening to take the law into their own hands to stop the event, Sinhale members accused foreign embassies of paying NGOs to “put this filth into the minds of our Sinhala people and make us all extinct.”

“How many fags do we have here in Colombo? NGOs are obtaining a good dowry from embassies. They are going to attempt to put this filth into the minds of our Sinhala people and make us all extinct.”

“The scum of the earth f**kers who hide behind colourful rainbow flags are preparing to have an event from June 10th to 18th, and before that they’re preparing to try and legalise faggot f**kery.”

“Faggot activities aren’t legal. Let’s take the law into our own hands. If the police aren’t going to do anything about it our community is ready to do it ourselves. We will not let these mother f**king dogs to ruin our culture. Ladies and Gents of Sinhale, join us on the 28th to look at the faces of these faggots at Race course.”

The threats were highlighting by the UK Liberal Democrat peer, Baroness Barker, who is also the Vice Chair of Parliament’s APPG on Global LGBT Rights.

“As a Liberal Democrat peer, I am asking the FCO to challenge the Sri Lankan government to protect its LGBTIQ citizens, to allow them to meet peacefully in a safe space free from discrimination and prejudice. I also challenge the government of Sri Lanka to take appropriate action against this vile and violent group,” she was quoted as saying by the LGBT news site, Pink News. 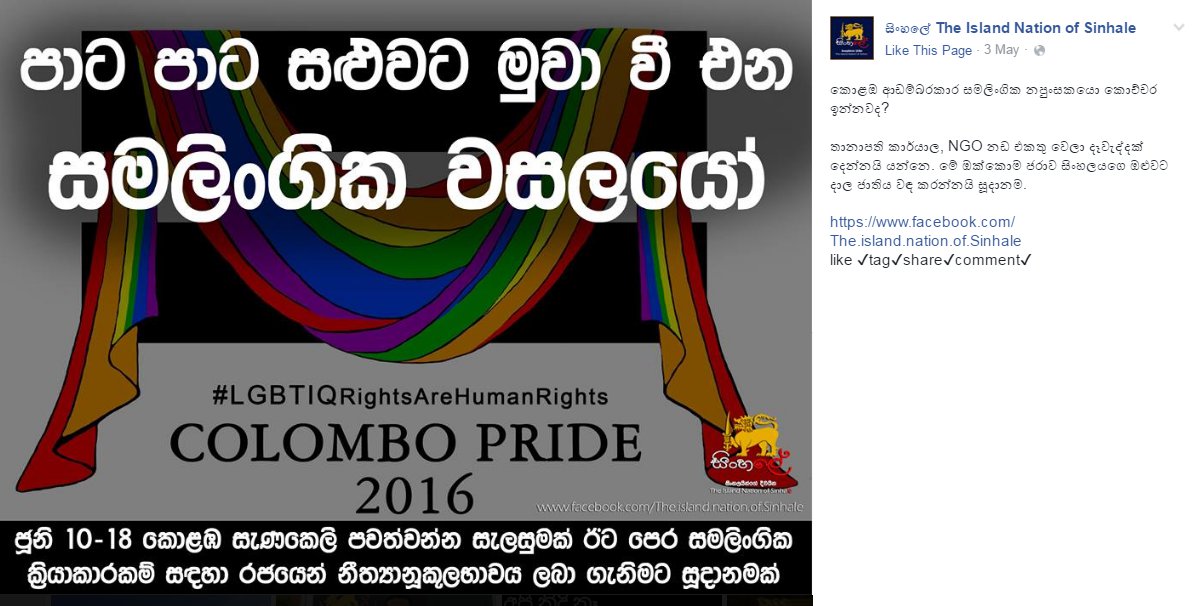