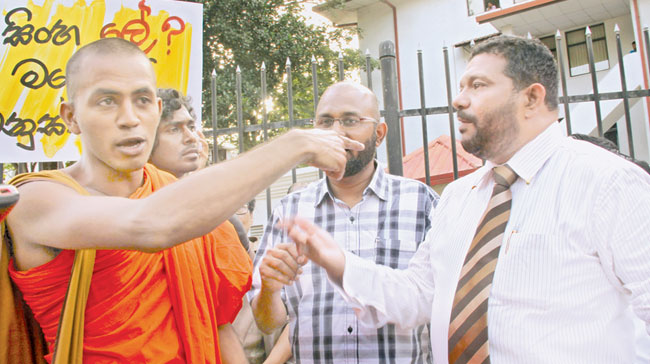 (A Thera of the ‘Singha Le’ organisation and Azad Sallyin trying to make their voices heard. Picture by Mahinda Withanachchi)

A tense situation erupted during the campaign of ‘Different yet Equal’ close to Baudhaloka Mawatha yesterday.

A group of monks representing the “Singha Le Jathika Balamuluwa” disrupted the unity campaign claiming that the campaigners cannot use the term “Singha Le” during their demonstration. The ‘Different yet Equal’ refuted it saying that “Singha Le, Ekama Le”.

“The motive of the ‘Singha Le’ organisation was to create a tense situation and to spread their racist ideology, Azad Sally said.

“We organised a silent and peaceful demonstration to show that all people should be treated equally,” he said.

However, monks representing the “Singha Le Jathika Balamuluwa” said the demonstration was organised to encourage racism.

“It is a threat to national security,” they alleged.

Differences are natural and divisions are socially constructed, said one of ‘Different yet Equal’ participants Subha Wijesiriwardene adding that they do not represent any organisation.

They are a collective of citizens from different backgrounds gathered for a common cause.

“We have voluntarily gathered here as group of friends and as citizens of Sri Lanka to stand for our right and to remind the public about our responsibility as citizens to create a peaceful society in which our different ethnic, cultural, and religious identities are valued equally,” she said.

Sally said the government should take immediate action against the perpetrators.

“We urge citizens to stand up against racism. We all have a collective responsibility. We are against racism and all kinds of discrimination.

We want a just, democratic and equal Sri Lanka. We will keep taking that message as citizens to people as much as we can,”

The demonstrators of ‘Different yet Equal’ also claimed that the Police failed to do their duty. They were biased towards “Singha Le” protestors.

“Counter protesters were holding a distorted flag. Police made no move to arrest them,” the demonstrators said.