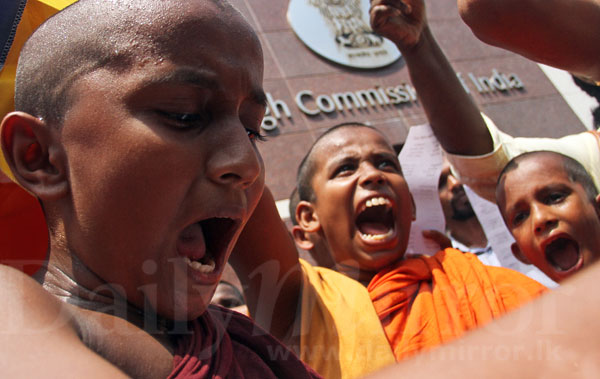 ”Out of our concern over the continued erosion of the above situation Muslim Religious, Civil, Professional, and Academic and Business representatives gathered on the 5th of March 2013 at a meeting organized by the Muslim Council of Sri Lanka in Colombo. At that meeting the group resolved to write to your Excellency regarding our concerns.”

(Following is the text of a letter sent to President Mahinda Rajapaksa by Mr. NM Ameen the President of the Muslim Council of Sri Lanka)

As you are aware the Muslim community has recently been targeted by extreme Buddhist groups for virulent attacks of hate and abuse on the basis of our religious beliefs and cultural practices and erroneous assumptions regarding the increase in our numbers. These groups who- are targeting all minority religions have created a great sense of unease among Muslims throughout the country. Their campaign has also affected all businesses—not just Muslims—and resulted in a threat to the maintenance of law and order affecting all communities.

Out of our concern over the continued erosion of the above situation Muslim Religious, Civil, Professional, and Academic and Business representatives gathered on the 5th of March 2013 at a meeting organized by the Muslim Council of Sri Lanka in Colombo. At that meeting the group resolved to write to your Excellency regarding our concerns.

While we appreciate the many recent pronouncements that your excellency has made regarding the multiethnic nature of our polity, the Muslims’ long history in the country, and the necessity of all ethnic and religious groups to live in harmony, we see no substantive reduction in either the incidents of harassment of members of our community or the campaign by the extremist groups.

These groups have been using the traditional media, social media, public meetings, posters, leaflets, and the circulation of rumours and misinformation insulting Muslims to inculcate a sense of fear and hatred of Muslims among Sinhalese. They are using abusive language when referring to our religious practices and publicly calling for a boycott of businesses run by Muslims.

As you know the Muslims have a long history in Sri Lanka and have enjoyed good relations with our fellow citizens of other ethnicities. While we were harassed during colonial times, and we experienced great strife during the riots of 1915, since then there have been no significant or widespread altercations between Muslims and Sinhalese. The few local eruptions like those in Puttalam in 1976 and Mawanella in 2000 were fortunately controlled before they escalated. There were also similar hate campaigns against Muslims at different points in the past.

These too, fortunately, were never allowed to escalate due to the good relations between the majority of Muslims and Sinhalese and the good sense of the Sinhala leadership of those times. We also lived well with our Tamil brethren in the North and East –with whom we share a common language– for centuries. Unfortunately the extremist ideology of the LTTE which wanted to bring about a mono-ethnic state for the Tamils of this country saw a deterioration in these traditional good relations and the Muslim community was driven out of the North in 1990. Muslims who were expelled in 1990 are still struggling to return.

Influenced by the global resurgence of Islamic piety in the 1980s, Muslims in Sri Lanka too endeavored to become more pious and committed Muslims. This process saw the introduction of the hijab and the abhaya for women and the practice of the long beard and in some cases the thobe for men. Sections of the community have also chosen the nikab or face covering for women. The religious revival among our people saw the reduction of alcoholism among rural communities, the introduction of discipline within the entire community, an increase in religious knowledge among our young and a greater engagement with Islamic history and heritage. We consider this religious revival among our community to be an important historical development from which many benefited greatly.

Today we are targeted by some Buddhist extremist groups for the wearing of the hijab and abhaya, the beard and thobe and more specifically, the nikab. Sections of our community hold these practices to be very important, and we strongly reject the criticisms that have been directed against them and charges of “extremism” leveled against them. The Muslim community, like all other communities in the country, consists of diverse groups many of whom do not prescribe to some of the above dress practices, and may not even agree with them. However, we consider it to be the right of all Muslims to choose to practice their religion as they see fit. In the spirit of tolerance and respect for difference within a multi-ethnic country, elements who may be “disturbed” by such practices should educate themselves about these practices. There is no necessity to cast these practices that are harming none and are breaking no laws as “extremist” without proper basis. It is incumbent upon all communities to respect one another’s religious customs regardless of how new or how ancient they may be.

Rumors are also circulating about Muslim armed groups operating in the East. These are reminiscent of some that were circulated by the LTTE a decade ago and proved to be canards. If there are such groups they should be apprehended and dealt with immediately through due process of the law. If this is not the case, then urgent steps should be taken to prevent the rumor-mongering.

We Muslims consider ourselves to be citizens of this country with an equal entitlement to enjoy the many geographical beauties, the constitutionally guaranteed rights and freedoms and the promise of post war economic development; and while doing so we expect to fully enjoy the right to practice our religion and culture in a manner that is in no way harmful to other religious communities. More than anything else we also demand our right to live without being targeted by groups whose reach at the grass roots levels and whose exposure through media is causing a wave of hate towards us among the Sinhalese.

As you know, Muslims are well represented in all the professions, in the business sector, in universities and in civil society. We have made and continue to make a significant contribution to the country and would like to be recognized as such. As responsible citizens belonging to a significant minority group we have shown great restrain in our response to the extremists. We have done so due to our faith in the larger Sinhala community who, we continue to have good relations with, and in whose ultimate good sense we believe. We have done so believing also in your own commitment to a peaceful and prosperous future for our country. As you know, many are anticipating another conflagration similar to that of the pogrom against the Tamils in 1983. It is against the best interest of every single Sri Lankan to embroil ourselves in another conflict that will surely destroy us.

We urge you therefore, your Excellency, to consider the following in order to stem the rising tide of anti Muslim extremism in the country:

*Take decisive action by publicly condemning the hate campaign of the Buddhist extremists.

*Continue to proclaim publicly that the minorities are equal citizens and equitable stakeholders in the country.

*Instruct the police to take necessary action to stop incidents of harassment against minorities and their businesses.

*Empower the police to respond to instances where such forces try to take the law in to their own hands.

*Ensure that the authorities take action against the media when they contribute to the propagation of this hate sentiment.

*Diffuse the tension around the halal issue by either empowering the All Ceylon Jamiyyathul Ulama (ACJU) to continue to offer the certification, or by mandating a government institution to engage in the process(given that the certification is most necessary to maintain our export markets).

As stated above, we trust in your Excellency’s good judgment in this matter. As loyal citizens of this country we wish to continue to live in peace and enjoy the greatness of this land. We are confident that your Excellency will take the necessary steps to ensure that this happens.