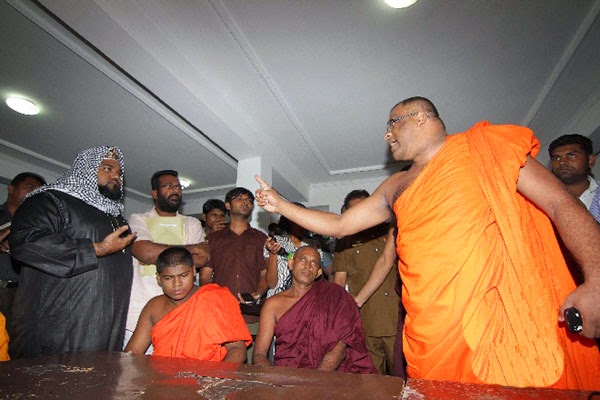 The private ‘Swarnavahini’ television showed Gnanasara thero and a group of people preventing the press conference from taking place and verbally abusing a Buddhist monk who was about to brief the media.

It was reported that the press briefing was organised to brief the media over allegations that a new resettlement colony was being constructed with funds from a Donor Agency and named as Jassim City inside the Wilpattu National Park.

Gnanasara thero was seen in the late evening news bulletin on  ’Swarnavahini’ verbally abusing the monk at the press conference venue and when the Muslim Cleric attempted to intervene he was also verbally abused.

Gnanasara thero and his supporters were shown threatening some people who were reportedly building homes in the area while men in police uniform looked on.

Muslim organizations in Sri Lanka had just yesterday raised concerns over the BBS and comments they continue to make on Muslim related issues.

In a letter to President Mahinda Rajapaksa, a copy which was made available to the media yesterday, the Muslim Council of Sri Lanka, the Sri Lanka Jamath-e-Islamia, the All Ceylon Jammiyyathul Ulama and 12 other Muslim organizations noted that the BBS was continuing to incite hatred against Muslims. (Colombo Gazette)