Extrajudicial killings point to a decline towards dictatorship: Sajith 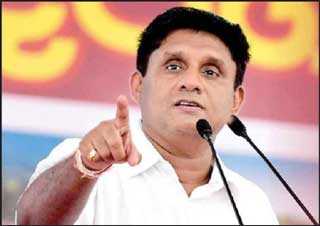 Opposition Leader Sajith Premadasa yesterday called on the Government to put an end to extrajudicial killings and to launch an independent investigation into them.

His comments follow two custodial deaths of suspects by Police within two days.

The Samagi Jan Balawegaya (SJB) leader charged that the rise in custodial death was an indication that the Government was moving towards a dictatorship, stressing that while criminals need to be brought justice, everyone should be afforded due process and punished by Courts.

“We all want our community to be free of criminals. However, we need to uphold the law. We need to ensure each person goes through the due judicial process when they are accused. We can see a wave of killings happening. These killings violate the rights of the public.

“We don’t need a Government that slides towards dictatorship. At a time when the world is questioning our commitment to upholding human rights, we as a country should be strengthening our human rights process and protecting the public,” MP Premadasa opined.

The Opposition Leader stated that there was no dispute that criminals need to be punished, stressing that punishment should be meted out with the confines of the law. He questioned if the custodial deaths were a move to protect persons involved in organised crime who may have political protection.

“Could these extrajudicial killings be to cover up links between politicians and senior crime figures?” he questioned, pointing out that custodial deaths erode public confidence in law enforcement agencies and the Judiciary.

“Do you not respect the Judiciary of the country? Is that why you ignore the law and create a wave of killings?” he questioned from the Police, stressing that the Government should take responsibility for the killings.

Premadasa called on the public to unite against extrajudicial killings and the undermining of the law by State officials, adding that the SJB will act against such violence.