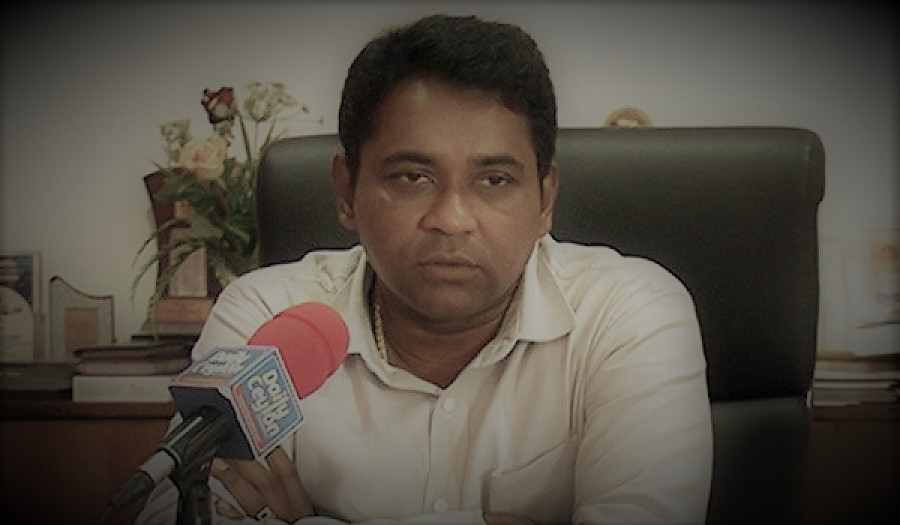 Under pressure from the media to explain his attempts to establish government sponsored media regulation in Sri Lanka, Director General of Government Information Dr. Ranga Kalansooriya has spoken half truths and lies to cover up his plan.

This is what he says in the government news portal News.lk: ”Only the discussion paper prepared by the Sub-Committee appointed in this regard is available. Eight media organizations had participated in the basic discussions in July last year and set up the above Sub-Committee. The five-member Sub Committee includes Ms. Seetha Ranjani, Upali Arambewela, Dharmasiri Lankapedi, N.M. Ameen and is headed by Wijayananda Jayaweera. All the activities related to this process are being conducted by this subcommittee.”

On the contrary in an email Mr. Wijayananda Jayaweera says that the Bill to establish the Independence Media Regulatory Body was drafted by him with inputs from Toby Mendel. In a twitter message Mr. Toby Mendel also accepts that he took part in drafting of the Bill.

This clearly contradicts Information DG’s statement that the Bill was created by a group that includes representatives from media organisations.

Both these gentlemen have done the drafting free of charge.

Mr. Mendel’s recent trip to to Sri Lanka in order to promote the draft, including all other expenses was paid for by the International Media Support (IMS), Denmark.

The entire process of this state sponsored media regulation in Sri Lanka has been initiated and financed by the IMS, Kalansooriya’s former employer.

Kalansooriya has so far not rejected the allegation leveled at him by the Lanka-e-News that he is still employed by the IMS, although he has taken up a full time job as a political appointee.

Although then FMM convener Seetha Ranjanee participated in two such meeting, FMM has not provided any inputs to this media regulation draft.

In a meeting held to explain the draft, then FMM convener Seetha Ranjanee told a small gathering in April this year that she only participated in two such meetings.

Kalansooriya’s answers given at a government press conference on 05th Aug 2017 re Media Regulation Act, does not provide any clues that help us find out who appointed this sub-committee? Was it Mr. Kanasooriya in his capacity of DG government information? Does he have authority to appoint such a committee? To whom is this committee responsible? Or is this a self -appointed voluntary committee which is responsible only to themselves?

Kalansooriya never mentioned Mr. Mendal’s involvement in drafting the Bill at the press conference. Why?

Kalansooriya further says that “as his department was not capable of bearing a huge cost, financial support was obtained from an International Organization to conduct Consultation programs in all 25 districts.”

He has also refrained from clarifying who provided the financial support and for whom. Why he did not mention the IMS by name?

Sri Lanka Brief has received the information that the provincial meetings are also paid for by IMS.

NSMR (National Secretariat for Media Reform in Sri Lanka) which organises provincial consultations to promote media regulation in Sri Lanka says that they do not have funds to organise so-called consultative meetings. But so far all provincial meetings have been organised by the very same NGO NSMR. How did they managed this miracle?

So who is behind this web of secrecy? And Why? Is this a plan by the UNP led by PM Wickremasinghe who appointed Kalansooriya to this post? Wickremesinghe’s desire to control media to his whims and fancies is well known.

Some time back a publication called “Rebuilding Public Trust – An assessment of the media industry and profession in Sri Lanka” was published and handed over to PM Wickremesinghe. Producing such a report was a huge task. It was published by IMS and NSMR. Though it was published by NSMR ,an organization that is no longer functional has handled the finances!

As IMS web site states “the assessment, which was co-published by International Media Support, was led by the Secretariat for Media Reforms established as a virtual group consisting of five partners with meeting facilities provided by Sri Lanka Press Institute (SLPI). ”

Another intriguing fact is that on the front page of this publication NSMR has been mentioned as  SMR sans the word “National”. Its website logo is different. Who is hiding what?

When asked how much money was spent for this report and who was paid NSMR states that they didnt handle the finances of producing the ‘Rebuilding Public Trust’. In fact, the financial part of the report was handle by another entity called “Strategic Alliance for Research and Development – SARD” which seems to be now defunct. Its web site is not available and last post on its Facebook page was posted in November 2015.

Then who gets the IMS funding to organise these provincial meetings? And is this a process initiated by the Government of Sri Lanka?

The most important issue whether the government will accept any report compiled by the non governmental NSMR as a result of these meetings as legitimate consultation report on media regulation in Sri Lanka?