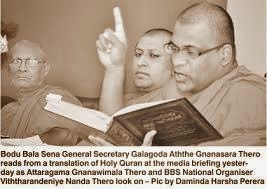 INSD, an international network of Sri Lankans living in Europe condemns the provocative and anti democratic activities by Bodu Bala Sena (BBS) that  violates  rights of the minority religious groups in general and  specially  rights  of Muslim community in Sri Lanka. Disturbing a media briefing conveyed by a inter religious group, the leader of the BBS, saffron clad Gnanasara not only behave in a unethical, uncivilized manner which only suited to a violent  mob leader, but also brought disrepute and insult the Buddhism as well.  The words he used and the way he behaved  suits an underworld mafia leader and not for a  Buddhist monk.
In recent times there has being many occasions of majoritarian  Buddhist power used against the minority religion communities  as apolitical tool by extremist groups. We take this opportunity to appreciate the democratic and peaceful manner of the  minority religious groups in confronting  such attacks, and would like to humbly request such groups to maintain the same manner of response in the future as well. It is clear that if these minority groups don’t have such patients, Sri Lanka by now would be experiencing religious conflicts.

In the past few years BBS and other similar Buddhist extremist groups have acted violently against the religious minorities, disturbing the social coexistence on hundreds of times.   But  there has not being a single instance rule of law was applied to controls  such groups. In the very recent incident , when saffron clad Gnanasara was publically advocating violence in the presence of the Police, all they did was to approve him by maintaining silence.

Yet, government does not hesitate to detain and come out with restrictions against the human rights activists without proper procedures.   The message is very clear; these extreme religious groups have the patronage of the government and no legal actions will be taken against them.
The deafening silence maintain by the Mahanayakes of the Tri Nikaya in the faceoff the violence  of saffron clad Gnanasara and likes is an indication of the internal erosions of the Buddhist establishments. It is also an indication of their disrespect of rights of the religious minorities.
It is a direct responsibility of the government to avoid religious conflicts from stemming out. Everyone in the Sri Lankan society will have to face the results of religious conflicts, if we couldn’t bring to an end to the extremist religious violence and  hate campaigns.
The extremism of the majority religion group was first used against the minority Tamils, and then Muslims and Christians. These groups also tried to forcibly enter into an event to celebrate the International Human Rights Day in Colombo. Disturbances and threats  by these groups against the democratic activities of the civil society groups throughout the island is continued without any legal actions by the authorities.
There need to be a collective action to expose and condemn extremist groups like BBS.  INSD as an international network of Sri Lankan in Europe take this opportunity to pledge its support and continuous contribution towards such ea campaign .