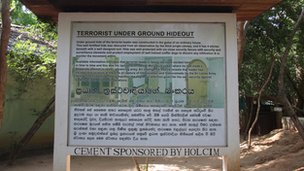 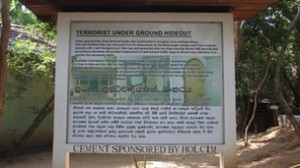 North-eastern Sri Lanka has been off-limits to journalists and most other outsiders since the civil war ended in 2009, but the authorities have now granted BBC correspondent Charles Haviland access to much of the area.
I was with the army as they detonated left-over munitions near a major battle scene.

“Here, crouch behind these sandbags,” they told me as we stood, in protective clothing, a few hundred metres from the detonation site. “If shrapnel comes anywhere near, just duck.”
I decided to retreat a lot further back. The thud was impressive.

We were in the devastated land which saw the last bitter fighting of the war. Many tall palmyrah trees had lost their tops.

Half-submerged in the arid ground I saw a single flip-flop and a plastic shoe. Who had worn them?
This is where tens of thousands of people cowered – trapped between the Tamil Tigers who conscripted their children and shot those trying to escape – and the army bombardments.

Large tracts are still mined. There are buildings sliced in half; buses with an end missing. Most poignant are the mundane things: someone’s trousers, a plastic chair, cushions, a rusting bedstead.

I looked towards a damaged Catholic church (there are both Catholics and Hindus among the local Tamil population). The church had been cleared of mines and a Sinhalese soldier took me inside. “I’m a Roman Catholic,” he told me – a minority in the mainly Buddhist military.

Sections of the roof had been ripped out, leaving a zigzag pattern of light. The soldier stood by the broken glass of a small shrine to Mary and told me he felt consoled that 13 of the 14 Stations of the Cross were undamaged.
Earlier I met a man born and bred in this place. He had lost his brother and his sister as this area was being besieged. “We were climbing over bodies,” he said.

Only now, after demining, are families beginning to return to their plots in these villages, many coming on recce visits from refugee camps.

Surviving buildings are mostly unsafe and will have to be destroyed. And people here have little with which they can rebuild.

Not far away, life seems more normal. A Tamil fisherman wades into the Nanthidakal lagoon and casts his net. There is a jetty and fishing boats here, a low causeway across which trucks trundle into the town of Mullaitivu.
There is little evidence of what happened here in 2009. Huge numbers of Tamils fled from the besieged zone across this lagoon. On its shore the body of the dead Tiger leader, Prabhakaran, was filmed, his scalp covered to conceal the fact that much of it was missing.

There is something which jars. There are many new signs in the neighbourhood, giving for instance the name of the lagoon or the government’s account of what happened here during the conflict.

Indeed, a war “tourist trail” is already springing up for Sri Lankan tourists. But nearly all the signs are in Sinhala and English only – not in Tamil, the local language and, of course, the language of the people who lost so much.
This is repeated all over the area: at a museum of captured Tiger equipment; at Prabhakaran’s bunker, now a tourist spot.

At the bunker there are in fact many Tamil visitors including schoolchildren from nearby, and expatriates from Germany. A Sinhalese soldier, fluent in Tamil, acts as their guide. That is impressive. But there is barely a word of Tamil on the signs.

At two places we ask the military why this is. “There was not anyone who could speak the language, but we would like to put up Tamil signs soon,” one soldier says. Another, though, tells me he has mentioned it to the higher authorities – “but nobody is interested”.

What does this say for reconciliation efforts in this country, whose war sprang partly from the fact that Tamils had said they felt like second-class citizens?

There are more immediate concerns. Along with the struggle to rebuild, there is little employment available.

By chance we met a former Tiger militant. He said there were no opportunities and no jobs. But he did not want war again.

The army presence is still massive. Travelling across northern Sri Lanka is like criss-crossing from garrison to garrison.

In fact the number of soldiers on patrol has fallen sharply. They have been asked to reduce their visibility. And many places like the army-run cafes and shops which had sprung up, have now been closed.

But the government says it still fears a resurgence of the Tamil Tigers and it is not loosening its grip.
In one place an officer told us the army’s intelligence network had actually expanded.

“We’ve been asked to keep a register of what people do and where they go,” he said. “We even monitor schoolchildren’s activities. We know what people eat for their lunch.” courtesy: BBC