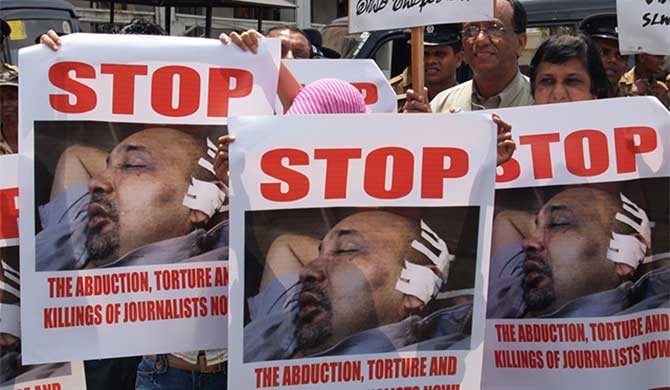 Image: Keith Noyahr not willing to come to Sri Lanka in person to identify his  abductors.

Girihagama made this remark when the magisterial inquiry into the abduction and assault of senior journalist Keith Noyahr was taken up before the Mount Lavinia Additional Magistrate’s Court yesterday.

Girihagama further said that there are provisions under No. 27 of the assistance to and protection of victims of crime and witnesses Act 2017 (amended version) to hold an identification parade through video technology.

In reply, SSC Girihagama stated that Mahara Prison Authority did the same when they produced the suspect before the Gampaha Magistrate’s Court. On that occasion, the Gamapaha Magistrate inquired from the Prison authority regarding the matter. Girihagama also stated that the former Army Intelligence Unit corporal Lalith Rajapaksa was arrested over the assault of former newspaper editor, Upali Tennakoon on July 8. During the Gamapaha magisterial inquiry into the Upali Tennakoon assault case, the Magistrate issued an order directing the Mahara Prison authority to produce the suspect before court for an identification parade with the coverings.

The Magistrate viewed the CCTV footage recordings in the court premises.

SSC Girihagama pleaded to conduct a special inquiry regarding the carelessness of the prison authority.

SSC Girihagama said Noyahr had sent an email to the CID stating that he was willing to participate for the identification parade through video technology. According to the previous statement given by Noyahr, he stated that he would able to identify two people if he sees them again.

“According to the statement given by the Army officer, who worked at the army safe house in Baduwatta Dompe, the officer revealed that former Army Intelligence Corporal Rajapaksa had taken a person to the safe house and he was the eye witness in this case. The witness also stated on his statement that the suspects used firearms to control Noyahr,” SSC Girihagama added.

SSC Girihagama said Noyahr who was the Deputy Editor of the Nation newspaper at the time of his abduction had previously refused to return to Sri Lanka even to identify his assailants in a court ordered identification parade last year. Noyahr and his family left for Australia soon after he was released by his abductors in 2008 and never returned save for brief visits, fearing reprisals. Keith Noyahr was abducted outside his home in Dehiwela on May 22, 2008.

The Mount Lavinia Additional Magistrate C.H.G Liyanage fixed for order to decide whether to conduct an identification parade or not, for August 6.