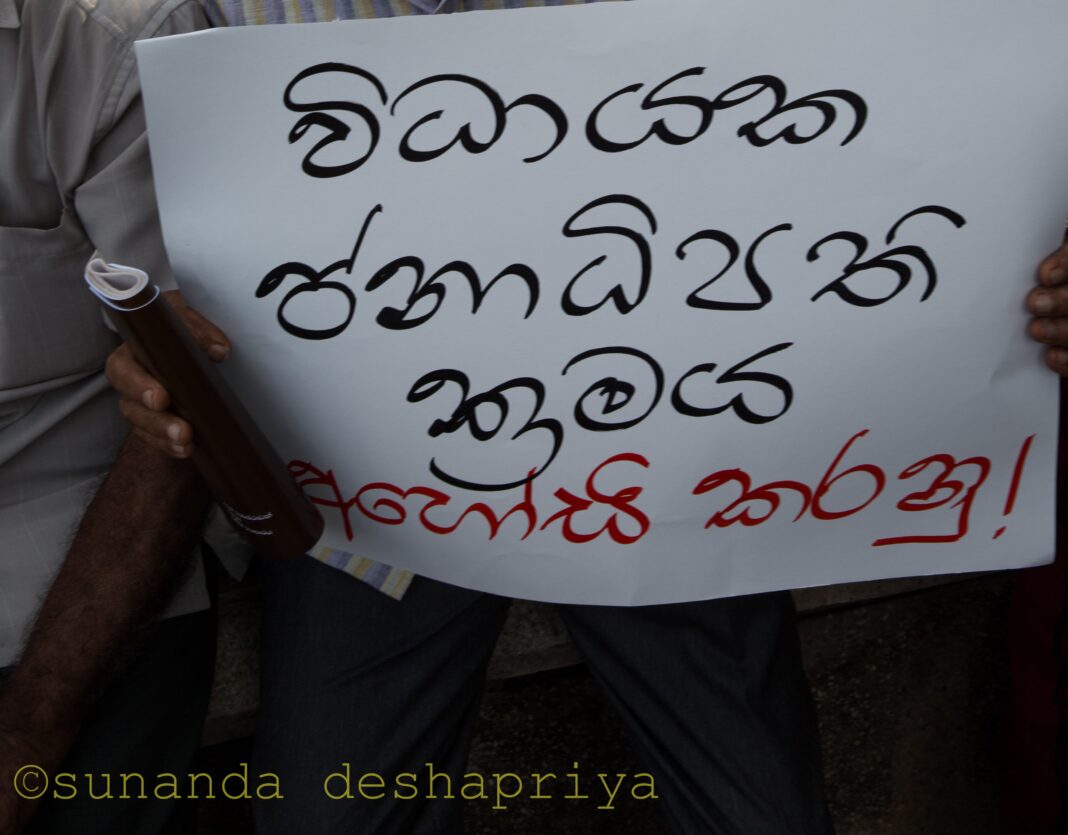 As the well known adage goes there are none so blind as those who refuse to see. If there was anyone who genuinely believed that the Executive Presidency was the answer to the country’s ills, the performance of the government after the enactment of the 20th Amendment must surely have dispelled any such belief. That is, unless they simply refuse to see what is obvious to any thinking person.

The Executive Presidency, by definition, is anti democratic. President Jayewardene in his celebrated justification of the centralisation of executive power in an individual, described the Executive Presidency “as not being subject to the whims and fancies of Parliament” (and therefore by extension not subject to the wishes of the people who are constitutionally deemed to be sovereign.)

“It is during the tenure of President Gotabaya Rajapaksa that the detrimental features of the Executive Presidency have been exposed in its most naked form.”

The underlying assumption was and is that one individual garbed in the cloak of the Executive Presidency is the repository of all wisdom and therefore best placed to lead the State in governance.

Even though Constitutionally the Executive Presidency is all powerful and has the effect of downgrading the Cabinet, all those who occupied the position in the past despite using the powers of that office whenever they thought it necessary, continued to work closely with the Cabinet and did take collective decisions.

This was true of J.R.. Jayewardene, R. Premadasa, Chandrika Bandaranaike Kumaratunga, Maithripala Sirisena and even Mahinda Rajapaksa. The only period when the Cabinet and the Executive President did not always work together was during the Maithripala Sirisena era but that was more due to policy differences with Prime Minister Ranil Wickremesinghe rather than the constitutional structure.

With the President’s penchant for placing more reliance on Presidential Task forces rather than the Cabinet, the situation has been greatly aggravated with the country being plagued by a myriad of problems. No wonder that Ven. Murutettuwe Ananda Thera, one of the Government’s staunchest supporters is on record stating that no government has become so unpopular in such a short time as the current government.

As a result, the gap between the Executive President and the Legislature too has widened with both institutions functioning in parallel worlds resulting in dysfunctional governance.

A recent happening brings out this phenomenon very vividly. Last week, the Committee appointed by the President to investigate the causes of leaks and explosions from gas cylinders and to recommend measures to address the issue met with President Gotabaya Rajapaksa to present its report and explain its contents.

Those present were the Members of the Committee, Presidential Secretary P.B. Jayasundera and a couple of other officials as evident from Television newscasts. Conspicuous by their absence were the Minister of Trade Bandula Gunawardene and the Minister of Consumer Affairs Lasantha Alagiyawanna who are the ones in the direct firing line vis a vis the whole gas issue.

They were the ones tasked with implementing government policy and would have benefitted immensely from the findings and explanations of the President’s Committee but were excluded from the meeting. This is but one of the many situations that reveal the disconnect between the Executive Presidency and the Cabinet.

The fertiliser fiasco is another example of the Executive President not having the benefit of the counsel of Cabinet Ministers. While the President’s own Election Manifesto is said to have envisaged a switch from Chemical based fertiliser to Organic fertiliser to be spread over a period of ten years, for some inexplicable reason the President decided to implement such a change overnight.

Even Professor Udith Jayasinghe Secretary to the Ministry of Agriculture has repeatedly pointed out that the overnight attempt to switch over to Organic fertiliser was ill advised. For his candid comments the former Vice Chancellor who played a significant role in drafting the Agriculture segment of the President’s Election manifesto has had his services as Secretary to the Ministry of Agriculture terminated. D. M.L.D Bandaranaike has been appointed as the new Secretary, (the fifth since this Government assumed office).

“A careful study of the colossal mistakes that the government has been making during its two years in office will reveal that such errors in governance are primarily rooted in the Executive Presidency.“

The net result of the Presidential decree to switch immediately to Organic fertiliser has been the collapse of the Agriculture sector with the drop in yield of many crops including tea and vegetables. The phenomenal rise in the cost of living is a direct result of the ill conceived decision and has not only impacted the public adversely but also caused a huge dent in the popularity of the government.

A careful study of the colossal mistakes that the government has been making during its two years in office will reveal that such errors in governance are primarily rooted in the Executive Presidency.

The situation is so bad as to amount to a national calamity. No excuses are required therefore to repeat the call for abolishing the Executive Presidency. The sooner this is done and replaced with a Wesminister style of Cabinet government that will ensure collective governance the better.

It is strange that many political parties which have campaigned for the abolishing of the Executive Presidency in the past are today silent on the issue. The quickest way to ensure relief for the long suffering public is to bring about more democratic governance by going back to the Parliamentary form of government.

A joint campaign by all like minded political parties will have the greatest chance of success in achieving this objective. Waiting for the next Election to bring about this critical change may be too late for the country.

With the increasing discontent expressed by Parliamentarians of the Government it may be not too difficult to convince them that it is in the National Interest to abolish the Executive Presidency. ([email protected])