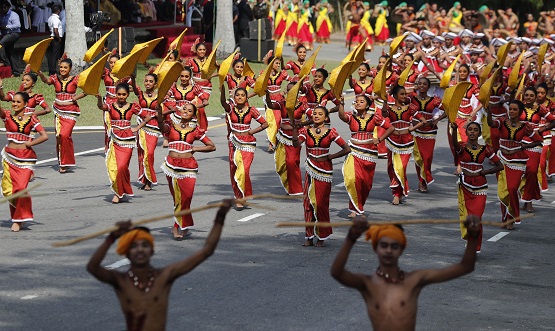 The 72nd Independence Day celebrations took place this year at the Independence Square under the auspices of President Gotabaya Rajapaksa. Those interested in national unity and national reconciliation anxiously waited to see whether the National Anthem would be sung in Tamil this year too as had been done in previous Independence Day Celebrations since 2016.

This was in the context of Public Administration Minister Janaka Bandara Tennekoon first making the announcement in December 2019 that the National Anthem would not be sung in Tamil at the Independence Day celebrations. The Ministry Secretary Hettiarachi subsequently stated that no such decision had been taken. In January this year when Prime Minister Mahinda Rajapaksa was questioned on the matter by a journalist he responded by stating that a decision on the issue had not been taken at that point of time.

There was hope therefore that the practice of singing the National Anthem in Tamil at the National Independence Day celebrations started by the Yahapalana Government in 2016 would be continued this year too. Unfortunately this did not happen.

The Government too has not made an official announcement explaining the reasons for doing away with the practice of singing the National Anthem in Tamil leaving room for speculation as to the thinking behind this retrograde step.

The call for singing the National Anthem in Tamil also is predicated in the belief that it will help the Tamil speaking people identify themselves with the country and give them a sense of belonging and dignity.

Although the majority of the Tamil people did not support the LTTE nor subscribe to the brutal and violent practices of the LTTE, the defeat of that organisation coupled with the triumph of extremist forces in the South certainly contributed to a demoralisation in the ranks of the Tamils who felt uncertain about their future in the country.

In such a context it behoved the Sri Lankan State to reach out to the Tamils and boost their confidence in order to integrate them as part of the Sri Lankan Nation. It is in recognition of this that the Yahapalana Government took a series of steps as part of the Reconciliation process. The permission to sing the National Anthem in Tamil was one small but important step in that direction.

Fresh on the heels of the January 8, 2015 victory the Tamil National Anthem was sung together with the National Anthem in Sinhala at a ceremony held in the Jaffna Peninsula in March 2015 to return privately owned land taken over by the Armed Forces during the war to the owners of such land. Present on the occasion were President Maithripala Sirisena, Prime Minster Ranil Wickremesinghe and former President Chandrika Bandaranaike. The fact that the Government had to face a Parliamentary Election in a few months and face the Sinhala Electorate did not deter the leaders of the Yahapalana Government from taking this important step in the process of national reconciliation.

The Sinhalese South too did not respond negatively at the August 2015 General Elections clearly showing that they entertained no fears of any steps taken in pursuance of a reconciliation process. In fact after the August 2015 Parliamentary Elections a coalition Government comprising the UPFA and the UNP was formed and the Tamil version of the Tamil National Anthem was sung together with the Sinhala version at the Independence Day Celebrations in 2016 and thereafter in 2017, 2018 and 2019.

What is difficult to comprehend is why such a hue and cry should be raised against singing the National Anthem in Tamil when it is Constitutionally provided for and in no way affects the sovereignity of the country nor does any harm to the Sinhala majority. Despite not having any adverse impact on the feelings of the majority community the singing of the National Anthem in Tamil, particularly in a post war context, can give a boost to the psyche of the minorities and thereby contribute to the nation building process.

The feelings that ran through the minds of the Tamil community following the singing of the National Anthem in Tamil at the Independence Day celebrations in 2016 are well captured in an article written soon thereafter for the Daily Mirror by veteran journalist D.B.S. Jeyaraj, now domiciled in Canada.

Jeyaraj describes his feelings as follows: “I was in a state of emotional ecstasy. I did something which I have not done before when Sri Lanka’s National Anthem was being played. I cried! I am not ashamed to say that! I kept clicking replay to see the clip over and over again. My eyes turned moist and tears kept trickling down my cheeks. I even sobbed a few times involuntarily. It was with the greatest difficulty that I controlled myself. When the Rupavahini camera panned on the distinguished gathering, I saw those very important children of the Sri Lankan mother – most of them Sinhalese- standing respectfully erect as the words rang out clearly in Tamil. It was truly a defining moment!”

“I realised that the land of my birth had embarked on a new and exciting journey. After decades of post – independence conflict fuelled mainly by ethno-linguistic contradictions, the nation at large was realising and recognising its pluralistic national identity. While Sinhala continued to retain its rightful place, the country was now moving forward on the path of inclusion and was prepared to accommodate what had been excluded before. The 68th Independence Day ceremony was a good omen of the brave, new Sri Lanka that was being envisaged by the new dispensation in power.”

“Above all the singing of the National Anthem in Tamil at the Independence Day event has conveyed a strong symbolic message to the Tamil speaking people that they and their language are an integral part of the evolving Sri Lanka.”

In an article written for the Daily Mirror this year, Jeyaraj refers to the precedent set in 2016, 2017, 2018 and 2019 in singing the National Anthem in Tamil at the Independence Day celebrations and goes on to say:

“The people of Sri Lanka were able to see and realise that the singing of the national anthem in Tamil was not harmful to the country or the Sinhalese majority in any way. As far as the Tamil people were concerned the right to sing the NA in Tamil did not mean that all their lost rights were restored and that they had achieved equal status with the majority on the Island. Yet the singing of the NA in Tamil at the independence day event was of symbolic value. It indicated bright prospects for equality, unity, harmony and amity in the future. “

The question then is why this positive step embarked upon by the previous government was done away with. Since the President’s media devision did not announce a decision to do away with a practice that had taken place for four consecutive years and the Cabinet spokesperson did not refer to any decision taken in Cabinet on this issue, it is difficult to fathom how such a far reaching decision that reverses a measure taken to promote reconciliation was taken. Surely the national interest demands that such a decision deserves careful and considered deliberation at the highest level before it is implemented.