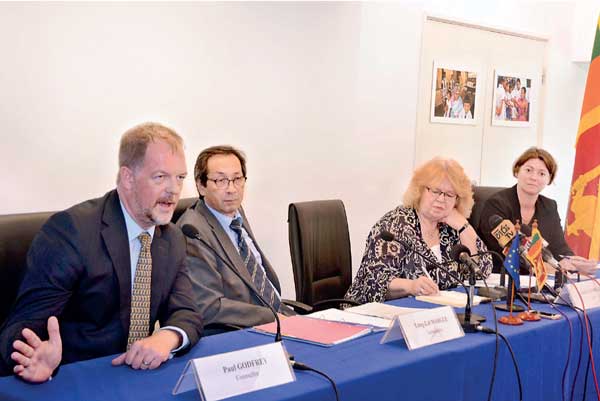 The leader of a delegation from the European Parliament urged Sri Lanka to improve human rights conditions, including the replacement of its tough anti-terrorism law, if it wants to regain lucrative EU trade concessions which the island nation lost six years ago, reports Fox News .

Meanwhile Colomo based Daily News reports that EU delegation saying that “the progress so far has been positive, but that much more needs to be achieved, especially related to the office of the missing persons, devolving powers to provinces, child marriage laws, gender equality, etc”

Jean Lambert has aid that  “the success of Sri Lanka’s application to get back the trade concessions depends on meeting the human rights requirements set by the EU.

She has emphasized that  Sri Lanka needs to replace its Prevention of Terrorism Act and amend its Code of Criminal Procedure to ensure the rights of detainees.

Lambert was heading a four-member inspection team to evaluate the human rights situation.

Sri Lanka could enjoy the GSP Plus facility till 2023.

Sri Lanka could enjoy the preferential tariff regime of General System of Preferences Plus (GSP Plus) facility with the European Union until as late as 2023, according to the sentiments expressed by the European Delegation in Sri Lanka.

GSP Plus is only awarded to countries in the low and lower-middle income categories as classified by the World Bank, and an upgrade to an upper middle income country makes it ineligible for the GSP Plus facility, according to EU Regulation 978/2012. “We’re expecting Sri Lanka to reach that (upper middle income) by 2019,” Political, Trade and Communications Counsellor, European Delegation in Sri Lanka and Maldives, Paul Godfrey, told Mirror Business.

He also noted that Sri Lanka will have to remain in the upper middle income segment for 3 years, plus another year where the EU will observe the situation, before the country becomes ineligible for GSP Plus. According to the Central Bank, Sri Lanka’s current per capita gross national income is US$ 3836, and the threshold for 2016 to be classified as an upper middle income country was US$ 4036. The World Bank is expecting Sri Lanka to grow at 4.8 percent this year, and just over 5 percent next year. “But the threshold also goes up each year,” Godfrey said. However, the threshold also declines, as it had in 2016, and the threshold saw a continuous decline over several years in the early 2000s.

Meanwhile, in response to a question whether Sri Lanka could compete with countries who can afford to produce goods cheaper, and have made inroads with their access to GSP Plus for the past 6 years, Godfrey noted that Sri Lanka depending on its leading export again would not be a good idea. “Going back to the EU with just apparel would be a mistake. Sri Lanka has to diversify. Now,” he said. The Sri Lankan government is expecting windfall of US$ 1.9 billion annually with the resumption of GSP Plus, mainly through apparel exports.

Sri Lanka could expect a decision on whether it is reinstated with GSP Plus privileges between January 13 and May 12, depending on how long the EU parliament decides to debate and put the issue to a vote. The EU delegation currently in the country was very diplomatic in providing answers, saying that the progress so far has been positive, but that much more needs to be achieved, especially related to the office of the missing persons, devolving powers to provinces, child marriage laws, gender equality, etc. “

A number of things are moving here in a positive direction, but it’s only the beginning of change. There needs to be a continuation and a deepening of what we have seen,” European Parliament Member Jean Lambert said.