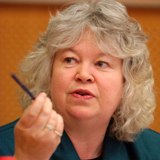 The visiting European Parliament delegation while praising the government’s development work and its achievements, stressed the need to implement the LLRC recommendations and a political solution. Delegation Head, Ms. Jean Lambert (Greens/UK) said that in terms of a political solution, there was much to be done expressed concern over the delay in implementing the LLRC recommendations made about an year ago.

Answering questions, she said that in comparison to her visit last year, there were lots of positive developments and positive engagements in the country, particularly developments in economic, health and education fields.

She said that they didn’t raise issues over abductions, however, the delegation queried recent arrests and differences of opinion on such issues.

They want to see a system in place, where everyone was equally treated, Ms. Lambert said.

The delegation flew to the East earlier this week to observe the challenges the area faces as it returns to normalcy and to monitor EU contributions to the development of the region through co-funded projects, especially in health and education sectors. The visit was done as a priority of the EU Parliament.