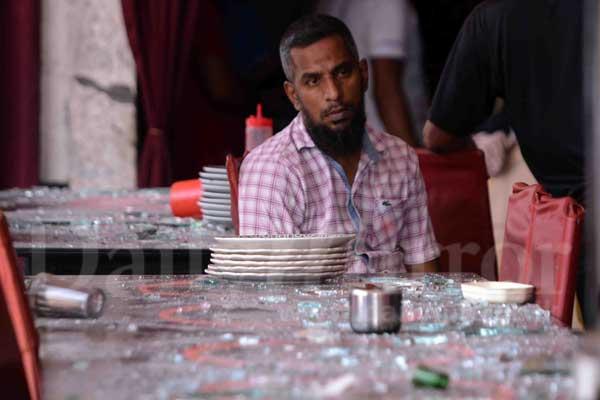 Image: A shop owner in Minuwangoda, Sri Lanka after his shop was set on fire by Sinhalese mobs.

Colombo, 12 June 2019 (The Delegation of the European Union (EU) issues the following statement in agreement with the embassies of France, Germany, Italy, Netherlands, Romania and the UK High Commission, as well as the embassies of Norway and Switzerland.)

We are deeply concerned by political and religious pressure being directed at Sri Lanka’s Muslim community which is undermining peace and reconciliation in the country.  Prejudiced and unsubstantiated allegations repeatedly published by media serve only to fuel intolerance.

We shared our views during a meeting today with the Prime Minister. On that occasion we welcomed the government’s commitment to address hate speech and to set up a religious reconciliation council.

We stand by all Sri Lankans working to preserve the peaceful coexistence between all communities, and expect religious and other community leaders to support them and speak out against violence.

We urge the President, Prime Minister, and all political leaders to reassert the state’s commitment to mutual respect, tolerance, and equal treatment under the law for all, irrespective of faith or ethnicity