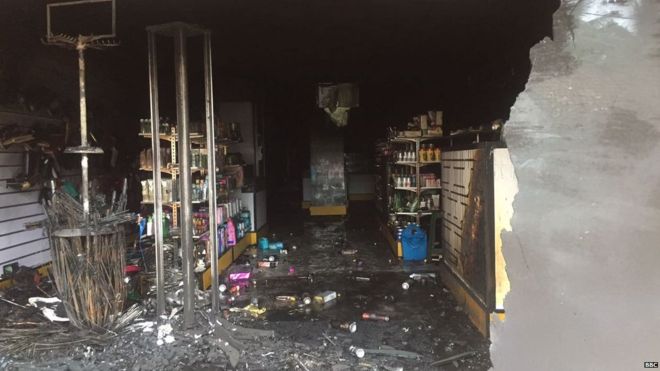 Post war Sri Lanka saw a wave of attacks targeting the Muslim community by Buddhist extremist groups. The Mahinda Rajapaksa government allowed these extremists free rein, which caused extensive damage, including injuries and the damaging of Muslim-owned property. This resulted in the Muslims voting en-bloc to overthrow the once indispensable Rajapaksa regime.

The regime change brought about a lull in Buddhist extremist activity but tensions restarted with land issues in Musali, when groups claimed that Muslim IDPs, returning from the 1990 eviction by the LTTE were being illegally settled within the Wilpattu forest reserve. President Maithripala Sirisena made public statements claiming that the former Minister Basil Rajapaksa who headed the Presidential Task Force for Northern Development had allocated land within the Wilpattu reserve. Later he retracted this statement, and said not a single inch of Wilpattu reserve had been encroached. The groups continued their campaign to deprive the Muslim IDPs of their right to return.

This led to a build up of campaign by the Bodu Bala Sena (BBS), the Sinhala Ravaya and Ravana Balaya. Soon, they were joined by a few more ‘Facebook warriors’ – Mahason Balaya, The Sinhale Jathika Balamuluwa (SJB) and Dan Priyasath who used new media technology to spread hate and violent messages. Most of these groups found this an opportunity to hoodwink Buddhist corporates and the Sinhalese Diaspora in South Korea, Australia, Europe and America to fund the saviours of Buddhism in Sri Lanka.

In the absence of stern action by the Government or the Buddhist hierarchy of Mahanayake’s, Ven. Gnanasara and company went on a major racist offensive against the minorities. Did Yahapalanaya consider these racist assaults as freedom of expression or did the Sirisena-Wickremesinghe government of good governance provide subtle support to these extremists in the hope that they could break the dominance of the Sinhala Buddhist vote bank by the Rajapaksa’s joint opposition? Evidence points to the latter as no action has been taken despite numerous police complaints and legal action instituted by Muslims.

The end of Sinhala and Tamil New year celebrations saw renewed assaults on the Muslim community by extremist Buddhist forces. Since the dawn of April 16th, there have been at least twenty incidents of violence or attempted violence, hate, intimidation and threats to the Muslims, their places of religious worship and business. These renewed threats are from Bodu Bala Sena, Sinhala Ravaya, Sinhale, Mahason Balaya to name a few.

The Secretariat for Muslims (SFM) a Muslim civil society organisation documented 538 incidents against the Muslims from 2013 to 2015. The following is a documentation of the violence against Muslims during the last 5 weeks:

Four shops owned by Muslims were attacked with petrol Bombs in Godapitiya, Porruva. This incident went unreported due to the pressure brought by the local police. This was not even reported in the social media by local residents, fearing further police intimidation. Even after a month, the police have still not been able to investigate and apprehend the perpetrators of this act of violence.

2 1/2 Acres of land owned by Muslims was forcibly taken over in Irrakamam in Mayakkali. No police action has been taken even after complaints have been lodged.

Ven. Gnanasara thero visited Irrakamam and made a very provocative speech violating his bail conditions. Police complaints have been made and no action has been taken up to to date.

Ven. Gnanasara Thero claimed at a press conference that refugees from Myanmar had arrived in Sri Lanka with the intention of invading our land. These refugees were arrested at sea by the Sri Lankan navy while they were attempting to flee to Australia by boat due to the atrocities of the racist Myanmar government. This statement was purely meant to provoke the Sinhala Buddhists.

Vesak celebrations with Bodhi pujas were held in Irrakamam in Mayakkali, a predominantly Muslim area with the intent to provoke, but the Muslims showed much restraint and no untoward incidents were reported.

May 14th 2017 : Threatening Muslims in Onegama in Polonnaruwa

A group of Buddhist monks led by Ven. Galagoda Aththe Gnanasara Thero threatened Muslims in Onegama in Polonnaruwa and broke their huts and livelihood means. The Police who were present did not attempt to stop this mob from causing this violence. Hiru TV showed the destruction of the huts of the Muslims. Here again, Ven. Gnanasara Thero insulted Allah subahanauwa ta’aala in the most derogatory and inflammatory way. Defaming of Allah subahanauwa ta’aala, is the most blasphemous insult that no Muslim will tolerate. Police complaints have been made with video evidence and they have failed to take any action yet.

15th May 2017 : Attack on the Muslim Village of Selvanagar in the Trincomalee District

The entire Muslim population of Selva Nagar in Thoppur (Tricomalee District, bordering Seruvila and Muthur electorate) were threatened by a mob of outsiders, led by Buddhist monks. A large number of Muslims have fled the area due to this intimidation. The local temple (Pansala) currently owns six acres and they are now attempting to claim 49 acres of Muslim lands insisting that these are archaeological sites. Muslims have been living and in possession of these lands for over a hundred years. Residents claim that these extremists are trying to drive them out as the LTTE did during the ethnic conflict.

It is suspected that extremist elements may have attempted to set the mosque on fire using a petrol bomb. This is the second petrol bomb attack. They had also set alight a garbage dump close by. No police action has been initiated.

Unidentified men had arrived on motorbikes and attempted to attack the mosque. When some workers who were doing renovation had come out, they had left on their bikes.

Once again, Ven. Gnanasara Thero insults Allah subahanauwa ta’aala in the most demeaning way at a press conference.

16th May 2017: Attack on Muslim Selva Nagar in Thoppur

A large group of Buddhist extremists numbering about 200 had gone to Selva Nagar in Thoppur with clubs and swords and caused extensive damage to 16 houses and property. No police action has been taken despite several complaints.

The Kohilawatte Mosque, in Sedawatte, was attacked with stones and clubs, around 1:30 p.m. by an unidentified gang, resulting in extensive damage. Wellampitiya Police has been provided CCTV footage of the attack and no arrests have been made as yet.

Two Muslim owned shops were attacked in Panadura and extensive damage caused to its furniture, equipment and fittings. One was a bakery and the other was a communications facility.

The Last Chance show room in Wennappuwa has been set on fire and burnt down completely on the night of 17th May. The losses are estimated at several millions.

A procession led by Ven. Gnanasara, which was going to Ibbagamuwa, was stopped by police. Thereafter, Ven. Gnanasara and other Buddhist extremists claimed that they were being stopped at the call of the Muslims and abused in raw filth. They called on the crowd that had gathered to attack the Muslims. Six petrol bombs had been hurled at the Mallawapitiya mosque causing damage. Police have not arrested anyone yet.

A cosmetic store owned by a Muslim was set on fire causing extensive damage. Police have still failed to make a comprehensive investigation.

A leather store belonging to a Muslim at Wijerama Junction, Maharagama has been set on fire during the night and completely burned, with heavy losses.

It is very clear that Ven. Gnanasara is attempting to prevent his arrest over the Homagama magistrate’s complaint of contempt of court and intimidation of witnesses. He is attempting to generate protests from the majority Buddhist community by claiming that he is being arrested on the charges filed by Muslims. He has continued to violate his bail conditions, and is aware that he has very little chances of evading arrest. The majority of Sinhalese who do not subscribe to Ven. Gnanasara’s extremism will not move a finger if this racist is arrested. It should be noted that he commanded a mere 27,000 Island wide votes at the last general elections.

The Government of President Sirisena and Prime Minister Ranil Wickremesinghe need to deal with this major crisis which will destabilise their hard earned victory in January 2015. The Muslim parliamentarians, civil society, business community and academia have requested the government to act with a strong resolve to ensure that rule of law prevails. A peaceful environment will ensure the rapid reconciliation of all peoples of Sri Lanka.