Environmentalists says no but Army is gung-ho

A four-wheel-drive motor rally organised along east coast early next month has raised concerns among environmentalists.
Commando 4×4, the six-day rally planned to start on August 4, is being organised by the Commando Regiment under its “Experience Sri Lanka with Commandos” project.

The rally will start from Point Pedro in Jaffna, ending at the Commando Regiment Training school at Uva Kudaoya in Moneragala, a distance of 775km.

The organisers say the rally will promote adventure sports in Sri Lanka to boost tourism.

Environmentalist Ravindra Kariyawasam of Centre for Environment and Nature Studies (CENS) said the rally will cross some environmentally sensitive areas and cause great harm to the habitat.

“Had the Environment Authority considered the true environment impact of this entire event? How long it will take to re-build the sand dunes naturally after 50 high-powered automobiles run over them?

“What will happen to lagoon habitat once a parade of four-wheel-drive vehicles cross them, killing many of its fish and water creatures? What effect will cause by the vehicle gases and noise to the wilderness of Eastern jungles and its livelihood?” asked Mr. Kariyawasam.
“Sri Lanka cannot offer its limited natural assets for the fun and thrill of a very small portion of the population which seeks a thrill in torturing Mother Nature.

“Army commandos always stood for the betterment of motherland and must take immediate action to preserve the good name of the regiment by making amendments to the event,” Mr Kariyawasam said.

Army media spokesperson Brigadier Ruwan Wanigasooriya denied the event would cause harm to the environment, saying the environmentalists’ fears were due to a misunderstanding that vehicles would go off-road along the full distance.

“This is not a race but just a rally aimed at providing an opportunity to explore the country. The vehicles will only use the existing roads when completing the first phases of the event and will not go off-road and damage environment. 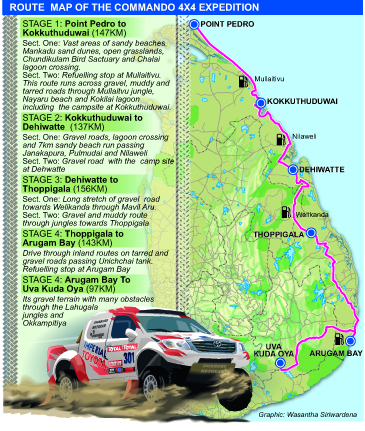 “The off-road event will be held on last day inside Commando Regiment Training Centre at Uva Kudaoya,” he said.

Brig. Wanigasooriya said that due to their training the commandos knew how to blend with nature without destroying it.

“For example, we do not allow vehicles to be modified to emit loud engine noise. The rally ends at 4pm every day, not to disturb wildlife at night. The participants have to complete only around 150km daily so drivers would not need stressful high-speed drives that could disturb the wildlife,” he said.

The website designed for the rally states that 50 vehicles will be allowed to participate the expedition with a maximum of four persons per vehicle. It gives rates ranging from Rs. 20,000 for one person for the first stage to Rs. 55,000 for all five stages. For four persons to participate all stages, the cost is Rs.190,000.

The website further states that these fund-raised by the rally will be used for Commando Regiment’s infrastructure improvements.