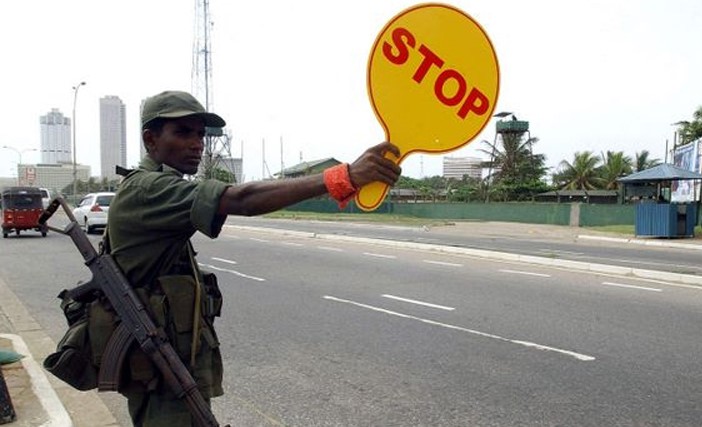 In decades of the dreaded Public Security Ordinance (PSO) in Sri Lanka, this is perhaps the first time that the use of this law has been justified by the Office of the President as necessary to ensure the availability of staples such as rice, dhal and sugar to the populace at reasonable prices.

Our decades long lists of emergency regulations under various Presidents, all of them acting predominantly on the need to secure power rather than ensure the security of citizens, do not inspire confidence.

‘Does it need the PSO to rein in robbers?’

What an extraordinary fall for the mighty PSO, one might well chuckle. Even as the Government’s lawyers employ the full strength of their (palpably unconvincing) lungs to emphasize the awful consequences of the deployment of the PSO and the terrible fates that will befall crooked hoarders of essential supplies, the truth lies elsewhere. Furious citizens on the street, traipsing from store to store to buy what earlier used to be freely available, vent their outrage in no uncertain terms. ‘Does it need the PSO to rein in robbers who are hoarding rice?’ one enraged man asked.

‘If so, what is the point of declaring maximum retail prices of food items through gazettes and what is the use of the Consumer Affairs Authority?’ he bellowed. ‘This shows how they have reduced the gazette to a joke’ someone else said. They may well have added that not only the gazette but the PSO itself has been reduced to the state of a grinning cheshire cat. Indeed, the framers of the PSO (1947) may have been forgiven for not anticipating this extraordinary eventuality when they drew up a ferociously harsh law meant to deal with threats aimed at the existence of the State.

Ensuring rice, dhal and sugar to citizens would have been the furthest from their minds, we hazard reasonably enough to guess. Of course from one standpoint, the implications of this week’s Proclamation by President Gotabhaya Rajapaksa declaring a state of emergency and consequently bringing Part Two of the PSO into operation forthwith, is serious enough. The Opposition is shouting itself hoarse, warning that this is one more step towards authoritarianism. Certainly the Government’s stated reason for doing so, namely to catch rogue traders wears very thin indeed.

Of what earthly use are state oversight bodies?

This is particularly when some of those very companies are closely associated with elements in Government ranks. Of what earthly is law enforcement, state oversight bodies such as the Consumer Affairs Authority and the entire edifice of the State if robber barons who hoard essential supplies cannot be caught? Surely the rank inefficacy if not manifest corruption of Government Ministers cannot form a basis for declaring a State of Emergency? From the Standards Institution which was caught on the wrong foot some months ago by flipflopping on the issue of contaminated coconut oil, we have the Consumer Affairs Authority spluttering in explanations as to why it cannot move to harsher action against clearly thieving traders.

The truth is that, these thieves, like Ali Baba and his forty thieves, (except that here, the numbers are far greater than forty), are hand in glove with the politicians and with the police. Unedifying dramas of midnight raids on stocks of rice and sugar in warehouses are obligingly enacted by the whipped media for our entertainment. It is not as if the citizenry does not know either; judging by the pungent comments that we hear. But there is a risky side to this adventure quite apart from the Government making the emergency itself somewhat of a caricature.

Due to a looming food crisis being trotted out as justification to employ the PSO, international media has started likening Sri Lanka to Lebanon which is teetering on its knees as the unfortunate Lebanese people cannot even buy bread to satisfy their hunger. As a United Nations study released earlier last month revealed, an astounding 80% of the Lebanese populace are living below the poverty line. The report pointed out that,“extreme poverty – also known as ‘food poverty’ – increased threefold from 2019 to 2020, rising from 8 per cent to 23 per cent.”

Use of the PSO does not inspire confidence for good reason

Emphasizing that the Lebanese lira has lost more than 90 per cent of its value since October 2019 leading to scarcity of food and fuel, the report pointed to electricity becoming irregular, steep unemployment and long queues at petrol stations. These sights raise nightmares for the Sri Lankan people given the state of non-law that prevails with announcements by Ministers contradicting each other and now, the emergency being dragged out of the closet as a solution. All the negativity that surrounds the deploying of the PSO is buttressed by our history and with good reason thereto.

Sri Lanka’s Second Republican Constitution (1978) brought in certain constitutional safeguards by stipulating specific Parliamentary control over a Proclamation of a State of Emergency with approval to be given within specific time periods. However, all these safeguards can be rendered nugatory if the Parliament itself does not observe checks and balances and dances to one political tune. Moreover, in these days of frequent adjournment by the House due to covid-19, the difficulties in ensuring that the state of emergency is not abused, is far higher.

The PSO provides further that once Part II of the PSO is in operation as aforesaid, the President is empowered to make such regulations as appear to him to be necessary or expedient in the interests of public security and the preservation of public order and the suppression of mutiny, riot or civil commotion or for the maintenance of supplies and services essential to the life of the community. Our decades long lists of emergency regulations under various Presidents, all of them acting predominantly on the need to secure power rather than ensure the security of citizens, do not inspire confidence.

The old illusion that emergency regulations cannot be questioned by a court of law has, of course, long since been displaced. The Supreme Court has exuberantly (if I may use that term) ruled on emergency regulations being unconstitutional in any number of cases as legal practitioners are only too familiar with. Judicial interpretation of the power to arrest and detain under emergency has significantly restricted the ambit of emergency powers. In fact, even where Proclamations are concerned under relevant statutes which are the prerogative of the executive, the Court has not considered them sacrosanct.

In one relevant instance, a Referendum Proclamation was struck down by the Court and the legal bar prohibiting judicial review was summarily dismissed, (Senasinghe v Senior Superintendent of Police, Nugegoda and three others, SCM 17.3.2003). The question as to whether the Court lacked jurisdiction to determine whether the Proclamation was valid and/or whether it had been duly formulated, because those were ‘political questions’ was not accepted. This bar was firmly rejected on the basis of accepted principles that all powers and discretions conferred upon public authorities are to be used reasonably, in good faith and upon lawful and relevant grounds of public interest.

The Court held that these powers are not unfettered, absolute or unreviewable. The legality or propriety of their exercise must be judged by reference to the purposes for which they were conferred. In this regard, the Court reiterated principles relating to the immunity of the President which only provided a shield of personal immunity from legal proceedings, leaving the impugned acts themselves open to judicial review. These principles, earlier applied to actions of the Commissioner of Elections, were then applied to directions issued by the IGP.

On different realities and the limits of endurance

These salutary warnings of the limits of executive power are even more relevant given that the 20th Amendment to the Constitution continued the liability of the President for challenge on violations of fundamental rights brought in by the 19th Amendment. But these are all legal quibbles. What matters most at this point is the practical impact of the Proclamation of the State of Emergency for Sri Lanka. Is this what the Vistas of Prosperity and Splendour portends for its once adoring fanbase?

“I am not crazy; my reality is just different from yours” said the Cheshire Cat to a befuddled Alice in Wonderland. Perhaps this is what the Government is telling to its infuriated vote base, now starving in eking out a bare existence.