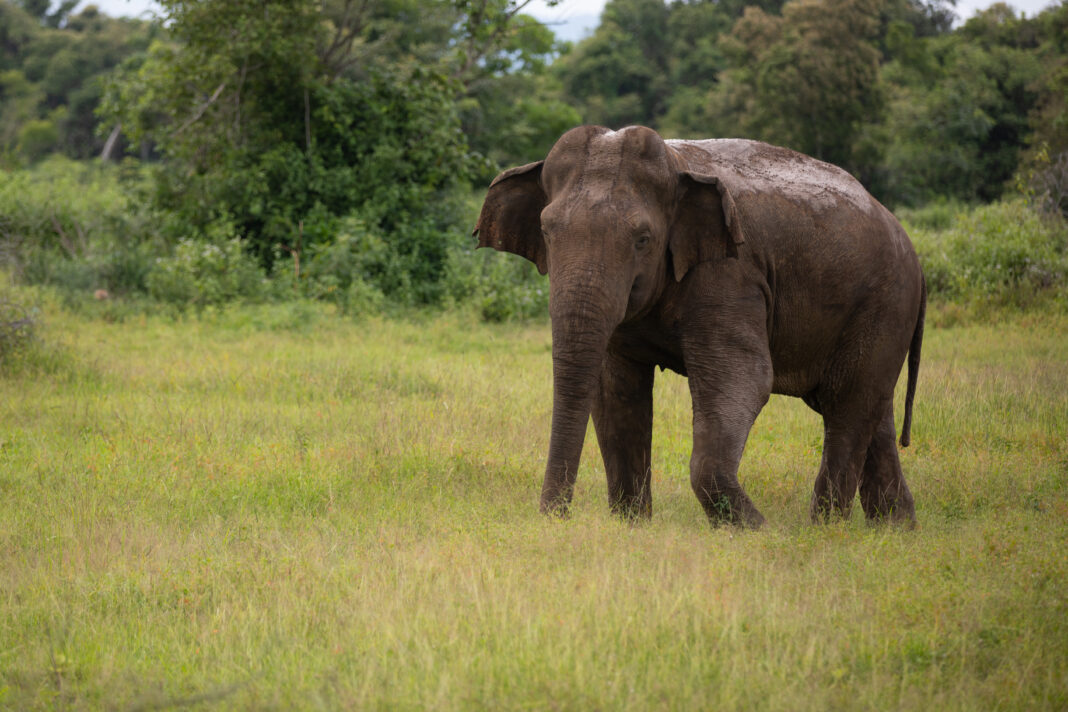 Even as elephant habitat gradually recedes, as it has over the last few decades, and elephant corridors are blocked in the name of ‘development,’ elephants in Sri Lanka are dying in higher numbers. At least one elephant dies here every day, with the majority of these deaths attributed to the Human-Elephant Conflict (HEC).

Setting another dubious record, last year guns felled most elephants (58), overtaking the horrific jaw bombs or ‘hakka patas’ (55), which was the leading cause of death the year before.

“At the rate we are killing elephants and if we continue in this manner, elephants will go extinct in 25-30 years,” warned Wildlife and Nature Protection Society (WNPS) President Jehan CanagaRetna, speaking to The Sunday Morning.

CanagaRetna attributed the rising numbers of deaths to shrinking elephant habitats and the blocking of elephant corridors, along with the fact that some elephants have now got used to raiding as it provides them with better food.

Blocking their pathways also results in elephants breaking into farmer communities: “The mitigation plans seek to prevent construction along these corridors, but successive governments have not moved to put this into action.”

‘On the right track’: DWC

Department of Wildlife Conservation (DWC) Director General Chandana Sooriyabandara told The Sunday Morning that an analysis of elephant deaths in the last year had shown that the department was on the right track in terms of tackling HEC, as the number of HEC-related deaths had dropped.

“The percentage of people purposely killing elephants has dropped, but an increasing number of rotting carcasses have been found in forests during patrols. Jaw bombs and poisoning incidents have lessened. The overall rise in deaths cannot be attributed to HEC; the number is high as the information being received about carcasses via patrols has increased,” he noted.

However, Sooriyabandara conceded that there had been some incidents of conflict in areas that had been newly developed, causing harm to elephants, while there had also been a few more train accidents than usual. “We are continuing programmes to tackle this. There were some changes in train schedules; when this happens, the animals are not able to adapt immediately,” he pointed out.

Shared space, a recipe for disaster

A key strategy in minimising HEC over the decades has been the attempt to limit elephants to protected areas and temporary corridors, which has proved to be unsuccessful. This comes as no surprise given that people inhabit 82% of Sri Lanka while elephants range across 62% and they share 44% of the same space. Furthermore, 70% of Sri Lanka’s elephants live outside its national parks and an elephant’s home range is 200 km.

“HEC has been happening for the last 60 years. Elephants and humans live in 44% of our land mass and that’s a recipe for disaster. It can be worked out to some extent as long as their pathways and corridors are not deforested or blocked, but so much living together will create this problem. Elephants won’t back down – they are very intelligent and after a while they understand they can’t take this anymore and decide to fight back,” explained CanagaRetna.

Commenting on the record number of elephant deaths, the WNPS President noted that in the last three years, there seemed to be a lot more chena cultivation going on due to people losing jobs and moving back to their villages amid the Covid pandemic: “I believe there may have been a lot more illegal cultivation and more confrontations between elephants and humans, hence the increase in the last two years.”

Meanwhile, a study carried out at the Yala National Park by the Centre for Conservation and Research (CCR) found that 54% of all elephant calves died within two years of birth due to malnutrition.

“According to scientific work done by Dr. Prithiviraj Fernando and Dr. Sumith Pilapitiya, in the two main national parks that have elephants – Yala and Udawalawe – calves seem to be dying within two years and those remaining within the parks have very bad body conditions due to habitat loss, especially with thousands of cattle being put into the national parks,” said CanagaRetna.

President Ranil Wickremesinghe recently appointed former Director General of the DWC Dr. Sumith Pilapitiya as Chairman of the committee appointed to implement the National Action Plan for the Mitigation of Human-Elephant Conflict.

This action plan was prepared by a committee appointed by former President Gotabaya Rajapaksa and chaired by Dr. Prithiviraj Fernando, while Dr. Pilapitiya was also a member. The plan was presented to the Government in December 2020.

Speaking to The Sunday Morning on steps being taken to address HEC via the action plan, Dr. Pilapitiya said that certain aspects of the plan needed to be institutionalised and two meetings had been held in this regard so far.

“We are looking to install seasonal agricultural fencing around paddy tracts and community-based village fences around villages. Dr. Fernando has been successfully implementing this model in the North Western and North Central Provinces and we are adopting it in areas where there aren’t adequate forests,” he explained.

Dr. Pilapitiya also noted that at present most of the electric fences that had been erected had elephants on both sides, which did not make any sense, and that 50-70% of the fences were located on the administrative boundary of the DWC. The committee is now working with the DWC to relocate some fences along ecological boundaries.

“Most DWC land is surrounded by Department of Forest Conservation land. While humans understand administrative differences, elephants do not. Elephants only understand the ecology. Therefore, fences that are within forests should be relocated to the ecological boundary. In areas with fragmented forests, you have to surround what you want to protect – the village and the paddy fields. That is the fundamental difference between the previous approach and now,” he said.

Emphasising that the Government was cooperative, he noted however that this was a new concept that had not been institutionalised yet: “To do community-based village fences, there has to be a Government agency associated with it. The DWC does not have the manpower and the direct relationship with villages to get involved in community fences. There is a Grama Niladhari (public official) in each village and we are trying to get the community-based village fences to be implemented by the community and facilitated by the Divisional Secretariats.”

“The first two meetings were to try to institutionalise community-based village fencing under the Divisional Secretariats. In terms of paddy field fencing, the Government agency that is involved in paddy fields is the Department of Agrarian Development. We are having discussions with the respective agencies and they are more or less in agreement in principle.”

He also noted that the Government had allocated a nominal amount of money in Budget 2023 for implementation due to budgetary constraints. However, he revealed there were ongoing development projects funded by the World Bank and Asian Development Bank in the Anuradhapura and Kurunegala Districts engaging in irrigation and agriculture support which had some provision for village fencing.

“For 2023, we are trying to focus only on Anuradhapura and Kurunegala, which is where the money is available to do something. Based on the performance, the Government is most likely to allocate money in Budget 2024 to expand this nationwide,” Dr. Pilapitiya stated.

Commenting on methods of mitigation, CanagaRetna noted that currently there was no single mitigation method that worked, adding that they were also looking at seasonal village fencing.

He said that it was also important to figure out a way for people in farming communities to earn money from the elephant: “If they earn something from the elephant, they are less likely to kill it, but the problem here is that people will start exploiting the elephants. It has to be done in a highly sustainable manner as an HEC mitigation measure.”

CanagaRetna further said that while the majority of people felt they should not be killing elephants, some were hell-bent on stopping the elephants – similar to their approach with leopards.

Outlining immediate measures needed to bring down the number of deaths, he said: “The immediate need is to carry out the action plan for mitigation. Stop moving humans into habitats that are vulnerable; this is still continuing. In key areas with high elephant and human deaths, like Ampara and Galgamuwa, some of those people will have to be moved away. Otherwise it’s never going to stop.”

Commenting on the National Policy for the Conservation and Management of Wild Elephants in Sri Lanka, which was presented in 2006, Dr. Pilapitiya emphasised that it was still relevant and needed to be implemented.

WNPS President CanagaRetna also emphasised that the national policy was something Sri Lanka needed to strive towards achieving and that all stakeholders had to push it through if we were to save Sri Lanka’s elephants.

The world-famous ‘Elephant Gathering’ in Minneriya has seen dwindling numbers over the last few years, with the release of unseasonal waters into the Moragahakanda Reservoir since 2018 by the Irrigation Department authorities.

Thankfully steps are now being taken to reverse this situation, following representations by WNPS and other wildlife protection bodies.

“The Moragahakanda project, which they are now reversing, has had a huge impact on the ‘Elephant Gathering’. The Irrigation Department has now agreed to maintain the levels of water that were there during drought seasons and reduce flooding of the plains. We are yet to see this in operation; this year is the first time we will see it. They tried to do it last year, but it was not as successful,” said WNPS President Jehan CanagaRetna.

WNPS stated that since 2018, there had been a reduction in numbers at the peak of the ‘Elephant Gathering,’ with 2021 showing a drastic 95% decrease. It warned that in addition to the phenomenal loss of tourism revenue – a wild elephant is estimated by economists to be worth $ 11 million if allowed to live its full lifespan – the Human-Elephant Conflict (HEC) in the surrounding areas had also exponentially increased.

“Elephants and their movements are triggered by historical experience. Even the slightest increase in water levels triggers the unexplained movement of several herds out of Minneriya, regardless of the available grasslands,” WNPS asserted.

How many elephants attend the ‘Elephant Gathering’?

How many elephants does Sri Lanka have?

According to the last count done by the Department of Wildlife in 2011, the number of elephants in Sri Lanka was recorded as 5,800.

However, Sri Lanka is a difficult country in which to count elephants given its high tree cover, said WNPS President Jehan CanagaRetna.

“One of the methods the Department of Wildlife Conservation used in 2011 was to place people in all water holes around the country and start counting in a given hour. It is not a foolproof method but can give an indication and they said 5,800 at the time.”

CanagaRetna believes the number could be lower now, while some opine it could be higher, but there is no data to support either of these views at present. The Department of Wildlife is expected to carry out another count this year.