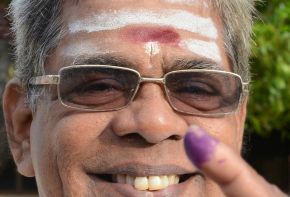 FIRECRACKERS at dawn and a few weary smiles. As Jaffna’s palm trees swayed in the wind, northern Tamils in Sri Lanka were celebrating cautiously on September 22nd. Their favoured party all but swept the board in provincial elections the day before. The Tamil National Alliance (TNA) scooped up 30 of 36 contested seats. Municipal and other local elections have been held here since 2009, when Sri Lanka’s three-decade long civil war ended. But this was the biggest poll, a test of northern Tamils’ perception of their place in the country. The ruling party of Sri Lanka was heavily defeated.

Voting, the day before, was a defiant affair. A steady flow of people got to polling stations, though some reported irregularities and other worries. At half a dozen stations in and around Jaffna, your correspondent saw groups of men who wore civilian clothing, but military haircuts. They loitered near the polling booths and kept an eye on the voters. Police (under civilian control) at one spot in Jaffna confronted two of these men, who were evidently working for military intelligence. Some voters said they felt uneasy. Others spoke of ballot papers distributed to pro-government supporters in one shanty town, and TNA backers whose names were mysteriously struck off the voters’ rolls.

Yet none of that was enough to disrupt the election significantly. Tamils say that their surveillance and harassment is routine. Formerly done by men in uniform, it is more routinely done today by military-intelligence types in civvies. The TNA had originally been associated with Sri Lanka’s rebel army, the Tamil Tigers or LTTE, which was defeated on the battlefield in 2009. This year the TNA campaigned with demands for freedom from repression, greater autonomy for the Tamils and an end to the army’s forced displacement of Tamil families from their ancestral lands. The army is said to have commandeered many thousands of acres of it across the north of Sri Lanka in recent years.

The election would probably not have happened at all but for pressure from neighbouring India (whose own Tamil population campaigns for Sri Lanka’s Tamils) and the fact that Sri Lanka is due to play host to a meeting of the leaders of Commonwealth countries in November. Anxious to avoid any embarrassing boycott, the government of Mahinda Rajapaksa went ahead with the provincial poll for the north, though the TNA was widely expected to win. Earlier Mr Rajapaksa had felt compelled to allow a tour of northern Sri Lanka by the United Nations’ high commissioner for human rights, Navi Pillay. She is supposed to present a report on her trip on September 25th. She has already spoken of a drift towards “authoritarianism” in Sri Lanka, while on her visit.

The election’s result matters for three reasons. The TNA will form a government for the first time, always a harder job than carping from opposition. Whereas the past four years have brought rapid road-building, electrification and other infrastructure gains to the north, Tamils say repeatedly they care more about achieving political autonomy. Now it is up to the TNA to try to turn a symbolic victory into something real, without stoking fears elsewhere in the country that Tamils would again seek secession.

Nationally it matters too. Any reconciliation between Tamils and the Sinhalese majority depends on relations between the northern provincial government and Mr Rajapaksa’s national one. The Tamils want powers over policing and land distribution, plus funds earmarked for development. The national government, by contrast, may try to change the constitution in order to undo a prior commitment to devolve power.

The new chief minister of the northern province, Canagasabapathy Viswalingam Wigneswaran, chatted to The Economist the morning after his victory. A moderate Tamil lawyer with Sinhalese relatives of his own, he might be willing to reach out for compromise with leaders in Colombo. However some of his more opportunistic comments from the campaign trail, including praise for the LTTE’s violent leader, the late Prabhakaran, could instead encourage Sinhalese hardliners to reject him.

Finally, the provincial polls give a hint that a national, presidential, election could be called sooner rather than later. In all, three provinces held elections on September 21st. Though the ruling party did badly in the north, it remained dominant in the other two. If the Commonwealth meeting goes well, Mr Rajapaksa may surmise that voters are likely to back him for a third term. A poll held at some point in 2014 might be soon enough for him to benefit from the Sinhalese majority’s abiding satisfaction that the war is over. Waiting much longer might give worries over the economy, or the slide to authoritarianism, the chance to come to the fore.
(Picture credit: AFP)
Economist