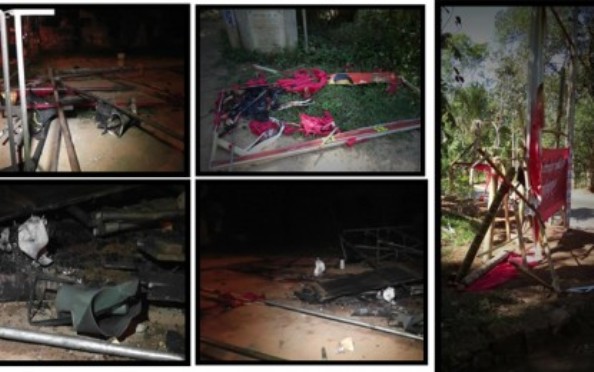 [Attacks on JVP election campaign in Monaragal; photo: NewsFirst]
The question that is being asked in all quarters these days is, has the Elections Commissioner been rendered inconsequential in the face of certain victory beginning to look increasingly iffy for the ruling party candidates, or is he just incompetent? The question takes on added significance as Uva unravels into a violent mess ahead of the 20 September provincial polls and the candidates of the ruling cabal up the Richter on campaign splurge, abusing government resources – funds, personnel and even power. And through this upheaval the man who is charged with the responsibility of preventing such abuses and upholding the law, the man who is appointed under an Act that bestows on him wide and extensive powers, opts to play modern day Nero.

The manner in which the Commissioner has sidestepped his responsibilities, caved into pressure and allowed the situation to exacerbate to a point beyond redemption, has not only caused irreparable damage to the system but also seriously contused the democratic process, demeaning the right each and every citizen of his country holds most sacred – the right to a secret ballot.
What is inherent in the right to a secret ballot is ensuring a level playing field for all the players on the field. And ensuring that is the sole responsibility of the Elections Commissioner. He simply cannot pass the buck, for the buck literally stops at his desk. He has the powers to direct the Inspector General of Police, especially during an election campaign, to do his bidding. Sadly, not only has the Commissioner neglected those responsibilities and helped tilt the playing field in favour of the ruling party, he also goes around sniffling that the Police won’t listen to him.

No wonder then that the United People’s Freedom Alliance (UPFA) candidates are openly defying all election laws with a greater sense of impunity. They roam the streets in Badulla and Moneragala Districts in government vehicles, have a surfeit of government servants at their disposal for campaign duty, even the house to house visits, and set up office in government buildings with no qualms about the public resources that are being used and abused.

What is going on in the Uva Province is the barefaced misuse of public funds and resources. But the Commissioner has opted to take no action, other than pontificate on the sacrosanctity of the election laws. It is one massive joke. And the joker is the Commissioner of Elections. The ridicule the dynamic process of law and order has been subjected to, is unprecedented.

The Executive powers that some Cabinet Ministers are brandishing, the impotent response from the Department of Elections on the one hand and Police on the other and the sheer apathy the general public are displaying may tell a very sad story whose last chapter is yet to be written. The beginning and the middle of that tragedy are being chronicled right now in Uva and the contents are not very encouraging. In such a gloomy atmosphere of government’s thuggery and perfidy, what can one say?
Yet the people deserve what they get. If the people at large decided to turn a blind eye to election laws being violated by those who are supposed to be the very custodians of those laws and if they choose to barter their birthright away for temporary gratification dished out by the powers that be, then this country’s precious process of free and fair elections will be lost forever.

The option before the Commissioner of Elections is clear: Does he want to preside over the ultimate demise of that sacred right that was granted to us by the British colonial powers as far back as 1931? If the Commissioner opts to discharge his duties as per chapters and verses of the Election Law of the country, then he would have saved the day not only for himself but more so for the democratic process of the country. To do nothing is not an option. Either he could be a puppet or a total nincompoop.

Nevertheless, all is still not lost. More than two solid weeks are left for the Uva PC elections. All we ask the Commissioner to do is to uphold the law and give everyone a fair and equal chance. That is the essence of human dignity.
Editorial, Ceylon Today