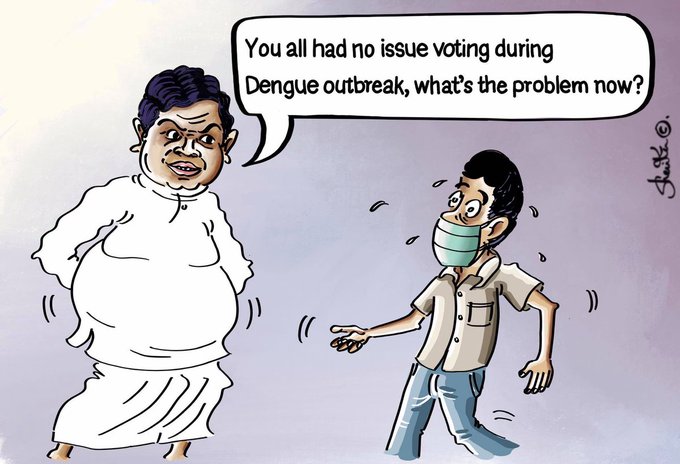 It is a modern morality tale about the dangers of misusing the military, of militarising civilian tasks, of expecting generals to handle pandemics. By 9th May, Sri Lanka had 847 officially acknowledged Covid-19 cases. Of these more than half were military personnel. The number of infected naval personnel alone tops 400.

When Covid-19 pandemic gripped the world, President Gotabaya Rajapaksa responded in a singular manner – he placed the military in charge. The army commander, and not a medical professional, was made the head of the presidential task force against Covid-19.

The result has led to a tragedy of errors.

It is one thing to use the military to provide support services to health professionals. It is quite another thing to entrust virus-resistance to the military. In Sri Lanka, a large number of navy and army personnel were deployed in a variety of tasks for which they had neither the knowledge nor the experience. It doesn’t seem as if the men were provided with a basic training prior to deployment or given adequate protective gear during deployment.

Then, in a crowning error, they seemed to have been given leave and allowed to return to their homes with no testing.

Had medical officials been in charge of our Covid-19 counter-measures, such obvious mistakes could have been minimised, if not avoided altogether.

It didn’t take long for the military to become part of the problem it was supposed to solve, for the uniformed enforcers to turn, unknowingly and through no fault of their own, into patients. Sri Lanka’s infection curve marked its steepest hike thanks to this inane error. In a four day period, the number of officially acknowledged patients rose by 200, most of them naval personnel from the Welisara camp or their kith and kin. The toll continues. Of the 12 patients reported on May 9th, ten were from the camp and the other two their contacts.

Like with the original Charge of the Light Brigade, the fault lies not with the men who had no choice but to follow orders. The full responsibility for the ongoing disaster lies with the military top brass – and the president who placed these medical neophytes in charge of dealing with one of the deadliest health crisis in human history.

Sri Lanka is probably the only country in the world to entrust a general with the task of beating a viral epidemic. The disastrous outcome of that decision demonstrates, yet again, the danger of militarising civilian spaces and civilian tasks.

President Gotabaya Rajapaksa met with print and electronic media heads on March 5th. The parliament had been dissolved. Though Covid-19 was rapidly assuming pandemic proportions, the Rajapaksa regime believed Sri Lanka to be safe – and was even promoting the island as a coronavirus-free tourist destination. The government’s true focus was on winning a two-thirds majority in the upcoming parliamentary election.

During the meeting, President Gotabaya lambasted the 19th Amendment and the independent commissions, and expressed his desire to win a two thirds majority in parliament to get rid of these impediments. He made clear that in his Sri Lanka, the president should not have to follow the constitution; the constitution should follow the president. “One term is enough for me,” he said, “but I must be able to deliver in that term and the Constitution must allow it,” (Financial Times – 5.3.2020).

Then, on March 11th, the pandemic intervened.

The President kept the country open until the nomination process was complete. Then he imposed an island-wide curfew and entrusted the military with the task of defeating the virus, quickly and on the cheap. Vanquish the virus, declare victory, and cruise to a landslide election win – that was clearly the Rajapaksa game plan.

But the war-like mentality and the militarised approach meant that not much heed was paid to warnings from health professionals. Even basic commonsense was in abeyance. Given the imported nature of the virus, it would have made sense to close down the airport completely, before closing down the country. Yet, even after the country was locked down, some incoming Lankans were allowed to return home sans testing or quarantine.

As the Assistant Director of the State Intelligence Services, Parakrama Silva, pointed out in an interview with the state-owned Rupavahini, the virus travelled in Sri Lanka via seven large clusters: Cluster of the Tourist Guide (11th March), Cluster of the Gem Merchant, Foreign Cluster (Returnees from Italy, Dubai), Cluster of group of people returned from a religious event, Suduwella Cluster, Cluster in Bandaranayake Mawatha and Navy Cluster (Newswire – 2.5.2020).

This analysis proves that if the government had followed a policy of quarantining all arrivals, the country could have been spared the two-month curfew. And had the government placed doctors and not generals and admirals in charge, the last and the deadliest of clusters, (which turned the Welisara navy camp into the new virus epicenter), would not have happened.

This litany of avoidable errors begs some questions.

Why were several groups of late returnees, especially from India, not sent for quarantine?

Were navy and army personnel used in ‘anti-coronavirus operations’ given at least a basic training about how to deal with a virus?

Were these personnel provided with adequate protection gear?

Were they housed separately from their colleagues, once their duties were over?

Were they themselves placed in quarantine after coming into close contact with patients in the line of duty, especially if they did so with no PPE?

Were they tested even once for the virus, especially before they were sent on leave?

Were they warned that they too could become infected and told to self-quarantine once back at home?

If no training was given, no gear was provided, no testing was done, who is ultimately responsible for these criminal mistakes?

Did the politicians, generals and admirals think that the deployed service personnel were safe from being infected? Or did they just not care? Was the navy cluster the result of monumental ignorance or of an attitude which venerates war-heroes in the abstract while treating flesh and blood soldiers and sailors as expendables – cannon-fodder in war turned virus-fodder in a pandemic?

The government wanted its campaign against the virus to be as non-transparent as its war against the LTTE. It also wanted a quick and a cheap victory, in time for the April 25th election. Had health workers been used, the government would have had to provide certain basic minimum facilities. If not, there would have been complaints and criticism. For example, on April 29th, the GMOA and the association of Public Health Inspectors (PHIs) revealed that PPE are available only for 10% of health workers.

The government hoped to evade transparency and accountability by using the military, until it backfired.

It is still not too late to learn from the few Covid-19 success stories (China, incidentally is not a success story; the world is facing a pandemic because the Chinese leaders played politics with the virus). Other than Vietnam, all other major success stories are functioning democracies (including the Indian state of Kerala). What they all have in common is a policy concoction consisting of massive testing, contact tracing and quarantining.

They were also fast on the mark; The CPIM-led Left Democratic Front state government of Kerala instituted lockdown measures when the Modi government was busy with Muslim-bashing. The fight back was led by medical professionals and public officials, helped by the police. Even Vietnam (probably the only country in the world with an army which humbled both a colonial power and a super power) used doctors, bureaucrats and massive testing (over 300,000 people have been tested so far).

The lesson is obvious – strongmen-leaders aren’t good at pandemic-fighting, perhaps because political power rather than national health is their true priority.

In late March, Hungarian parliament passed a law giving President Victor Orbán the right to rule by decree for an indefinite period and criminalising ‘intentionally spreading false rumours about coronavirus’ with a jail-term up to five years. The opposition offered to back the law, if a sunset clause was included. The government, which had the numbers, turned down the offer and made the law open ended.

Across developed and developing world, populist leaders from Donald Trump to Narendra Modi are trying to use the pandemic to gather more powers into their hands. The Rajapaksas too are part of this tribe. They too are trying to use the pandemic to buttress the dictatorial myth of One nation, One people, One leader. In Sri Lanka, though, there is a question: which leader? Is it President Gotabaya or Premier Mahinda?

The brothers might squabble over power, but when it comes to using the pandemic to gut basic rights and freedoms, they are in complete agreement. It is almost a month since attorney-at-law Hejaz Hisbullah was arrested. His lawyers have not been allowed to discuss the case with him. They have also been told to speak in Sinhala. The CID has reportedly taken for questioning even children who had benefited from a charity organisation in which Mr. Hisbullah was involved. The children were reportedly taken to undisclosed locations and questioned without the presence of a parent or a guardian. Mangala Samaraweera has revealed that so far 17 social media activists have been arrested on various charges. For example, the police had arrested two young men who wrote on the social media about the plight of a group of 15 upcountry Tamils stuck in Sri Venkateshwara Hindu Kovil with inadequate food and drinking water. The young men had been charged with breaking the curfew.

What is happening to Mr. Hisbullah today can happen tomorrow to any lawyer who incurs the government’s wrath. What is happening to social media commentators today can happen tomorrow to any print or electronic media journalist who criticises the government. When pity and compassion are banished, any citizen can be arrested for an act of common or garden decency or compassion.

The danger of holding an election in such an atmosphere is obvious. The government will not hesitate to arrest opposition activists and voters for violating this or that anti-virus rule while giving a free pass to its own supporters. But postponing the election repeatedly carries its own dangers. It will habituate the president into acting outside the constitution and strengthen those who are advocating Gotabaya rule. Vendaruwe Upali thero (of be a little like Hitler infame) wants parliamentary election to be postponed for 3 years. Athuraliye Ratana thero held a media briefing castigating Mahinda Rajapaksa and stating that people want only President Gotabaya.

The opposition must continue to support the government in beating back the pandemic while opening its collective mouth on the Rajapaksa practice of using the pandemic to gut democratic rights and freedoms. The path to a relatively free and fair election lies in anti-pandemic measures that are based on facts and science, and is transparent to the public and accountable to people.

According to a report in the Ravaya, the head of the PHI Association of Sri Lanka has complained that health officials are being kept in the dark about COVID-19 positives in Navy-run quarantine centres. Such lack of transparency hinders rather than helps contact tracing and quarantining. It is inconstant not just with democracy but also with the best practices of virus-fighting. These are the problems the opposition must raise, the causes it must champion. If the opposition fails to advocate of best practices and vulnerable sections, if it stays mute in the face of stupidity and injustice, the ultimate winner will be not even the Rajapaksas but the pandemic.