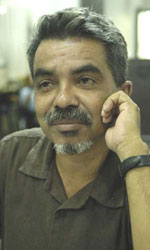 journalist who went missing since 2010 was fixed for argument for the third time
for August 23.

The petitioner is seeking the Court to direct the Police to produce Prageeth Ekneligoda who was allegedly kidnapped by unknown persons. The journalist had been receiving threatening telephone calls from unknown parties since he had supported Sarath Fonseka in his campaign in the Presidential Election. He had also openly commented critically on the political situation in the country.
The petitioners state that Ekneligoda had made several complaints to the Police regarding the threatening telephone calls on which no action has been taken so far.
The petitioners state that the journalist may be held unlawfully in custody with the knowledge of the 1st respondent. The petitioners said Ekneligoda was abducted while he was on his way home from Dambulla and was never seen since then.
The petitioners’ attorney Krishmal Warnakulasuriya with Aparajitha Ariyaratne said that though the petition was filed in February 2010 the respondents filed their objections only in January 2011.The case was taken up before Justice D.S.C. Lekamwasam and fixed for argument on August 23.