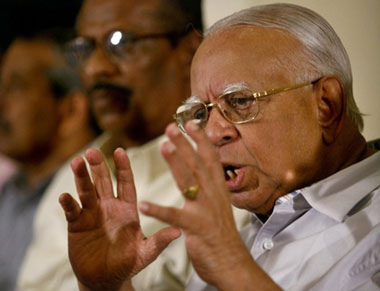 I thought I would say a few words on this debate. The people have delivered a verdict and, in a democracy, the people’s verdict must be respected. The Hon. Member who moved the Motion and the Hon. Member who seconded the Motion have referred to various matters. I think, Sir, I will primarily do a brief analysis of the result of the Local Authorities Election held on 10th of February.

The People’s Liberation Front – JVP – polled 6.26 per cent and the Illankai Tamil Arasu Kachchi polled 3.06 per cent. If one was to add the percentage of votes polled by those two parties together with the percentage of votes polled by the United National Party, the United People’s Freedom Alliance and the Sri Lanka Freedom Party, the total would be 55.31 per cent. So, in other words, parties opposed to the Sri Lanka Podujana Peramuna have polled 55.31 per cent and the Sri Lanka Podujana Peramuna has polled only 44.69 per cent. This is indisputable. [Interruption.]

I want to make a few comments, Mr. Speaker, if you permit me in regard to the nature of the propaganda that was carried on at this election. I do not want to do something controversial. But, I must refer to the fact that I was quite alarmed when, quite early in the campaign, former President Mahinda Rajapaksa, in the course of an election rally, said that sometimes this election would result in Tamil Eelam blooming after the election is over. The reason he gave was that there was a new Constitution being framed which might result in that happening. Sir, ever since the Thirteenth Amendment was enacted in 1987 – 1988, there had been continued efforts on the part of different Presidents and different Governments to improve the Thirteenth Amendment in such a manner as to bring about a political resolution acceptable to all the citizens in this country. During President Premadasa’s time, there was the Mangala Moonesinghe Parliamentary Select Committee Proposals which made recommendations which went far beyond the Thirteenth Amendment. During President Chandrika Bandaranaike Kumaratunga’s time, there were the 2000 Constitutional Proposals brought to Parliament by no less a person than Prof. G.L. Peiris which went far beyond the Thirteenth Amendment and contained various new features. That proposed Constitution had been brought as a Bill to Parliament.

Thereafter President Mahinda Rajapaksa assumed office. If he will recall his speech that he made at the initial meeting, the inaugural meeting of the All Party Representatives Committee (APRC) and the Experts Committee, he talked of maximum possible devolution. He appointed an Experts Committee that came up with the reports. There was the Prof. Tissa Vitharana Committee which came up with their own report which took the Constitutional proposals much beyond the Thirteenth Amendment and that was the position. After the assumption of office of this Parliament, this Parliament was evolved into a Constitutional Assembly to frame a new Constitution. As per a Resolution adopted unanimously in this Parliament with all the Joint Opposition Members being supportive of that Resolution, – none of you opposed it – there was a Steering Committee appointed. You participated in the proceedings of the Steering Committee. None of you opposed it. None of you talked of Eelam in this Parliament. None of you talked of Eelam at the Steering Committee. You accepted it; you went along with the process. Suddenly, Mr. Mahinda Rajapaksa says, “There Eelam is likely to bloom after the Local Authority Elections if the people are not careful.”

I have information, Sir, that this message was propagated amongst the innocent Sinhala people in this country. They were told, “This is a referendum for an Eelam. If you vote for the Government or if you vote for the UNP, it will result in an Eelam being created. So, do not vote for them. Vote for the ‘Lotus Bud’ ”. I am told, Sir, that particularly this propaganda was very virulently carried out in all the temples, in all the villages in the Sinhala South. This, I think, is unfortunate, Sir. I want to put on record that my Party at this Election, in our manifesto, talked of a political solution within the framework of an undivided, indivisible, single country.
There was no campaign carried on, anywhere, in the North and East which talked of division of the country. We only talked of a solution that is acceptable to our people, that is reasonable, with substantial power-sharing within the framework of a united, undivided, indivisible single country. That was the propaganda we carried out in all our areas and when we did that, how dare President Rajapaksa say that Eelam could bloom after the election. This is not merely deception of the people in the South, innocent Sinhala people in the South, but it is the deception of everyone including himself.

I would like to put this on record because I want everybody in this country to know that it was a malicious, vicious, fallacious, false propaganda on the part of President Mahinda Rajapaksa and the Sri Lanka Podujana Peramuna and if you proceed with this agenda, I want to tell you, Eelam will bloom, not on account of us, but on account of your “Lotus Bud”. Your “Lotus Bud” will bloom into an Eelam. That is what will happen. Therefore, please resist your temptation to achieve cheap political gain by carrying on such false propaganda.