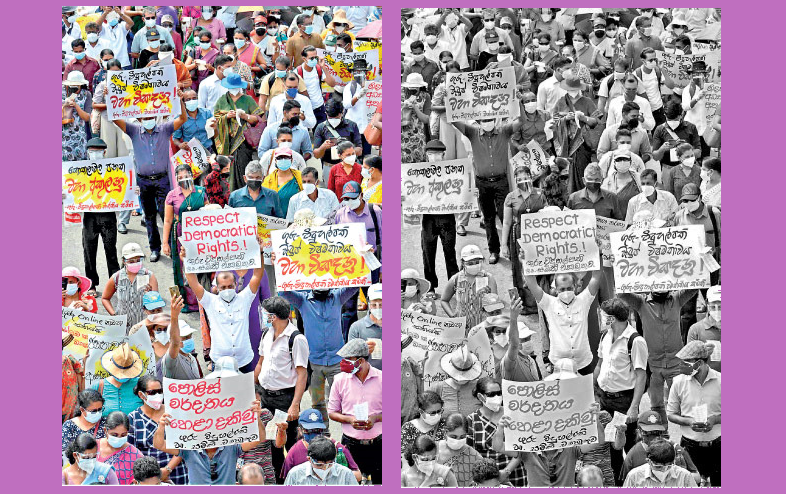 Image: Teachers’ struggle is turning out to be the most organised, justified and non-politically motivated protest seen in decades.( Photo by  Shehan Gunasekara)

Of all the pandemic-initiated crises, starting with public health and economic, the education crisis has been the one that’s often relegated in the list of priorities.

When all schools in about 192 countries abruptly shuttered in March 2020 ‘ousting’ nearly 1.6 billion students from education, it chalked a historic milestone in education, globally. Several countries immediately took action to facilitate online and internet-based education for students.

Most economically advantaged countries had a majority of students switching to online education seamlessly. Some less advantaged and low-income countries used the help of international agencies and swiftly took steps to enable internet and device access to students and teachers, in addition to providing pedagogical assistance.

Some countries used this historic opportunity to re-design curricula and teaching methodologies to suit the time. Such governments allocated funds for teacher-training and for equipping teachers to meet the post-pandemic education challenges. (https://en.unesco.org/news/global-education-coalition-explores-digital-learning-turn-africa, and https://theconversation.com/how-african-countries-can-reform-education-to-get-ahead-after-pandemic-school-closures-163935)

This is Sri Lanka

The entire student (4.3 million) and teacher (241,000) populations have been facing crisis after crisis since March 2020. With school closure, less than 10% of students had the ability to connect to real-time face-to-face education, online.

Internet accessibility, as per Census 2019 is only 34.11%, and as per a Computer Literacy survey, only 22.2% of households owned a laptop or PC. About 45% of students used parents’ smart phones to access notes sent by teachers using WhatsApp. A study done by LIRNEAsia last year describes these data. (www.lirneasia.net/afteraccess-COVID19). In summary, more than 50% of students had no access to any form of education, since the pandemic.

Since March 2020 teachers have been devoting time, energy and using their own meagre resources to provide some form of education to students. Some have borrowed or pawned personal valuables to buy feature phones. Some have used their own initiative to learn how to conduct classes via zoom, since the technology was new to them, and since no training was offered by the Ministry.

Despite all of this, teachers have not been recognised nor compensated for what they have been doing these past 17 months. They only continue to receive their meagre monthly salary of something between Rs. 30,000-Rs. 35,000. (In 2015 a graduate teacher received Rs. 16,500 and in 2019 it had been increased to Rs. 33,300. Trained teachers get much less).

In Sri Lanka teachers are the lowest paid group of public servants in all of Asia, and the group that will contribute the most, to creating a new generation of citizens who’d be ready to navigate post-pandemic challenges, economic or otherwise.

In terms of % GDP allocated for education, see where Sri Lanka resides:

For nearly 25 days teachers and principals are on the streets, risking escalating health hazards of the ongoing pandemic, and multiple threats to life. They are demanding that salary anomalies be rectified. This is turning out to be the most organised, justified and non-politically motivated protest seen in decades. The Government has been watching, almost arrogantly, with no sincere efforts to resolve this crisis.

Salaries & Cadre Commissions (SCC) have been in operation for decades. They could have offered solutions, but haven’t. If the excuse by the Government is delay by SCC, the latter could have sat for several hours a day since July, when the protests began, and resolved this issue by now.

If there was sincerity of purpose this could have been done.

If there is sincerity of purpose, here are some suggestions for paying this group of valuable public servants:

1. The Government last increased taxes on the liquor and tobacco industry in March 2019. That’s 30 months ago.  Excise taxes from liquor and tobacco alone account for Rs. 200 billion. A 10% increase in tax will yield Rs. 20 billion per annum.

2. Government tax-cuts in December 2019 resulted in tax revenue declining by Rs. 518 billion in 2020. Recouping even 10% of that by reversing some of those tax changes, that largely benefitted the upper echelons of society, can yield up to Rs. 50 billion

4. In the 2021 Budget the Government found a way to allocate an additional Rs. 20 billion for strengthening national security. A sector which already receives close to Rs. 250 billion per year for recurrent spending alone.

It’s glaringly obvious that it’s not a question of lack of resources. It’s simply a lack of willingness to allocate resources for what ought to be a priority. Again if there was sincerity of purpose they would raise revenue to fund such allocations.

This appeal is for the Government and the Minister to take initiative and ‘blink’ at this faceoff.  Be humble. Be gracious. Give the teachers their rightful due and prevent this crisis becoming a humanitarian catastrophe