Easy for western countries to talk, to criticise us: Mahinda Rajapaksa 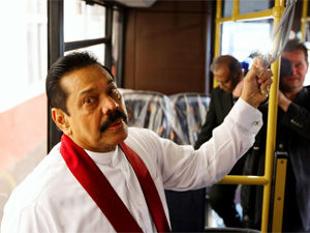 PTI
BEIJING: Dismissing allegations of poor human rights situation in Sri Lanka, President Mahinda Rajapaksa has said a stable and powerful government is essential for the country’s development and the western countries criticised him without “clear understanding”.

“The development of a country requires a stable government. A stable government is a powerful support to a country. A powerful government with full support by the people is the most important factor for us to push forward,” he said in an interview to China’s state television CCTV. “It’s easy for the western countries to talk, to criticise. I’m sorry to say that the western countries criticise us without having a clear understanding,” he said about persistent criticism about the human rights record in the country even after the end of the 26-year-long ethnic conflict in 2009 with the defeat of the LTTE.

Defending deepening ties between China and Sri Lanka, Rajapaksa said the friendship between the two countries goes back a long way.

“Bilateral relations have extended to educational, social, cultural and all kinds of aspects. Thus, a high level of strategic cooperative partnership has been formed,” he said.

“What I want especially to say is about Sri Lanka’s infrastructure construction. For the port construction, we want a free port. As for the tourism, we need a lot of Chinese investment. And we are satisfied with the investment from China so far,” he said.

Elaborating on increasing heavy Chinese investments in the island nation, China’s Ambassador to Sri Lanka Wu Jianghao said Beijing followed a three-pronged plan to deepen its ties with Colombo which included, infrastructure development, support to key industries and finally, to help Lanka to “advance towards the world”.

He did not, however, explain what helping Lanka to advance towards world meant.

Wu said the two countries signed agreements on a three- stage economic cooperation plan in May this year which will boost economic and trade cooperation.

At present, China is investing heavily in Sri Lanka, helping the country to develop its ports infrastructure as well as that of road and rail network.

During the visit of Rajapaksa here this May, China offered USD 2. 2 billion worth of new loans and the two countries agreed on USD 1.5 billion investment of private sector in the northern express highway linking Kandy in the central part of Sri Lanka to Jaffna in the north, according to Sri Lankan Foreign Minister, G L Peiris.