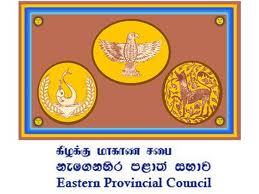 The Eastern Provincial Council yesterday passed a  resolution during its sessions last afternoon, calling for the full implementation of the 13th amendment.
The resolution wants all powers entitled to the Councils by the 13th Amendment to be granted and rejected proposals to dilute the 13A as attempted by the Government a few months ago.
The resolution was debated and passed in the Council despite massive resistance from the Eastern Province Chief Minister Najeeb A Majeed. The resolution was presented by the Sri Lanka Muslim Congress whose seven members in the 37 seat EPC usually supports the UPFA.
The TNA and UNP supported the resolution while many of the UPFA councillors were not present. However, without the SLMC support, the UPFA would still not have a majority in the EPC to defeat such a resolution. The resolution passed with a majority of 16 to 1.
The Chief Minister of the Eastern Province walked out of the chamber when the SLMC and Opposition members insisted on the resolution being debated. The only Councillor to vote against the resolution was Priyantha Pathirana of the NFF led by Wimal Weerawansa.
With the resolution passed yesterday, the EPC becomes the only Provincial Council to oppose the central Government’s proposals to revise the 13A and dilute the powers of the councils. Seven other councils have approved the Government’s plans. The Northern Provincial Council which was recently elected is also likely to vote overwhelmingly against changes to the 13A.
The Government initially hoped to bring revisions to the amendment and slash the powers of the councils ahead of the Northern provincial election although the attempts failed after New Delhi exerted pressure on Colombo.
Meanwhile the Sri Lanka Muslim Congress (SLMC) has warned that it would withdraw its support to the current administration of the Eastern Provincial Council (EPC) if it drags on without finding satisfactory solution to the land problems faced by the Muslim community in Pulmoddai in the Trincomalee District. The leader of the SLMC in the EPC, A.M. Jameel, issued the warning at the monthly meeting of the EPC held on Monday.
EPC councilor, M.R. Anwer, of the SLMC brought an urgent motion in regard to the land appropriation now taking place in Pulmoddai, a traditional Muslim village, that is impacting on the Muslim community. Seconding the motion, Councillor, Jameel, who is the SLMC group leader said, lands belonging to Tamils and Muslims are being appropriated in the Eastern Province but the EPC is unable to stop such appropriation effectively. If the PC administration fails to take prompt action against such appropriation of lands, the SLMC would be forced to withdraw the support it extends to the current administration of the EPC. During the past one year rule of the current EPC administration, no meaningful steps had been taken is taken to safeguard the rights of the people
He wanted the EPC administration to take immediate, meaningful steps to solve the Pulmoddai land problems. “The Chief Minister should exercise his powers to settle land problems faced by the Muslim community.
SLMC Group Leader, A.M. Jameel, hailed the outstanding victory of the Tamil National Alliance in the Northern Provincial council election held last month, and congratulated the Chief Minister, C.V. Wigneswaran on behalf of the Sri Lanka Muslim Congress
Eye SL
Share
Facebook
Twitter
WhatsApp
Pinterest
Email