Eastern Musling were “beaten and humiliated” by Sri Lanka Military 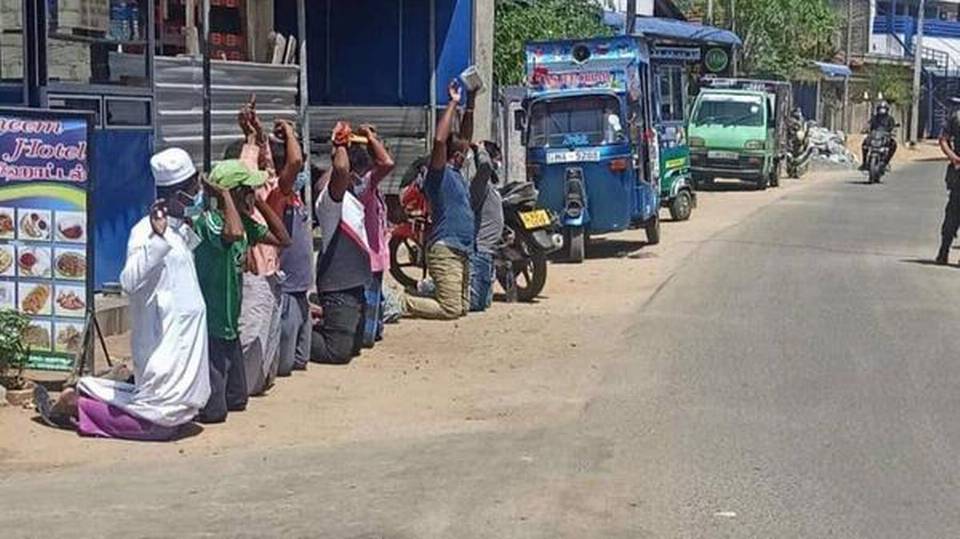 Image: Out of the blue: Muslim residents kneeling on the streets as a ‘punishment’ for flouting lockdown rules.

Sri Lanka to probe ‘army attack and humiliation’ of Muslims.

(The Hindu) A widely-shared image on social media, showing a row of men kneeling in front of soldiers for reportedly violating Sri Lanka’s current lockdown, has prompted the Army to probe the incident.

Issuing a media statement on Sunday, the Army said “it immediately removed” the personnel from their duties, “after an alleged improper conduct of a few army personnel” in Eravur, a Muslim-majority town in the eastern Batticaloa district. Initial investigation has begun, the army said, pledging “strictest action”.

The incident on Saturday — which came to light after the photograph of kneeling men went viral online — has heightened fears in Eravur, locals said. It also comes at a time when there is growing domestic and international — including UN — concern over “targeted attacks” on Sri Lanka’s Muslims, who constitute about 10% of the country’s nearly 22 million population.

Out of the blue

Forty-four-year-old daily wage earner Mohammed Ismail Marzook of Eravur was already going through a rough patch, with his income shrinking during the pandemic, whose third wave the country is experiencing. The last thing he expected was to be “beaten and humiliated”.

“I just went on my bicycle to buy my diabetes medicines at our local pharmacy, and a little bit of rice nearby. I even showed the empty box of my pills, but the soldiers forced me to kneel down right there along with some others, with my hands raised,” he told The Hindu. “I explained to them in Sinhala that I am a patient, and that I stepped out only to buy medicines, which is allowed. But they wouldn’t listen, and kept beating me, like they would cattle,” he said.

Batticaloa MP Shanakiyan Rasamanickam, who put out a tweet juxtaposing a photograph of a vehicle pile-up on a Colombo road during the current lockdown, and the photograph from Eravur, said the incident showed yet again that it is “one country two laws for this government.”

Responding to the army’s statement that they would probe the incident, the legislator told The Hindu that the army was “forced to acknowledge” the incident and investigate it, since the image had gone viral on social media. “If they can investigate this matter now, why can’t they do the same in regard to the Tamils’ long-pending concerns about alleged crimes against humanity by the army at the end of the war? Do they mean to say not even one army member could have committed any wrong?” he asked.