Easter Sunday attacks:Those responsible for this – from the very top – must at the very least resign. – Sumanthiran 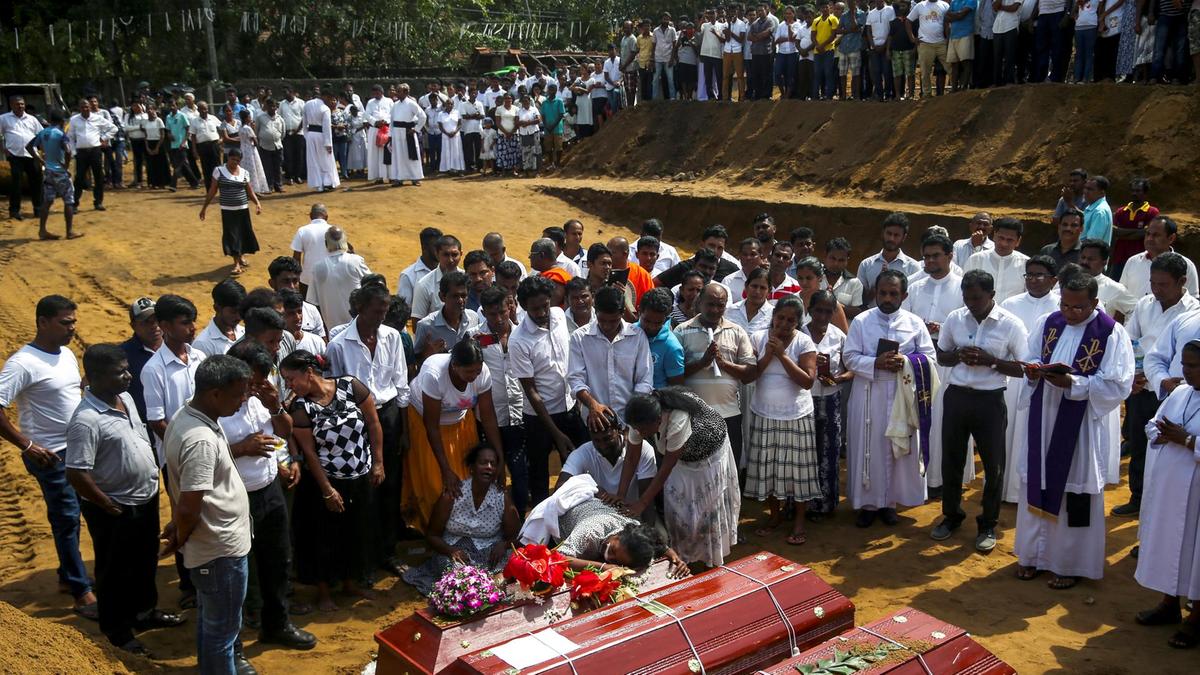 Image: Mourners attend a mass burial, two days after a series of suicide bomb attacks on churches and luxury hotels across Sri Lanka on Easter Sunday, at a cemetery near St Sebastian Church in Negombo, April 23, 2019. Reuters.
(Speech made by Hon A. Sumanthirn in Parliament today, 24. April 2019.)
I rise with a heavy heart to say a few words at this time. Firstly, I wish to convey our deepest condolences to all the relatives and friends of those who were killed on Easter Sunday and we also pray for speedy recovery of those who were injured.

I am a Christian and I share in the sorrow of the Christian church in Sri Lanka at this time. We believe in Jesus Christ, who came into this world, suffered as we do and took the worst of evil onto himself and was crucified unjustly. But he defeated all evil through self-sacrificial love, which is what we celebrate on Easter – Resurrection day. We are grieving – but yet we will not allow hate and revenge to overtake us. I can only quote Rev Fr Jude Fernando, who was celebrating the Easter Mass at Kochchikade St Anthony’s Church when the explosion took place. I quote:

“We love peace. We forgive. Our God is a God of peace, he is not a God of revenge. We love each other, we forgive.”

This does not mean that those who are responsible for this carnage can go scot free. It does however, mean that we do not respond to perpetrators, who acted out of hate, with hatred ourselves. The objective should not be revenge, but seeking truth, accountability and justice. It is the duty of the State to vigorously pursue them and bring them to justice in accordance with the law. Very serious questions have arisen as to the why preventive action was not taken when information was available. Those responsible for this – from the very top – must at the very least resign. I raised the issue of the President keeping the Police Department under his charge, during the Budget debate. This is clearly unconstitutional. The Police came under a separate Ministry called Law and Order when the 19th Amendment was passed. The Constitution identifies only three subjects that the President can hold: Defence, Mahaweli and Environment. Law and Order is NOT one of those. By unlawfully holding on to this portfolio, the President has now become the first person who should take responsibility for these attacks that could have been prevented.

I attended the funerals of some of the victims in Batticaloa on Monday. Our party called for a day mourning – not a hartal – to be observed in the North and East today. I visited the Catholic Bishop of Batticaloa and the Governor of the Eastern Province and conveyed this message. Unfortunately, the Governor has stated that it was a hartal that was called for. This is despite very clearly saying that it is NOT a hartal. There are many serious questions that are being asked about the Governor and his connections to National Thowheed Jamaath. This must be investigated. So must all connections this group has had with various other politicians and previous defence officials be investigated. The Muslim people, to their credit, have repeatedly complained about these miscreants. Years ago, Muslim groups raised the issue of radicalization with government intelligence officials, and appealed that steps be taken to halt this process. Further, in 2017 itself they even held a demonstration in Kattankudy and asked that Zaharan be arrested. I must, in this respect, commend the brave conduct of Hon. Kabir Hashim, who has set a great example for all of us.

Finally, I appeal to all – politicians in particular – not to blame this tragedy on any particular community. The Muslims of this country have never reacted with violence even when violence was thrust upon them. We value that very much and we will march towards a better tomorrow for all of us – Sinhalese, Tamils, Muslims and others – hand in hand.