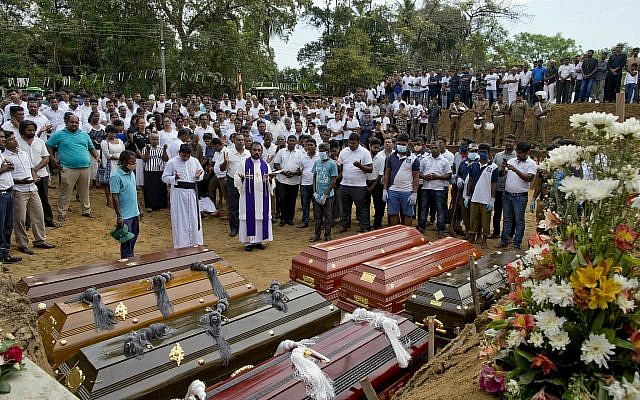 The Supreme Court today ordered former President Maithripala Sirisena to pay a sum of Rs.100 million as damages to the victims of Easter Sunday attacks.

The Court held these respondents have violated the fundamental rights of petitions filed in connection with Easter Sunday attacks. (DM)

From the verdict given by the Supreme Court.

Based on these indicia the State should pay fair compensation for the pain, agony, distress,
suffering and destruction undergone by the victims and families as a result of the contraventions by the Respondents we have identified. We direct the State to pay Rs 1 million as such compensation to the Victim Fund we have already ordered to be established at the Office for Reparation. This sum would be in addition to the compensation that the State had decided to pay by way of its cabinet decision, on which we have called for a report through the Attorney General.

Before we proceed to summarize the compensation payable and part with the judgment, we must express our shock and dismay at the deplorable want of oversight and inaction that we have seen in the conduct of affairs pertaining to Security, Law and Order and Intelligence. There are glaring examples of a lack of strategic co-ordination, expertise and preparedness that need a critical examination as to the way forward. The failures that eventuated in the Easter Sunday attacks and the concomitant deaths and devastations have left behind an indelible blot on the security apparatus of the Country and this Country which is blessed by a multi-cultural and multi religious polity cannot be left to the vagaries of these follies and made to suffer leading to violence, fear, apprehension and uncertainty. These events must recede into oblivion but they remind us starkly of the necessity to effect legislative, structural and administrative changes.

It is evident from the evidence placed before us that there is an urgent need to place the National Security Council (NSC) on a statutory footing and its composition specified with clarity so that there are no maneuvers to manipulate hostile exclusions and selective inclusions. The affidavit testimonies and the large volume of documents we have perused highlight the necessity to revamp the security systems and intelligence structures so that the expanding threats of terrorism and emerging challenges could be nipped in the bud and arrested as this Country cannot descend into anarchy once more. The course of conduct we have scrutinized demonstrates a woeful lack of expertise in intelligence gathering and dissemination among important individuals entrusted with the task. For instance, the office of Director, SIS and CNI must be occupied by individuals with necessary skill and expertise and the conduct of the Respondents who held the office, upon receiving sensitive intelligence, shows a lack of awareness and understanding of strategic vision.

We recommend that the duties and functions of the office of Chief of National Intelligence (CNI) must be stipulated with definite certainty and the office should be occupied by a person having the necessary expertise, training and qualification.

We now turn to crystallize the orders we would make in addition to the orders, recommendations and directions we have indicated above.

We wish to place our appreciation of all learned counsel both from the official and unofficial bar for the exemplary manner in which they presented their cases consistent with the highest traditions of the Bar.

Read the full verdict of the SC:Easter Attacks FR – Judgement