Easter Sunday atrocities have shaken the entire Sri-Lankan society and this should never happen again. 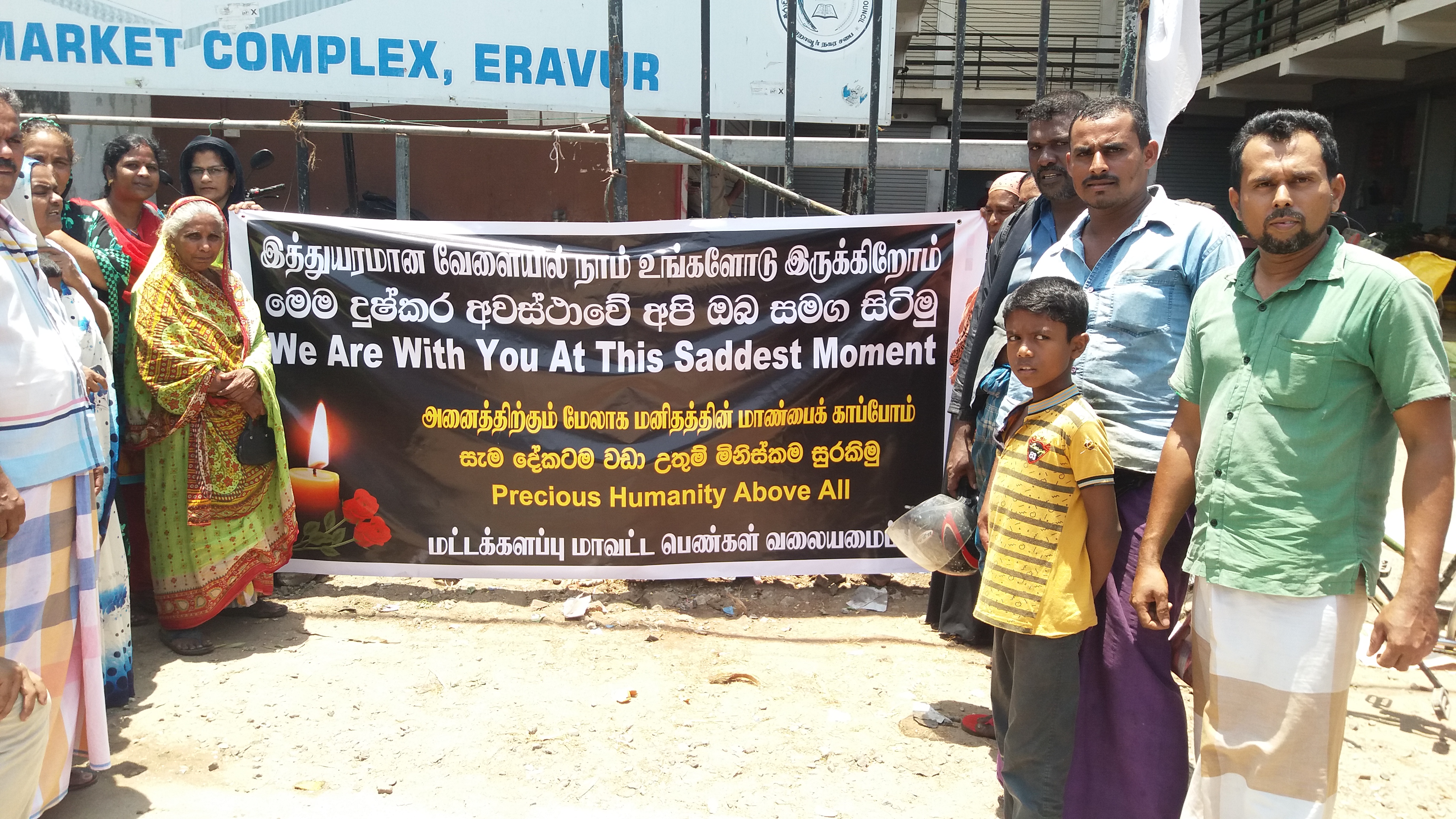 Civil society organizations and women’s organizations of North and East Sri-Lanka jointly expressed their condolences and solidarity to the families and friends of the victims of Easter Sunday. Banners were put up and memorials were took place in several locations including Mannar, Jaffna, Mullaitivu, Trincomalee,  Eravur, Kaathankudy and Kalmunai. Their message is to “Precious Humanity Above All” beyond religious differences. Muslim men and women also participated in the memorials. A Muslim man in Mannar thanked the organizers for giving them also an opportunity to mourn. Mr. Yardson Figurado, Coordinator of Mannar Social Economic and Development Organization – a grass root human rights organization which is working with Tamils and Muslims of Mannar for their land and fisher rights – sated, religion is a personal belief which gives internal peace and console, but as members of human society people have more duties and responsibilities towards each other. He further stated, that impoverished people could gain “at least a grain” only by their solidarity to each other.

From recent past violent attacks and hate crimes  have been taken place against minority religious communities. On the other hand  hate crimes took place between minority religious communities too. The Easter Sunday incident which is a barbaric act sabotaged the confidence and remained solidarity of Sri-Lankans. Fear, suspicion and hate spread in the mainstream life.

In the East Muslim women of  Eravur and Kathankudy joined along with their Tamil sisters in the mourning. Muslim men also willfully joined with them. Some Muslim women asked “sorry” from the Tamil women as this saddest plight happened to Batticaloa Tamil Christians under the name of Islam. They openly expressed that their Tamil sisters  should not misunderstand them and their communities for these brutalities. It was noticed that the innocent Muslim people are left with a guilty feeling. Muslim women and men openly cursed the terrorists.  They all said, on that Easter day their entire communities were in shock and in grieve when hearing and watching the news.  It was observed that the Muslim community  in East and especially the women of Eastern Muslim community carry the burden of fear for their future.

A middle aged Muslim woman who is a seller at the Eravur market said with tears,  that the entire Sri-Lankan society is looking at the Muslim community as a “betrayed community” and the media is spreading several unrealistic stories which creates fear among them. Some Muslim women in Eravur are collecting relief items for the affected families in Batticaloa.

Muslim women and men in Eravur who joined in the memorial openly stated that the Easter Sunday atrocities have made the Muslims to be in a closed situation and they have thought that they would going to be in the closed and isolated situation from the rest of their life. The visit of Tamil women to their village made them to come out of their closed situation. It was observed that the innocent and voiceless people of North and East Muslim communities are emotionally weakened and have expectations to integrate with Tamil and Sinhala communities.

Each community of Sri-Lanka – Sinhala, Tamil and Muslim – should act as a “protection and solidarity web” of their fellow sistren/brethren  communities. This is the only way to prevail the secured and peaceful human life in Sri-Lanka. Civil societies have more responsibilities on this regard.

The Easter Sunday atrocities have shaken the entire Sri-Lankan society and this should not happen never in our Sri-Lankan soil. “NO IMPUNITY” to those who are responsible  for these inhuman deed.