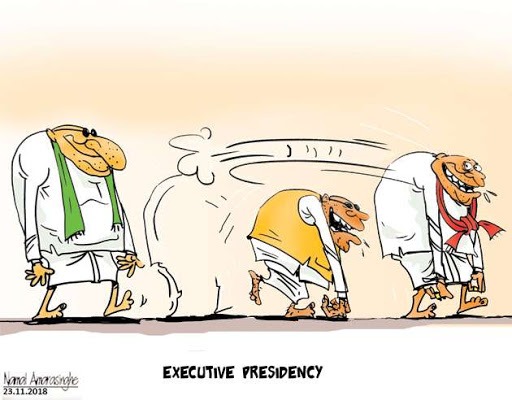 Sri Lanka is now in a terrible and unfortunate situation. It lies in the bottom of the pit of failure. In other words, the entire system of the country (socio-political and economic) is in a state of breakdown, collapse and virtual failure.

The state of the country

The social system of the country lies in a state of disorder and fragmentation. The political system, the state, and its institutional system are in a serious state of collapse, and afflicted with rampant corruption and degeneration. The economy of the country is also on the verge of bankruptcy.

The number of those who have lost their jobs is extremely high though the extent of it has not been calculated. The income of those who are employed has gone down drastically. The cost of living is unbearably high and it has been rapidly racing up. At the same time the exchange rate of the Dollar is also rising. Now it has reached the mark of Rs. 206.

According to the Minister of Finance, it could even rise up to Rs 350 in the near future. Importation of a considerable number of goods has been stopped and most of the imported goods could be purchased only as long as the stocks are available in the market.

As a country, Sri Lanka has now reached a stage where it should adopt structural reforms with public consensus and without delay, and recreate the state and the socio political system to overcome the crisis facing the country. Failure to do so might result in exacerbating and solidifying the failure of the State. In such an eventuality, inevitably the country will have to pay a heavy price for negligence.

Waiting for the crisis to resolve by itself

But neither the government nor the opposition seems to have realized that this crisis is one that needs to be overcome by a structural reform program adopted through national consensus. Even the intelligentsia of the country does not seem to have understood this situation. Apparently, all of them are waiting for the crisis to resolve by itself. The level of stupidity or intellectual degeneration of the country at this historic moment can be discerned from this situation.

The presidential model of governance operated in Sri Lanka is different from the corresponding classical model operative in the USA. It can be described as a Lumpan model exclusive to Sri Lanka. Under this system, all the powers of the State are vested in the President. He is above the law and is not bound to be responsible to the judiciary, the parliament or any other institution. He is the custodian of the public property of the country. Surprisingly, the presidency of Sri Lanka has been designed without having proper checks and balances in place to ensure that the public property in the custody of the president would not be misused. Under the circumstances, the Presidents of Sri Lanka are endowed with the ability to abuse public property in their custody. This situation has led to large-scale looting of public property by the presidents who rule the country.

Sapping the essence of the country

​All presidents from JR Jayewardene, the founder of this corrupt system, who had come to power up to date , have not only abused the public property in their custody by themselves , but also have allowed their friends and cronies to enjoy them. If the colossal damage caused to the country through this process by the presidents who ruled the country, certainly, it will have to be counted in thousands of billions.

Abuse of public property by Presidents, which were under their custody, cannot be considered a secret not known to others. But for whatever reason no one has spoken about it openly. Even the political critics have not written anything about it. None of the proposals submitted by the public for amending the constitution has dealt with this crucial issue. All these things seem to have taken place on the implicit belief that the right the president has to plunder the public property in his temporary custody is a prerogative that should be protected.

According to the presidential system operative in Sri Lanka, the ruling party is invariably obliged to defend the President when he/she is involved in the abuse of public property as much as they safeguard him in other mistakes committed by the president.

In return, the President maintains a policy of protecting the members who support him when they are engaged in the exploitation of public property which comes under their jurisdiction. By virtue of this system established in the country, the political party or the alliance which seizes the presidential power, acquires the right to loot the public property in addition to the right to rule the country. Those of the opposition must wait patiently until they themselves get the opportunity.

It need not be stressed that the presidential model of Sri Lanka is a major cause of great degeneration and destruction of the country. It is a fact that those aspiring to contest the next presidential election should be aware of. Were they aware of the plundering of public property by presidents themselves when they were under their temporary custody? Has anyone of them ever criticized this obnoxious practice? If not why? Was it because they have implicitly approved and condoned this exploitative policy? Or else were they really unaware of it?

Why do they keep on dreaming of running for the next presidential election instead of launching a practical program to end this corrupt system of plunder at a time when the whole system has collapsed? Is it because of the desire to amass wealth on a large scale by undue means? If not, is it to rescue Sri Lanka from its present plight? How do they expect to bear the huge cost of the presidential election?

In 2015 the cost involved in the presidential campaign had been Rs 3 billion or 3000 million. How do they expect to pay back such a huge amount of money?