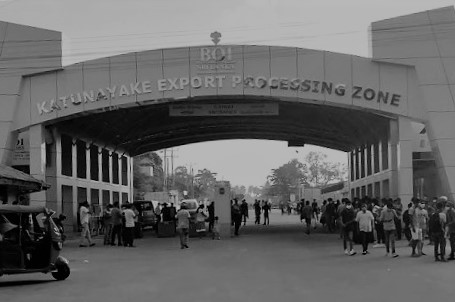 Twenty-eight-year-old Kasuni is among hundreds of garment workers hustled off unprepared to quarantine centres from their boarding houses.

“Most of us are still in a state of shock and disbelief over how we were dragged away to these quarantine centres like criminals,” she said.

“We were taken by army personnel. There was no Public Health Inspector or grama sevaka even. There was no female officer. They arrived at night and shouted at us saying we will be given 10 minutes to get ready.

“Some girls cried and some fainted.

Fever checks being carried out at a factory in Katunayake

“If this were a group of university students they would fight over their rights being violated but most of us are scared and we followed orders,” she said.

Like most of the garment workers in the areas of Awariwatte, Katunayake and Seeduwa, Negombo who were taken away from their lodgings, Kasuni did not know where her quarantine centre was located.

“As the news had spread that there would be a curfew, most of us purchased dry rations for about two to three weeks and kept them in our boarding houses. If we had been told to self-quarantine we could have done that.

“Instead, we were put in crowded buses, travelled for hours and are now staying in a centre worse than the boarding houses,” she said.

She said that despite having arrived several days ago at the centre set up at the Kalutara National College of Education for quarantining, they had still not undergone PCR tests nor even been seen by a Public Health Inspector (PHI).

“The toilet facilities are very poor here,” Kasuni said. “There are water cuts. There are about 400 garment factory workers and manpower workers, some with their families. There are small infants and pregnant women.

“At the very least our factory owners should be given the responsibility of quarantining us, with inspections by local health authorities,” she said.

Trade unions and organisations representing garment workers decried the quarantine arrangements and urged authorities to take a serious look at the plight of garment workers.

“There are instances where these girls were treated as criminals and not given a reason or told where they were being taken. They were taken in buses to quarantine centres without the presence of a Public Health Inspector (PHI) or a grama sevaka. When we ask the PHIs in the area, they say they have no clue as quarantining is done by the army,” he said.

Mr. Marcus said the union had requested the Prime Minister to instruct all factories that come under the Board of Investment to conduct PCR tests on workers and, if there were COVID-positive cases found, to immediately contact the area Medical Officer of Health.

“Taking garment girls to quarantine centres should be done in daytime with both the grama sevaka and Public Health Inspectors present,” the union leader said. “Details of those being taken for quarantine need to be with local health authorities and the grama sevaka.”

The union has asked the Minister of Labour, Nimal Siripala de Silva, to make sure that all Free Trade Zone entities in Biyagama, Awissawella, Horana, Wathupitiwala identify quarantine centres and PCR test facilities and establish health committees in all garment factories. FTZ owners have also been asked to increase random PCR testing and create awareness among boarding house owners about safety and hygiene measures.

Ashila Dandeniya of the Standup Movement said the garment workers felt they were portrayed as criminals when they were taken into quarantine.

“These workers were told to come near a school in Amandoluwa church for PCR testing. After hundreds gathered and waited for a long time, it was announced that PCR was being conducted only on those working in two factories. When workers were taken into quarantine they were given only a few minutes to pack for 15 days. There were families with children under the age of three among them,” Ms. Dandeniya said.

“They are the backbone of our economy. While senior officers of the factories are being quarantined in star-class hotels these girls, who work day and night, are dragged to dust-filled, badly-maintained hostels,” she said. Chandra Devanarayana of the Existence for Human Development (RED) said the Kalutara quarantine centre, where most garment workers staying in boarding houses were taken to, lacked adequate water and toilet facilities.

A writ petition has been filed before the Court of Appeal requesting the Health Ministry to ensure better quarantine facilities for garment workers and the general public.
Sunday Times