Dr Rajesh Venugopal issue: Is there a different visa to visit North and East? 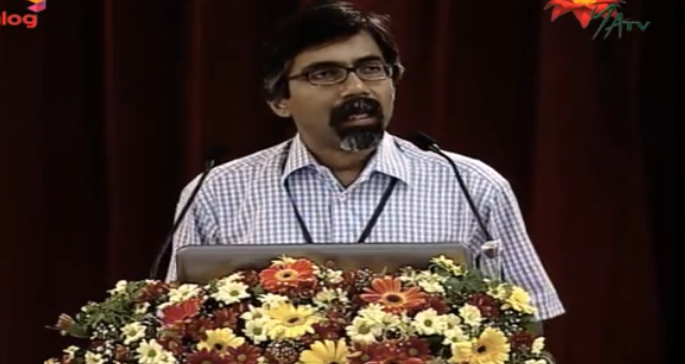 [Dr Rajesh Venugopal speaking at the CEPA confernece today]
A lecturer at the London School of Economics, Dr Rajesh Venugopal, who arrived in Sri Lanka on 28th August to attend a conference of Centre for Poverty Analysis (CEPA) ,was detained at the Air Port Lanka News Web reported: ”Dr. Rajesh Vinugopal, senior lecturer at the international development and human welfare unit of London School of Economics, was arrested by the Terrorism Investigation Division officials as he was about to enter Sri Lanka via Katunayake Airport around 11.35 on August 28. No reason was given for his arrest, and TID officials had continued to question him till around 7.00pm that evening.”

On 31st August BBC Sinhala service reported that Dr Rajesh Venugopal was questioned by the immigration officers over his visit to Batticaloa. According to Government police spokesperson Ajith Rohana he did not have a visa to visit Batticaclo and talk to people there.

Tamil Guardian reported that Dr. Rajesh Venugopal has visited Batticaloa ahead of the conference, where police allege he enquired about the military presence and military reprisals.

“According to his visa, he does not have permission for this,” police spokesperson Ajith Rohana told the BBC’s Tamil and Sinhala service, reports Tamil Gaurdian.

This statement of the police spokesperson implies that one needs to have a different visa to visit north and east and to talk to people there.

Sri Lanka Brief understands that Dr. Rajesh Venugopal has sent a e mail to some media institutions denying their reports related to him. But police spokesperson has confirmed that he was detained briefly and questioned.