‘Double talk’ of President Sirisena, a betrayal of the Muslim IDPs 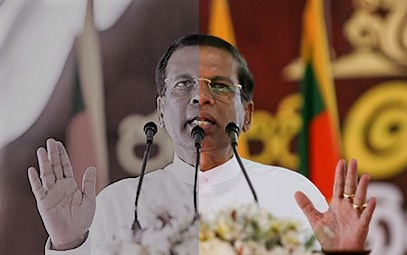 President Maithripala Sirisena says that the Muslim IDPs have encroached and destroyed land belonging to the Wilpattu National Park (June 2015).

President Sirisena orders the expansion of the forest reserve by taking over the land allocated to the Muslim IDPs of Musali South, Mannar (December 2016)

A minority of Buddhists and certain media organisations along with a few environmentalists have succeeded in the second ethnic cleansing of the Northern Muslims through the current Presidential order.

President Maithripala Sirisena in June 2015 claimed that the Muslims had encroached and cleared large tracts of land belonging to the Wilpattu National Park. He said he witnessed this when he took a helicopter tour of the Wilpattu and Musali areas in the Mannar District.

Buddhist extremists led by certain monks and supported by some media institutions have been on a concerted effort to deprive the right of return of the Muslim Internally Displaced Persons (IDPs) from the time land was allocated to them by the former regime of Mahinda Rajapaksa. They are also supported by some Environmentalists who are not sensitive to the rights of Muslim citizens of this country.

The Liberation Tigers of Tamil Eelam forcibly evicted the Muslims of the Northern Province in 1990 in the worst ethnic cleansing ever, in the history of Sri Lanka. The unfortunate Muslims were given two hours’ notice to leave their homes in certain areas and the others were forced out with less than 24 hours’ notice. They were not allowed to take with them any valuables or documents. 100,000 Muslims were thus expelled, and they trekked to the south and were forced to live as refugees in different parts of the country during the next 25 years.

With the end of the war in 2009, the Government undertook the resettlement of 300,000 Tamils who were displaced by the 30-year war. The Muslims, who were expelled by the LTTE in 1990, were not resettled along with the Tamil IDPs.

The Government had the policy of ‘last in first out’, where the Northern Task Force headed by presidential sibling and strongman Basil Rajapaksa undertook the huge task to resettle 300,000 refugees within a short period of 180 days. An impressive feat indeed by any standard and probably unmatched anywhere in the world. Yet, the Muslim IDPs from the 1990 eviction continued as a “forgotten people” until 2013.

Rishad Bathiudeen, the then Minister of Resettlement, could not resettle a single Muslim IDP of the 1990 eviction during the period 2009 to 2013. He too is an IDP who was forced to live in IDP camps in Puttalam when the LTTE evicted them in 1990.

It is unfortunate that the present President, who was elected by almost 98% of the Muslims and voting him to office, is betraying the IDPs of this community. Close to a million Muslim voters probably cast their vote for him. The map shows the voting pattern for Mahinda Rajapaksa and Maithripala Sirisena in January 2015. Today, Buddhist extremists have misled him to target the Muslim community through various acts of racism.

Former President Mahinda Rajapaksa supported the Bodu Bala Sena from behind the scenes. President Sirisena supports them openly; giving them the same prominence as the most respected Mahanayakes and other religious leaders.

Why are Muslim IDPs being targeted?

Why do the Government, media, Buddhist extremists and some environmentalists target the Muslim IDPs? Is this how an elected President governs a democracy where all citizens have equal rights? To use his own words, he may not be among the living if he had lost the presidential elections in January 2015. Then does he not owe his life to the Muslims? Why is he conniving with extremists to take the life of the innocent IDPs of the Northern Province?

The Northern IDP resettlement has been a controversial issue since 2009. The Government and international agencies prioritised the resettlement of the Tamils. During the same period, unknown to many, 2,860 families were brought from Suriyawewa and Hambantota in the Southern Province and settled in the most recent colonisation programme. They were provided over 5,000 acres of virgin forest land, infrastructure including schools and hospitals were built, grants provided for their settlement, etc.

While these environmentalists, Buddhist extremists and the President are protesting against the Muslim IDPs returning to their own lands for which they have title deeds dating back to over 100 years and permits given by the Government, there has been organised colonisation along the Wilpattu Reserve on the Welioya road by Sinhalese from Hambantota, Suriyawewa and families of armed forces personnel. The following are the available statistics for the Sinhala settlements:

None of these settlers are from the area. These 2,860 families settled in the Wilpattu area have been provided with three acres of land for each family compared to half an acre for each Muslim family in the lands they lived before the forced eviction.

Where did the land for these new settlers come from? Large extents of virgin jungle and reservations had been cleared and handed over for the alien settlements, grants and allowances disbursed, and all other facilities including schooling have been provided by the State. Neither land kachcheris were held nor deforestation undertaken with proper approvals. It is also alleged that the Army built the houses for these new settlers from Hambantota and elsewhere. Further, over 500 acres of land have been taken over by the Navy for cashew plantation.

Where will these IDPs go?

Basil Rajapaksa, as the Head of the Task Force for Northern Resettlement, started partial resettlement of the Muslim IDPs in 2013. Approximately 5,000 families of the 25,000 IDP families were allowed to return to their own lands, or allocated land by the Divisional Secretariat of Musali in the Mannar District.

The Muslims have title deeds dating back to 1906 and issued under the seal of King Edward. The President›s latest tryst with the racists will deprive these IDPs of resettling in their former homes. Where will these IDPs go?

They have gone and cleared land that they lived in before their displacement in 1990. During their displacement of over 25 years, there has been jungle growth and these people have cleared those shrubs. This is shown by media using drone cameras (filmed from 200 to 300 meters above ground) as jungles being cleared by the Muslim IDPs. These journalists know the truth, but they dance to the tune of their racist employers and extremist handlers.

The Government in 2012 declared most of the land as forestland just prior to the Provincial Council Elections for the Northern Province. They undertook this fearing that these lands will come under the jurisdiction of the Northern Provincial Council and that they will have the right to these lands if they didn›t belong to the Central Government, as all forest reserves come under the Central Government. It is alleged that even the Divisional Secretaries of these areas were not aware of this mapping until it was gazetted. This Cabinet decision has not been ratified by the Parliament; hence experts say it is not legally valid.

Environmental concerns have been cited for the current exercise of depriving the Muslim IDPs of their land. However, the Government has agreed to provide 15,000 acres to China to develop in Hambantota. Will they not cut down virgin forestland if the land is uninhabited as the Government claims? How many acres did the Government clear for the Suriyawewa Cricket Stadium and Mattala Airport projects?

If development takes place for a country›s citizens, then shouldn›t all its citizens be treated justly and equally first? Don›t all citizens have a right to return to their home? It is not to say that environmental concerns should be ignored; the environment certainly has to be protected. But courting environment to mete injustice to a segment of Sri Lanka›s citizens is deplorable.

The Muslims voted Sirisena not because they trusted him, but were convinced that an UNP Government under Ranil Wickremesinghe›s premiership would not be racist. Today, they have been proved wrong and it is up to the Prime Minister to convince President Sirisena that he is courting disaster with his ultra-racist policies. Failure would mean another 20 years in opposition for the United National Party. The winner would be the JVP because it is unlikely that the Muslims will ever trust the Rajapaksa clan.