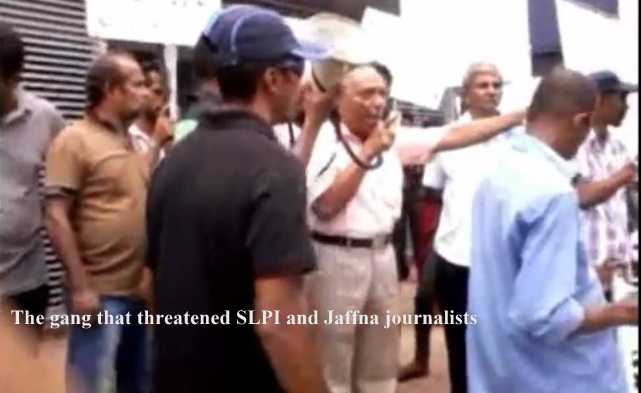 By SLB –
Leader of the mob which  disrupted the media workshop that was to be held in the auditorium of the Sri Lanka Press Institute warned that ” if this institute allows any such training in the future don’t say we are bad boys”.  The person who can be clearly indentified in the video was referring to a workshop where Tamil journalists form the Jaffna were  invited.  This flagrant violation of peoples right to association and expression took place in the heart of the city on 26 July 2014 .

This statement was a clear warningthat  they are ready  use the violence against Tamil journalists if they come to participate in training workshops in South of Sri Lanka.  The mob leader  further warned that if such workshops are held any where in the country they will be there to stop them.

The mob leader using megaphone shouted that ”SLPI is a Brothel  of Tigers and not a institute of journalists”. He called on the people to rise up against these activities to safeguard the future of the country.  He bosted that Tamil journalists who came for the workshop  have fled and the workshop has been cancealed because of their presense.

Issuing a press statement, the largest journalists union of the country the Sri Lanka Working Journalists Association said that this act of intimidation of media was carried out by the government orchestrated mobs.

Speaking to SLB form Coombo a press freedom activist said that  this could be  the initial stage of formetion of a parallel  extremist set up in the lines of extremist Bodu Bala Sena.

The Sri Lanka Press Institute (SLPI) was established and manage by  the Newspaper Society of Sri Lanka, The Editors’ Guild of Sri Lanka, the Free Media Movement, and the Sri Lanka Working Journalist Association, to provide direction and leadership in media related activities.