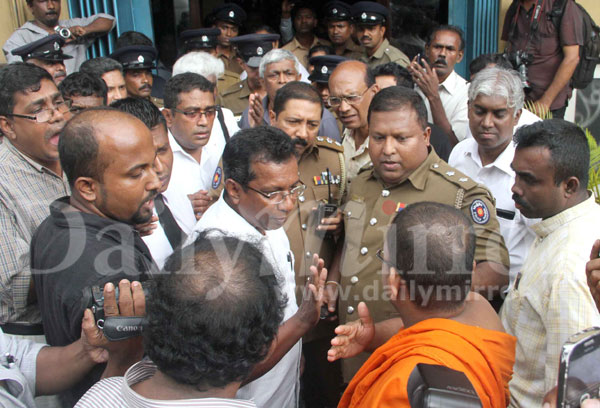 [ Co Convener of the Lawyers Collective J.C. Weliamuna talking to the mob; Photo by Melani Manel]

Responding to a statement made by the Ministry of External Affairs (MEA) on 5th August 2014 on the   incident at CSR, the Lawyers’ Collective cautions the public not to be misled by the inaccurate contents of the statement of the MEA. (see the MEA statement at the end of this Statement)

Those who were present at the meeting held at the Center for Society and Religion including the Lawyers, Religious Dignitaries and invited members of the diplomatic community witnessed with utmost horror the manner in which the unruly mob (which included Buddhist monks) invaded and intimidated a peaceful gathering and terrorized participants including children, using abusive language.  If there was any doubt about the mob had direct links with the Government, such doubts were now cleared by the MEA, by justifying the violent intruders as a peaceful NGO termed “The dead and missing persons’ parents’ front”. Such NGO or group was hitherto not known and we could not find how such a powerful organization had suddenly come into operation, to be recognized by the MEA in a day! MEA also falsely state that these unruly mob sought access to the meeting to air their grievances  but in fact the mob  threatened the organizers to stop the meeting.  The MEA implies that it was arguments between this group and the organizers and participants of the meeting which led to tensions, when it was abundantly clear to all concerned that tensions arose due to the illegal invasion of a private property and a private meeting by the unruly mob.

The MEA has however chosen not to explain why law enforcement authorities failed to enforce the law against the violators of criminal law of the country in a private premises (belonging to the Roman Catholic Church). It also doesn’t explain why the Police refused protection to victims, demanded cancellation of the meeting and asked that the Tamil participants from the North be sent back home.  The statement of the MEA is a continuation of whitewashing of the disruption of peaceful meetings in the country in violation of freedom of association.

The large contingency of security personal including sleuths from the intelligence divisions undoubtedly knew that this mob had the protection and shield from the Government and therefore they were unable to arrest the unruly criminal intruders.

It is amusing that the Ministry of External Affairs is now trying to pin the blame on the presence of the diplomatic community in their search of a scape goat, alleging that it was their presence which perpetuated mistrust among communities in Sri Lanka. As lawyers who have been actively and constantly monitoring the situation in the country, we state that it is the intolerance of dissent and cultivation of extremism on the part of the Government that has created the mistrust among communities in Sri Lanka. We also recognize the positive contributions made by leading personalities,  local and abroad,  including the diplomatic community whose  intervention has been extremely important  to protect democracy in the Country today.

—————————————————————————–
MEA statement issued on 5th August 2014
External Affairs Ministry Statement on the Meeting at CSR on 4th August
The attention of the External Affairs Ministry has been drawn to an incident that occurred at the Centre for Society and Religion in Colombo on 4th August. According to reports, a meeting had been organized by the NGO “Right to Life Human Rights Centre” involving families of disappeared persons from the North. However, another NGO, the “Dead and Missing Person’s Parents Front”, had sought access to the meeting, demanding that their grievances be heard too. An ensuing argument had led to a tense situation which had subsequently been brought under control by law enforcement authorities. Several diplomatic representatives from western Missions based in Colombo had also been present at the event.
While recognizing the fundamental right to freedom of assembly and expression, the Ministry wishes to point out that that, once again, a certain section of the diplomatic corps appears to be involved in a manner lacking in objectivity, in events organized for a particular region and community. This has led to the emergence of a pattern of such potentially volatile situations giving rise to the perpetuation of mistrust amongst communities at a sensitive juncture in the country’s history.
The Ministry wishes to urge the diplomatic community to be more conscious of local sensitivities when attending events of an emotive nature.