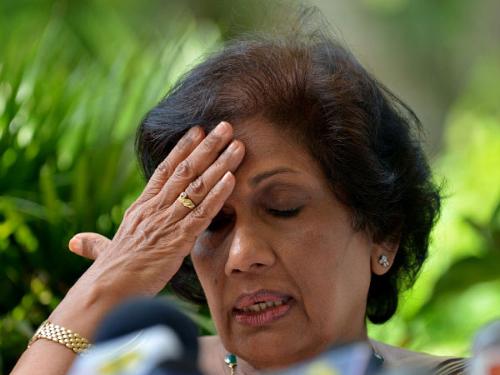 In a major ironical twist unfolding before our eyes, former President Chandrika Kumaratunga has seen fit to wax eloquent on the importance of judicial integrity this week. Addressing a press conference, she is reported to have said that, over the last decade, the Sri Lankan public in general and she in particular, had lost ‘confidence in the judiciary.’ It was observed by her that ‘the Lokka’ had to give just one call to obtain whatever judicial orders that he wished.

Assessing the judiciary under Kumaratunga
These are richly farcical sentiments coming from a President under whose imperial command the Supreme Court of Sri Lanka commenced its ignominious descent into the worst post-independence controversies in the history of that once august institution.

The International Bar Association (IBA) put this very well in its first fact-finding mission to the country under the Kumaratunga Presidency. Concern was expressed regarding the undermining of the separation of powers between the executive and the judiciary. The lack of accountability of the Judicial Service Commission (JSC) was particularly worrying. The mission observed that ‘it was not confident that the JSC is acting entirely without outside interference’ (see ‘Sri Lanka: Failing to protect the Rule of Law and the Independence of the Judiciary,’ IBAHRI, November 2001).

Its second mission a few years later concluded with severe cautions in regard to the increased politicization of the judicial institution. Regardless, vociferous civil society critics and seniors at the Bar who had held forth on the misdeeds of the JR Jayawardene regime were silent during that period and suddenly became vocal again only after Kumaratunga was thrust out of power.

Has actual change occurred?
The results of this culpable and compromised silence were predictable. Under Kumaratunga’s successor, Mahinda Rajapaksa, Chief Justice after Chief Justice failed to strengthen the judicial institution resulting in the calamitous collapse of public confidence. Certainly Rajapaksa excesses far surpassed what had gone on before. Yet, this was to be expected, given the character of that political leadership.

The summary removal of (former) Chief Justice Shirani Bandaranayake, (who was by no means, non-controversial in office) with less ceremony than that afforded to a common criminal was the culmination of that long and miserably subverted decline.

True, these were significant factors in compelling the January 2015 ‘peoples’ revolution.’ But has this actually led to concrete changes in structures and systems? President Maithripala Sirisena excels in pleasing rhetoric. And to give the Sirisena-Wickremesinghe administration due credit, it has not resorted to Medamulana strong-arm tactics in handling the judiciary. Yet does this suffice? This question can only be answered in the negative.

Silence of formerly vocal voices
And true to past patterns of behavior, where are the once vocal voices of the Bar Association? One exception was the Bar’s recent call upon the Government to reverse the special appointment of a Commissioner of the High Court to hear cases of detainees kept under the Prevention of Terrorism Act.

Such a special appointment was said not to be justified when there were pending vacancies in the regular High Court cadre. However this protest meekly subsided to kittenish mewling when the Minister of Justice with characteristic bravado, abruptly dismissed that call and went ahead with the appointment.

Indeed, the Bar should have taken a strong stand on the claim made by this Minister in Parliament that he had prevented the arrest of former President Rajapaksa’s brother Gotabhaya Rajapaksa in connection to the notorious Avant Garde controversy. Yet we saw nothing of the sort. In the result, the resignation of the former Minister of Law and Order following similarly scandalous statements in the House was rendered a mere superficiality.

Emphasizing certain home truths
But apart from this display of amusing acrobatics on the part of onetime strident advocates, there are certain home truths that need to be administered to our politicians. First and foremost, this Government and its drivers in power, including former President Kumaratunga, must not treat the Sri Lankan public as morons. This column’s weary revisiting of past travails of the Court in its opening paragraphs was necessitated by that airy talk of frolics by the Rajapaksa ‘Lokka’ while beautifully ignoring the decline in judicial integrity under her own Presidency. That is unacceptable.

So as the former President lectures all and sundry on accepting the mistakes of the past, some of that advice may well be directed towards herself. But honest contrition is unlikely to be manifested. Second, while the public is not asinine enough to swallow what amounts to political piffle, there are greater lessons in hand. Thus, this notion that all wrongs were limited to the Rajapaksa period is generally accompanied by the claim that ‘instant’ Special Courts will be a magic solution in restoring lost judicial integrity.

Unsurprisingly this was the connection again made this week by former President Kumaratunga. But this is a misconception that is in part dangerous and in part, foolish. Certainly this may suit the Government’s political agenda, enabling it to strike out ‘high risk’ individuals as well as satisfy the demand for accountability. Yet, failure to take collective political responsibility and embark on systemic reform of mainstream justice institutions will only aggravate a continuing legal vacuum that we see.

Not abstract warnings
These are not abstract warnings. The apathy of the Government in enforcing the law against gross corruptors flows from this same dysfunction. So is its inability to either charge or release long-time Tamil detainees under anti-terrorism laws or properly address the exponential rise in sexual violence.

For example, the enactment of the 19th Amendment does not automatically solve the question of the public accountability of the JSC. This is a safeguard that should be secured through well thought out reforms, rather than made to depend on the persona of a particular Chief Justice. Neither will ad hoc special courts restore judicial integrity. We have many illustrative examples from the past proving that point.

It is also difficult to believe that a ‘truth and reconciliation process’ will be a panacea, whatever that may conceivably mean to our skeptical ears. Over and above the rhetoric, political will must be evidenced to end impunity. The current law more than suffices for this purpose. Yet unfortunately, we are still to see this, in the North as well as in the South.