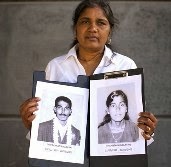 The commission appointed by President Mahinda Rajapaksa to investigate incidents of disappearances during the war has sought an extension to the time period it was given by when to complete investigations.
Former Judge Maxwell Parakrama Paranagama, who is heading the Commission, said that so far the Commission has received 8000 complaints on disappearances.

Of the complaints, 4000 involve civilians and the rest were from family members of the security forces.

The most number of complaints were received from Kilinochchi, he told reporters at a media briefing today.

The Commission, which was appointed in August, was given a six month period to complete the investigations and hand over a report to President Mahinda Rajapaksa.

However Paranagama says the Commission feels it needs more time to complete its inquiries and so will seek an extension.

The Commission has been given the authority to conduct inquiries and investigations necessary, and submit a report to the President. In President Rajapaksa’s instructions to the Commission, he stressed the necessity to identify the person(s) responsible in cases where abductions or disappearances are found to have taken place and to take legal action against those person(s).

The President indicated that the inquiries are being conducted in the interest of public security and wellbeing and in order to determine what measures should be taken to prevent such incidents from occurring in the future. (Colombo Gazette)