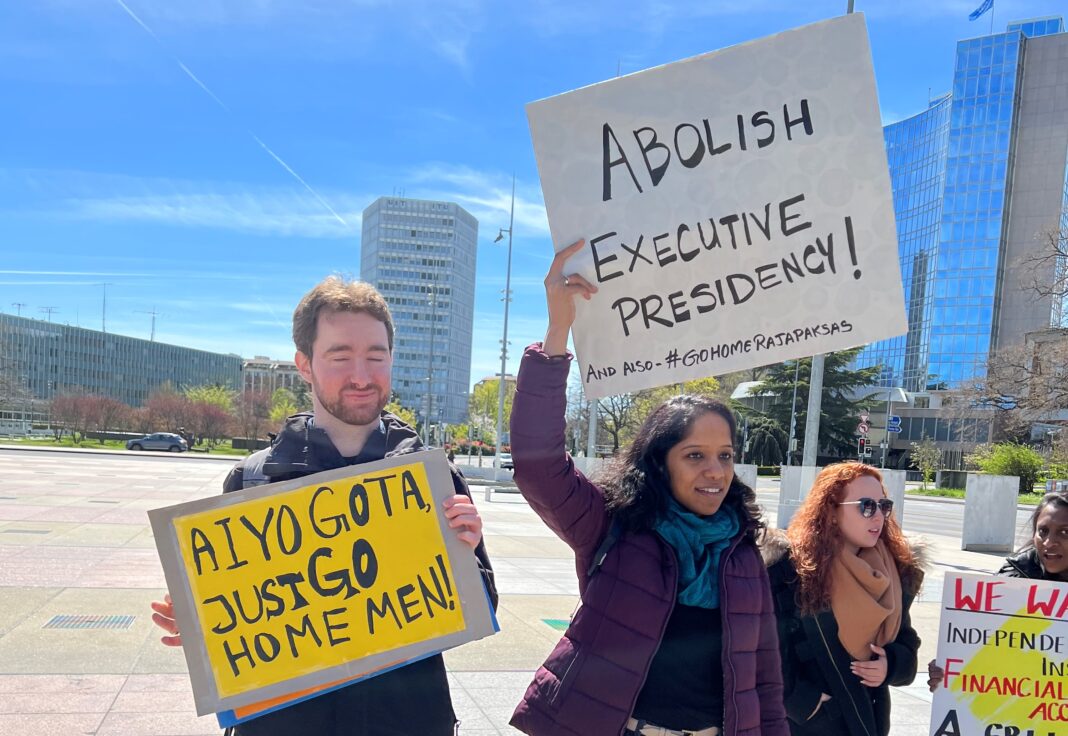 It is very hard for the protesters to shift tack, because there are many tens of thousands. It is difficult for parliament to move, because at least 113, out of the 225 members, must agree. But it is easier for the President to change course because he can take a decision and implement it on his own. So what can he do that meets the concerns of the protesters?

The President can declare that he is ready to get rid of the executive presidency. He can commit to initiating a process of constitutional change within parliament to do that. He can also commit not to serve out his term, but to quit as soon as the amendment is passed. This will require a vote in parliament and may also require a referendum. He should set a deadline to fulfill this commitment before the end of this year. This will be the first step towards unlocking the political deadlock.

Prez can declare that he will get rid of the exe prez. He can initiate a process in parliament. He can quit when amendment is passed. This may require a referendum. He should set a deadline to fulfill this commitment before the end of this year. https://t.co/Bwu5uLEhma

He will now, with credibility, be able to invite all political parties represented in parliament to form an all-party transitional government. In response to the call of the protesters, he should also commit to exclude all Rajapaksas from the cabinet. He can accept a consensus figure as prime minister. This transitional government should take us from our current political and economic crisis to a new beginning. It will have to undertake three tasks in parallel.

The first is to manage the process of constitutional reforms that lead to the abolition of the executive presidency. This can also be an opportunity to make substantial democratic reform. We should change the electoral system to make representatives closer to the people and more reflective of the diversity of our country. It is also an opportunity to resolve the ethnic tensions in our country that have plagued us since independence through greater autonomy to the regions. And it can also encourage participation of the Tamil and Muslim communities in the central government, thus sharing power.

The second task is to deal with the economic crisis by negotiating with the International Monetary Fund, and government and private creditors, about how to manage our debt. This would also include drawing up an economic plan that prioritises growth and pro-poor welfare measures. Sri Lanka has a long tradition of education and health policies that have favoured the poor. We can build on this, to get ourselves out of the current crisis with minimum pain and move towards more sustainable growth. Most importantly, negotiations with the IMF should be based not just on conditions that echo neoliberalism, but should strengthen socio-economic rights and stimulate growth in knowledge sectors, where Sri Lanka can thrive.

And finally, this transition government must hold a parliamentary election within a year. This would ensure that a government with a strong mandate from the people can deal with the next set of challenges.

By declaring his willingness to terminate the executive presidency, and only be in office until the constitution is amended, the President will help end the political deadlock in Sri Lanka. He would also have cemented his own legacy, as a rare Sri Lankan president who actually delivered on his public commitment, by listening to the people and reducing the extraordinary powers that he had as the executive president of the country.

(The writer is a Visiting Professor at the University of Amsterdam and Director of the Dialogue Advisory Group.)