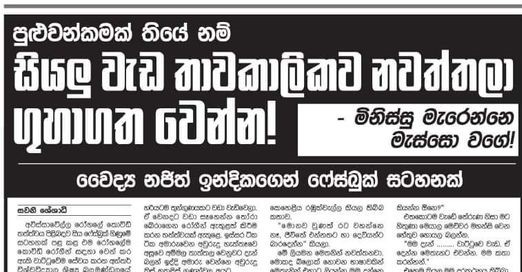 Deputy Inspector General of Rathnapura district, B.R.S.R. Nagahamulla has sent two police constables to check the mental situation of Dr.Nalin Indika, after he wrote in his Facebook that “people are dying like flies, please be careful of Covid-19”.

Dr.Indika is in charge of Covid-19 ward of the Avissawella hospital in Rathnapura district.

His post-dated 13th August went viral as it gives a true horrifying situation in the Covid-19 ward of the hospital.

“The hardest part of it all is to face the gaze of people their eyes when they die, when they breathe hard with the expressing “Are you going to do something to save us?”

The number of deaths that have occurred in the past about one in  two days has changed to four to five a day within a week.

If the number of patients increases at this rate for another two weeks, people will die in chairs, on the floor and in the yard due to lack of oxygen.

So, when I came home last evening after seeing all this, I saw the story of  Minister Keheliya Rambukwella.

“No matter what, the country will not be lockdown, All will be vaccinated and the rest is in God’s hands.”

This post stops here. Because I do not want to get my page blocked.

Please be as careful as much as possible!

If possible, pause all work and go to a cave!

The Police officers from the Criminal Investigation Department of Sri Lanka police visited him on two days later, 15th August.

They told the doctor that they had come on an order issued by the Ratnapura DIG and had been instructed to find out the doctor’s mental condition.

Dr. Indika has posted the dialogue he had with two police officers as follows. Though hilarious the message behind the lines is clear: be careful doctor, you will be end up in a lunatic asylum!

Me: Come on. Did you two say that you are from the CID?

Me: Did you come from Colombo, or you are based here in Avisssawella?

Me: (Laughs) the order come from here or from Colombo?

Me: All right. What are you told to look for now? To find out what I wrote is a lie?

CID: Please no sir.  DIG sir told me check your mental situation and see if you are under stress. (Laughs innocently)

Anything else to know?

I took 10 minutes to explain to both of them how the number of corona patients reported and deaths increased over the past month, how the ward facilities have improved, the big changes that happened last week.

Then they both thanked me and left. I said goodbye to them and went to see the next patient queue. By the time this is over, it’s 6.40pm.

During it all, seven people have closed their eyes by this morning!”

This is an indirect warning to a public official who is doing his duty to save lives, a human rights defender told Sri Lanka Brief.

What are you doing, Minister, criticizing our tired healthcare workers, instead of supporting them at this critical juncture? This is the same Minister who apparently wasn't advised by health experts to lockdown the country despite numerous calls from many to do it. https://t.co/Q7z1RlsIvv