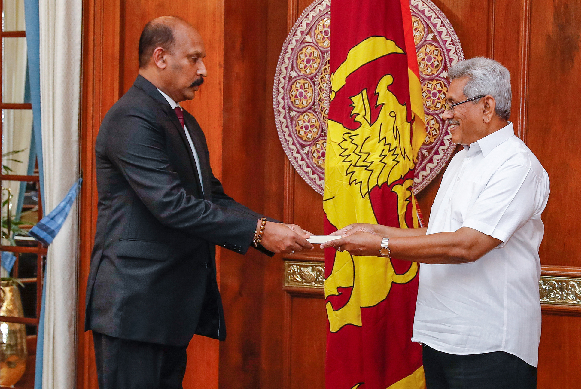 Institute for Democratic Reforms and Electoral Studies (IRES) Executive Director, Manjula Gajanayake, said that he hoped the media reports to the effect that Defence Secretary Kamal Guneratne not heeding summons made by the Election Commission of Sri Lanka were not true.

Addressing the media, Gajanayake said that there were media reports of the Defence Secretary not attending a meeting summoned by the Commission to discuss security matters, pertaining  to the forthcoming local government elections.

Gajanayaka pointed out that if any public official refuses, or fails, without a reasonable cause, to comply with the Commission, he or she has committed an offence as per the Article 104GG of the Constitution.

The Artice 104GG of the Constitution states: ”(1) Any public officer, any employee of any public corporation, business or other undertaking vested in the  Government under any other written law and any company  registered or deemed to be registered under the Companies Act, No. 7 of 2007, in which the Government or any public corporation or local authority holds fifty per centum or more of the shares of that company, who – (a) refuses or fails without a reasonable cause to co-operate with the Commission, to secure the  enforcement of any law relating to the holding of an election or the conduct of a Referendum; or (b) fails without a reasonable cause to comply with any directions or guidelines issued by the  Commission under sub-paragraph (a) of paragraph (4) or sub-paragraph (a) of paragraph (5), respectively, of Article 104B, shall be guilty of an offence and shall on conviction be liable to a fine not exceeding one hundred thousand rupees or to imprisonment for a term not exceeding three years or to both such fine and imprisonment.

The election monitor said that public officials should act in accordance with the Constitution and not contravene it at the bidding of their political masters.

Original caption: It’s an offence for public officials not to comply with EC directives – IRES