Devolution unnecessary; 13 A should be abolished and Sri Lanka should ignore India – Gota 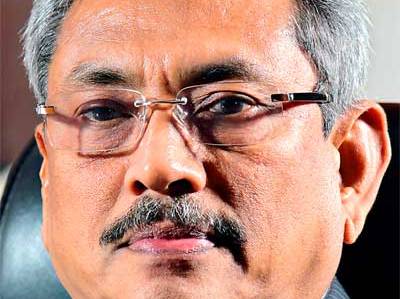 The country’s powerful Secretary of Defence Gotabaya Rajapaksa spoke to the Daily Mirror in one of his most wide ranging interviews in recent times, on a gamut of issues.  Rajapaksa explained why he believes that devolution of power is not the solution to the national question. Edited version of the original interview follows:

Q:Isn’t the argument however that the majority of those living in the North are from the Tamil community and therefore they aspire for self- governance?

That is the problem. That shouldn’t be the case. This happened because the LTTE prevented any other community from entering these areas. They ethnically cleansed the North. For thirty years there was no growth of Sinhalese in that area. The reverse never happened in any other area. Tamils were allowed to come to any other province and settle down at any time as they wished, during this period. But the Sinhalese weren’t even permitted to enter the Northern Province.

If the situation was normal there would have been more and more Sinhalese in the Northern Province. I would know this because I served in Jaffna as a 2nd lieutenant. There were Sinhalese in Jaffna, Kilinochchi, Mullathiwu, Vavuniya, Mannar and other areas. What happened to these Sinhalese?

Not only were the Sinhalese chased out, they weren’t even permitted to enter the areas, so obviously it was confined to Tamils.

If normalcy prevailed this entire situation would have changed. It is nothing but true and correct that in the North and East there must be the same percentage of the majority community. When 78% of this country comprises Sinhalese how does such a vast landmass in the North become 98% Tamil. Isn’t this unnatural? This was forced. Natural growth was prevented.

Take Police powers for example, when one says Police powers would solve the ethnic problem that is faced, tell me how does that same model work in the Eastern Province?

In the Eastern Province you would never get a Tamil Chief Minister. Mr. Pillayan was appointed CM only because the President wanted him to be the CM, despite a lot of pressure from the Muslim Ministers. How can you say that under a Muslim Chief Minister there won’t be the same issues the Tamil are facing?
If this is the argument and if this is the theory- that devolution would solve the problem, I want to know how it solves the issues of the Tamils living in the Central Province who live without any concerns under a Sinhalese Chief Minister. How about the Tamils living in Uva? In Sabaragamuwa? Do you know that in the Ratnapura District, there are more Tamils than in Kilinochchi?.

What about their concerns then? There is simply no logic in this argument.

Q: You earlier said that the strained relationship with India caused the LTTE. Accordingly if one is to take that the 13th amendment was India’s creation don’t you think that it would cause a problem now with India by backtracking it?
This is why I said we should not listen to India. This is our problem. Diplomatic relationships are different from this and we should not mix the two up. We should have good diplomatic relationships with India, Pakistan, China and everybody.

But India and Sri Lanka are two countries. This problem is inherently a Sri Lankan problem and should be solved by Sri Lankans.

If the relationship of these two countries is strained on this one issue then it is wrong, even on India’s part. I have spoken to the new High Commissioner, and the Indian Officials and they have never said that relationships would be strained because of this issue.

This is our country and it is our future that we are talking about here. We can’t sacrifice this country’s future due to pressure from any other country, be it India, US or Europe. We will live for a very short period but for generations and generations to come Sri Lanka must remain a sovereign independent  and a peaceful state.
We made a mistake earlier by giving into external pressure with regard to the method of governance in this country.

Q:Are you therefore calling for the complete repealing of the 13th amendment?
I think that’s the way forward. But that doesn’t mean that I’m against decentralisation, it is good but it has to be practical. It has to be beneficial and it has to be sustainable. Also decentralisation must ensure peace and stability in this country.

You should not segregate places- to demarcate certain areas based on ethnicities. That is not reconciliation. Reconciliation is bringing people together; it is about ensuring that people think as one nation.

A person can have his own religion, culture and identity, but that is different from this segregation. Mixed cultures can enrich the culture of a nation. The Sinhalese and Tamils have their own culture and that is a good thing but it should enrich a nation rather than alienate them within the country itself.

Q: Moving on to another direction, despite this country being one of the few countries that has not seen terror since the end of its war in 2009, there has been a sudden rise in communal tensions?
This again I see as a reaction to some of the claims and things done by the minorities. We shouldn’t let these things come out. Remember the majority community is 78% but if some 8% or 10% of the community tries to bring various issues all the time it creates a suspicion among the majority community. It creates insecurity within the majority community and obviously there will be sections reacting to that. This is what happened. And this is why I say that we should not alienate issues to be regarded as Tamil or Muslim issues. This will only give opportunity to the majority community to bring out these issues.This is where communal problems arise. Instead we have to discuss these issues on a common basis. Definitely if the minority communities feel certain problems, I don’t think anyone will oppose them bringing it up.I recently read a news item in one of the papers that in Kalmunai that the Tamil community has approached the Bodu Bala Sena to solve some issues, they have with the Muslim community. Now see where is the end? Where is the end? This will never bring us anywhere.

Q:There is also this other allegation surrounding the Matale mass graveyard against you, what do you have to say about this?
This should be investigated impartially, independently and transparently. I don’t want to comment on it since an investigation going on.

I have my comments but I don’t want to make them right now, let there be an independent, thorough transparent investigation.

If these skeletons are from that era, although I think it was from before that, then a lot of people were blamed for the atrocities in that era. But there is one thing that should be made very clear- the yard was not found in a jungle or in someplace that could not be located. It was found within the premises of a Hospital. Therefore, there is a person responsible of the hospital and I think the investigation should start there.

My argument is that these were not found in the jungles or in someplace that was hidden, it was found in a public place and the investigation could begin there.

There were a lot of people blaming both the JVP and the government at the time and these are the groups that would know what happened if the skeletons are in fact from that era.