Devanagala – Latest in the racist agenda to provoke Muslims 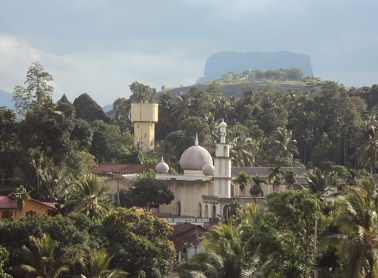 Devanagala is a beautiful peaceful village in the central hills about six kilometers from Mawanella on the way to Hemmathagama. The village has been known for the rock called Devanagala Rock. There is a Buddhist temple and an inscription on the rock. According to those in the village Devanagala area was believed to have been the place from where Sinhalese kings dispatched garrisons to different places. Muslims in the village claim that they were settled there by Sinhalese kings to defend the Kandyan kingdom from invaders.
People in the area, both Sinhalese and Muslims alike, have been farmers and small time traders .They were living for generations like one family caring and sharing for each other. Even during the 2001 anti Muslim riots in Mawanella, Devanagala area was unaffected as both Muslims and Sinhalese there lived in traditional harmony.
During the past few decades Muslims concentrated on education and produced numerous professionals, intellectuals, religious scholars and others. Thus their living standard improved.
Today’s racist rabble rousers, following their personal agendas to the detriment of all, were   unheard of even five or six years ago.
It appears that racism has its origin during the State Council days when in 1940 under the archaeological act this rock was brought under archaeological department and a distance of fifty yards from the rock  declared as a buffer zone.
Those who issued the gazette notification were aware that both Sinhalese and Muslims lived in the area and the interest and welfare of the two communities need to be taken into consideration. However there was no such human consideration, when it comes to Muslims’ rights, in bringing the rock under the archaeological department. 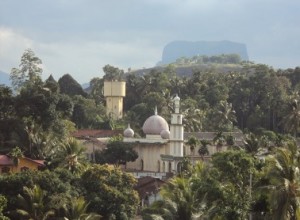 This act was revised by a 4 June 2004 gazette notification which increased the buffer zone from fifty yards to 200 yards. In yet another gazette notification a year later in 2005 the buffer zone was increased to cover 400 yards bringing a sizable population of Sinhalese and Muslims within this buffer zone.
In the buffer zone around the rock today there are around 500 Muslim families with little more than 3000 people. Muslims have documentary evidence dating back to around 200 years to prove their presence in the area and some claim that they were living there for more than 400 years. Their rights were simply dismissed when the rock and buffer zones were gazetted
People in the area were not aware of these gazette notifications and its implications in their lives and properties .They went on with their routine life unaffected by these gazette notifications and the ever expanding buffer zones.
However ever since the 2004 gazette notification handful of Sinhalese from outside Devanagala area  began to  claim that  the rock and the area surrounding the rock  belongs to  Sinhalese and began rising racist slogans against Muslims. The aim was to put the Sinhalese against the Muslims.
Encouraged by the overall support the racist elements received from the authorities to impose their views on the Kuragala rock issue, here in Devanagala too they began a campaign to evict Muslims living around the Devanagala rock within 400 yards.
However even today most Sinhalese in the area have nothing to do with this anti Muslim campaign. They point out that not only Sinhalese but Muslims in the village too protected the rock which the Muslims visit every time visitors come.
According to the people in the area, in the aftermath of the Kuragala issue, two controversial pradeshiya members, not from the Devanagala area, formed an organization called “Maithree Sahana Patahanama”-MSP. This has nothing to do with the Sinhalese in the area or the mainstream Sinhalese community.
The newly formed   MSP began poisoning the minds of Sinhalese aimed at inciting them against Muslims as has been done in other areas in the island. As part of this program they distributed hand bills.
Though the Devanagala rock is of archaeological and not religious importance the MSP repeatedly demanded the archaeological department to evict the Muslims from the area from the   buffer zone as it was a sacred area where only Buddhist should live. Under pressure from these racist elements and, perhaps from other invisible forces, the archeological department officials visited the area and tried to demarcate the rock and the buffer zone.
People in the area pointed out that there is no approved survey plan and no research was done to clearly identify the historic rock. As a result people in the area, both Sinhalese and Muslims, remain confused as to how the archaeological department is going to decide which is the rock and where the buffer zone is.
Muslims asked officials how they would demarcate the rock and the buffer zone without a proper approved plan. Muslims also pointed out that they posed no threat to the rock and asked why they should leave the place where they lived for centuries.
They asked why the archaeological department should implement MSO racist elements’ agenda against them and accuse the archaeological department officials of 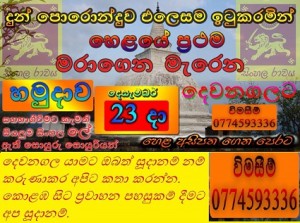 making contradictory statements.
Meanwhile the archaeological department has banned Muslim owned buildings in the buffer zone from carrying out any repair work to their buidings without their prior approval.
The most shameful aspect of the MSPs demand is that only Muslims in the buffer zone   should be evicted and not the Sinhalese. When the Muslims questioned the unjust nature of this request, the archaeological department officials have no answer.
People in the area want to go ahead with their day to day life in peace as in the past before MSP came into the scene. However racist elements are hell bent on making this a flashpoint without realizing the seriousness.
A meeting was held at the Kegalla Kachcheri on 4 December 2013. It was attended by Ministers Athauda Senevertne and Jagath Balsuriya, Director Arachaeoloigal department and his team, AGAs, GA and DS, Muslims from the village involved and the MPS representatives.
Following the meeting it was decided that the officials of archaeological department visit the area before demarcating the rock and buffer zone on December 23 .This date was postponed.
With the government taking no measure to protect, helpless Muslims in the village live in fear not knowing what is going to happen to them .
Now the question is whether driving out Devanagala Muslims from their ancestral lands and homes is the priority at a time when the country is passing through its most difficult period in history in view of the lawlessness, crime and corruption.
This move strikes the very basic human rights of Devanagala Muslims. The tragedy is that this happens at a time when the country is facing   charges of human rights violation from many powerful quarters.
The government talks about reconciliation and communal harmony while turning a Nelsonian eye to the lawlessness and the flouting of the basic human rights of the Muslim by a handful of racists. Indications are that no lesson was learnt from the racist slogans of the past which turned the country into Asia’s worst killing field for decades.
Muslim politicians turned out to be sell outs and clinging on to the government despite repeated harassment of Muslims.
Under the circumstance Muslims remain a frustrated lot. Is it the eruption of this bottled up frustration that these mischief makers are looking for?  Perhaps these provocations are to force Muslims to react so that racist elements could attack Muslims island wide to commemorate the 1915 Sinhala Muslim riots?
LF
Share
Facebook
Twitter
WhatsApp
Pinterest
Email