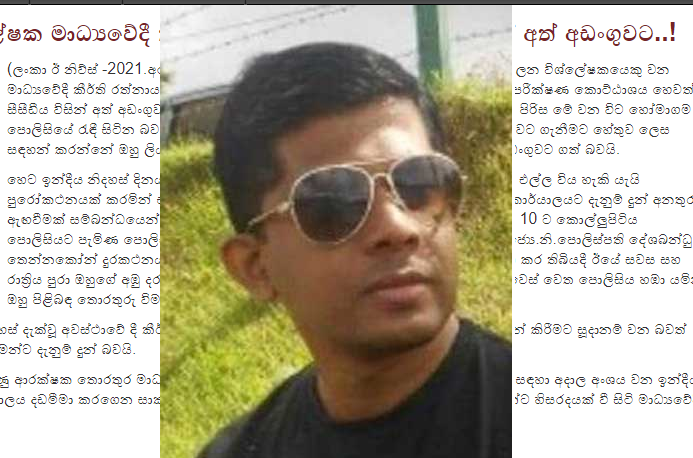 Attorney at Law (AAL) Upul Kumarapperuma has written to the President of the Bar Association of Sri Lanka over an alleged threat to the life of his client, the recently arrested Ex-Air Force officer Keerthi Rathanayake.

The letter details that Rathanayake was asked to report to the Colpetty Police Station this morning to record a statement in respect of the information provided by him about the security of the Indian High Commission in Colombo. It also noted that he would be accompanied by an officer attached to the High Commission.

“However at one point my client was arrested by the officers attached to the Colombo Crime Division (CCD) and he was brought there. Thereafter Mr. Amila Egodamahawatta AAL visited the CCD upon my instructions and met my client in the presence of the OIC and several other officers of the CCD,” Kumarapperuma details.

The letter further states that Egodamahawatta was informed by the said OIC that they would obtain a detention order under the PTA for three days for investigations.

Kumarapperuma goes on to mention that following this, a close friend of his client informed him that the CCD plans to take his client to Kandy tomorrow morning (16) and that there is great danger to Rathanayake’s life during the journey to Kandy.

“In the aforesaid circumstances, I humbly request you to intervene in this matter and inform the relevant authorities to safeguard his life,” Kumarapperuma urged the President of the BASL.