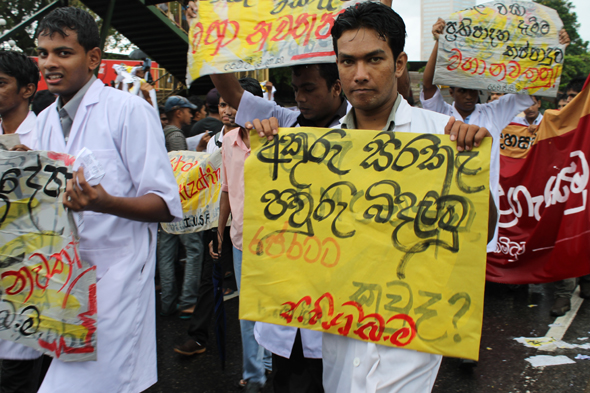 The Political Bureau of the JVP has issued a press release condemning the attack carried out on the peaceful demonstration of university students by Rajapaksa government deploying its police force.
The press release states, “The police using tear gas and water cannon has repressed the peaceful agitation organized by the Inter University Students Federation yesterday (29th) to demand the government to solve the issues of university academic staffs and non-academic staffs and reopen the universities immediately.

The JVP vehemently condemns with contempt the attack carried out on university students’ peaceful agitation by the Rajapaksa regime deploying its police force.

What the government should do now is solve issues and reopen universities instead of attacking with tear gas and water cannon and repress students who demand reopening of universities.  Agitating for their right for education is a just right of students. On the other hand, who else would agitate to open the closed down universities if the students do not do so is an issue.

We demand the government to immediately solve the issues of university teachers and the non-academic staffs and reopen universities. We also call upon all progressive masses to come forward against the arbitrary and repressive regime.”
LT