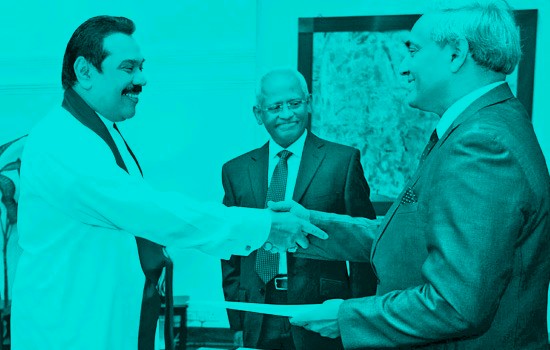 All right thinking people of Sri Lanka unequivocally and unreservedly condemn the purported appointment by President Mahinda Rajapaksa of Mr. Mohan Peiris as the Chief Justice of Sri Lanka. This utterly irresponsible act of the President is in defiance of the judgments of the Supreme Court and the Court of Appeal. It is the position of all those in Sri Lanka who believe in democracy and the rule of law that Dr. Shirani Bandaranayake is, and continues to be, the lawful Chief Justice of the Democratic Socialist Republic of Sri Lanka.
It is unprecedented in the history of our country for a Head of Government to so blatantly violate the Constitution, undermine the authority of our Judiciary and destroy the Rule of Law. In so doing, the President has demonstrated the callous disregard for International Law, and the fundamental principles and values of the Commonwealth, which Sri Lanka, as the next host of the Commonwealth Heads of Government Meeting, is bound to respect and espouse.
The purported appointment as Head of the Judiciary of an individual who serves as an Advisor to the Cabinet of Ministers, and was previously an Advisor to the Ministry of Defence, and who on numerous occasions has defended the Rajapaksa Government’s dubious Human Rights record in various international institutions and organizations, and made claims which have yet to be established as true, will result in Sri Lanka becoming an international pariah state. Mohan Peiris is the regime’s choice for Chief Justice because from the moment they place him on the chair, they are certain of being able to wield their influence completely and unequivocally over every court of the land. The international Commisssion of Jurists has condemned this appointment saying it deals a death blow to the rule of law and accountability in Sri Lanka. The ICJ in its recent report on impunity in Sri Lanka highlighted Mohan Peiris’ “lack of independence as Attorney-General, noting the alarming number of cases involving prominent politicians that were withdrawn during his tenure.” Naturally, this man is the regime’s first choice to head the judiciary of Sri Lanka.
This regime stands exposed today, for precisely what it has become. Drunk on its popularity created by the victory over the LTTE, the ruling regime has turned on the people and is no longer interested in hiding its autocratic face. The day that the Sri Lankan Government stamped on the constitution and discarded the values prescribed in it, as determined by the country’s highest court, in order to exact vengeance from a judge who asserted her independence on the bench, marks the day that this great republic, officially became a dictatorship. Since then, everything the regime has done has only lent further credence to that claim. It has used the might of the armed forces and law enforcement to turn the Temple of Justice into a garrison so that it could safely place its desired Chief Justice on the chair. On January 15, it went so far as to check the identity and cars of the honourable justices of the Supreme Court in order to ensure they were not attempting to smuggle Chief Justice Shirani Bandaranayake into the court house. It has vilified and insulted the country’s first woman Chief Justice by treating her worse than a common criminal. The regime’s actions have made it very clear to every citizen what the price of dissent can be. The road ahead of us has never seemed quite so dangerous. It is necessary to awaken to this injustice and dictatorial trend now, or be doomed to suffer its consequences for decades to come.
The decision of the President to make this illegal, unconstitutional appointment to the judiciary’s highest chair is nothing short of a national betrayal. It is unforgivable that a political ruler, who purports to be nothing but a custodian of the values and tenets upon which this republic was founded, has sought to wilfully destroy and subjugate the final steward of democracy and rule of law, by reducing the judiciary to the status of nothing more than just another public institution, in which heads will roll at the whim of a dictatorial executive.
At this critical juncture in the history of this country, we remain committed to protect the Constitution of our Republic, the independence and integrity of our Judiciary, and the fundamental rights and freedoms of our citizens. This is the intangible heritage that guarantees the dignity and well being of present and future generations of all Sri Lankans.
Share
Facebook
Twitter
WhatsApp
Pinterest
Email