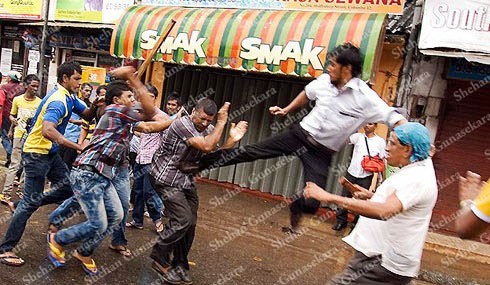 Kishali Pinto Jayawardene
As the sun went down this Friday on bare bodied ruffians raucously celebrating Parliament’s spectacularly unjust impeachment of the country’s Chief Justice with crackers and kiribath, judgment fled to brutish beasts and Sri Lanka entered its darkest phase since independence.
This Government with its ineffectual ally, the main Opposition United National Party, could together boast of seemingly levelling a death blow at the last remaining bulwark of a defiantly rebellious judiciary. In truth, LTTE leader the late Velupillai Prabhakaran achieved in death through the monumental follies of ‘Dharmishta Sinhala’ leaders, what he could not accomplish in life.

Henceforth, in what manner are Sri Lankan judges supposed to preside over their courtrooms with dignity? In what way can lawyers advocate the law with heads held high, what will law teachers be able to teach in the classroom and how will analysts in good conscience examine Sri Lanka’s conformity with the Rule of Law?

A new and eagerly supine Chief Justice will be appointed during the coming days. But this will be a pyrrhic victory. With the Commonwealth and the world staring in helpless bewilderment at the ruins of a once proud judicial system, we have proved our unfitness for democracy in no uncertain measure. Reports of commissions on lessons learnt and reconciliation may now firmly be relegated to the dustbin.

It is only a suicidal leadership which would have gone heedlessly down this path precisely when the State is being closely questioned in regard to accountability for mass killings of citizens and continuing abductions. This country is now entirely vulnerable to outside assaults. Nay, the leadership has invited such attacks, provoked them rather. We may expect the inevitable consequences therefore.

Responsibility lies on the President

And culpability therein does not lie at the foot of Parliament enthralled with the desperate antics of the Weerawansas, the Vasudeva Nanayakkaras and the GL Peirises nor with the feeble mewling of the opposition United National Party. Neither can the President’s brothers be blamed though some may still be beguiled into such foolishness. Rather, full responsibility for the abyss that we have fallen into, lies fairly and squarely on the shoulders of the Mahinda Rajapaksa Presidency itself.

This is the leadership which promotes political opportunism, thuggery and greed, exposing Sri Lanka to the world as lacking common decency let alone conformity to law. This is the leadership that took root in our midst much like a monstrously destructive growth, first with the 18th Amendment and then with the spreading of tentacles into every area of government.

It is ironic therefore that erstwhile government propagandists who cheered the demise of the 17th Amendment have now apparently found a belated conscience, if it may be termed as such, to break ranks with the Government. Their dissent however is as much in vain as other reasoned appeals. The whip of dictatorship has been cracked over the heads of all Sri Lankans. This is the final abandonment of decades of even dysfunctional democracy.

Should the judiciary not have challenged the Parliamentary Select Committee (PSC) inquiring into the impeachment? So, was the Chief Justice supposed to stay mum when patent injustice was meted out to her? This was not a run of the mill PSC. Rather, it was one tasked to enter into a finding of guilt notwithstanding puerile arguments by parliamentary officials that no such findings were entered into. The serious consequences that follow upon PSC findings regarding the constitutional right to hold judicial office underlined the ethos of the recent Supreme Court thinking that Standing Orders cannot be used to impeach a judge. The issuance of a writ of certiorari by the Court of Appeal quashing the purported findings of the PSC in issue was in logical consequence thereof. What could the judiciary have done otherwise if it had a shred of self respect?

Digging of the judiciary’s grave

An honest audit still needs to be undertaken as to the manner in which the agonising destruction of Sri Lanka’s judicial system has taken place. What we saw on Friday was the mere culmination of what commenced in 1999 when a judge of the unimpeachable calibre of the late Justice Mark Fernando was bypassed for the office of Sri Lanka’s Chief Justice with Chandrika Kumaratunga’s appointment of former Attorney General Sarath Silva. As is acknowledged with appropriate gravitas by many only now with hindsight, the grave of Sri Lanka’s democracy was dug then, well in preparation for the virtual coffin of the judiciary that would be lowered into it more than a decade later.

The few angry voices in the legal community at that time were marginalised as irrepressible idealists or accused of pursing an agenda for individuals. Indeed with the vastly honourable exception of former Supreme Court judge CV Vigneswaran, judges themselves stayed silent as the Court went its political way during the long years that followed. Academics refrained from critiquing clearly politicised judgments in fear of contempt of court. As Chief Justice succeeded Chief Justice, each willingly or forcefully succumbing to political dictates, public respect for the judiciary was severely eroded on the part of the majority as well as the minorities.

Consequentially when the inevitable frontal attack came on the Supreme Court during this Presidency provoked by minimal judicial resistance to an executive juggernaut, there were no powerful intervening barriers to break the free fall. The Bench and the Bar woke up after its decade long slumber but it was a classic case of too little, too late even though the sheer force of the belated reaction took many by surprise. Unsurprisingly, this Presidency dismissed even its one time supporters from the legal community with singular contempt.

Start of popular resistance to a corrupt regime

That said, in this apocalyptic post-impeachment period, we need to look beyond the fact that the Sri Lankan judiciary was fatally stabbed this Friday and left to die bleeding on the road. Perhaps a brighter and better moment may yet dawn.

Scarcely three months ago, a senior ‘silk’ who (before personal interests and ruder ambitions blunted its edge), arguably possessed one of the finest minds in public law in the country asked jocularly as to why I continue to condemn a ‘popular government’? Now as the lawyers revolt, the judiciary is eviscerated, judgments of the superior courts are thrown to the gutter, illiterate politicians along with dentists interpret the Constitution and common ruffians abuse the Chief Justice, could this same question be posed in quite that same way, even jestingly? Where pray is the popularity of this government, at least among the professionals?

The leadership may not care for what it dismisses as the uselessly educated vote. Yet as history shows us, it is precisely at the highest point of political arrogance that the downfall begins, sometimes swiftly and sometimes gradually. Right now, with the memory of government thugs dancing wild eyed before the Chief Justice’s residence and hurling unspeakable filth at her, such optimism may be impossible to conceive. Yet the discarding of a horrendous Constitution along with an administration rooted in injustice may still come to pass.

This is the common objective that the great collectivity of the Sri Lankan citizenry, in cities, villages and towns notwithstanding caste, creed or race, need to work towards in solidarity and profound humility
ST