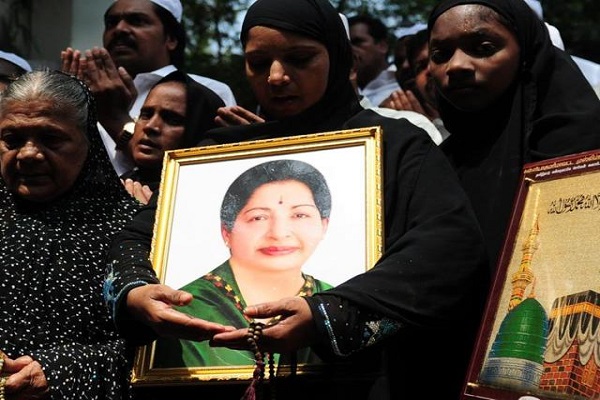 Image: people in Tamilnadu paying their respect to Jayalalitha Jayaram.

A message of condolence from the Opposition Leader and the Leader of the Tamil National Alliance, Hon. R. Sampanthan on the death of the Chief Minister of Tamil Nadu Hon. Jayalalitha Jayaram.

It is truly a sad day for the people in Tamil Nadu as they have lost one of their most influential and charismatic leaders, Hon. Chief Minister Jayalalitha Jayaram. Hon. Jayalalitha entered politics in the 1980s after she withdrew herself from the film industry. She played a crucial role in the AIADMK party, which was then led by its founder the late Mr. M.G Ramachandran. Later she was elected as the leader of the AIADMK and continued to be the leader until her death.

The Hon. Chief Minister also had a special concern for the resolution of the issues pertaining to the rights of the Tamil speaking people in Sri Lanka. Her concern resulted in the passing of several resolutions at the Tamil Nadu State Assembly and frequent interactions with the Central Government in New Delhi on Sri Lanka.

As the Leader of the Tamil National Alliance, I am grateful for the work of late Hon. Jayalalitha and the desire she had to find a solution to the issues faced by the Tamil people in Sri Lanka. I also take this opportunity to place on record our sincere appreciation for all the support and facilities Hon. Jayalalitha and her government rendered to the Sri Lankan Tamil refugee community in Tamil Nadu.

Her demise is a great loss not only to the people of Tamil Nadu but also to the Tamil people in Sri Lanka. There is no doubt that her leadership to Tamil Nadu and to Indian politics will have a significant place in history. At this time of great sorrow, on behalf of the Tamil people in Sri Lanka and the Tamil National Alliance, and as the Leader of the Opposition in the Sri Lankan Parliament, I wish to convey my deepest sympathies to the members of her family, the people of Tamil Nadu, and the members of her party and government.

May her soul rest in peace