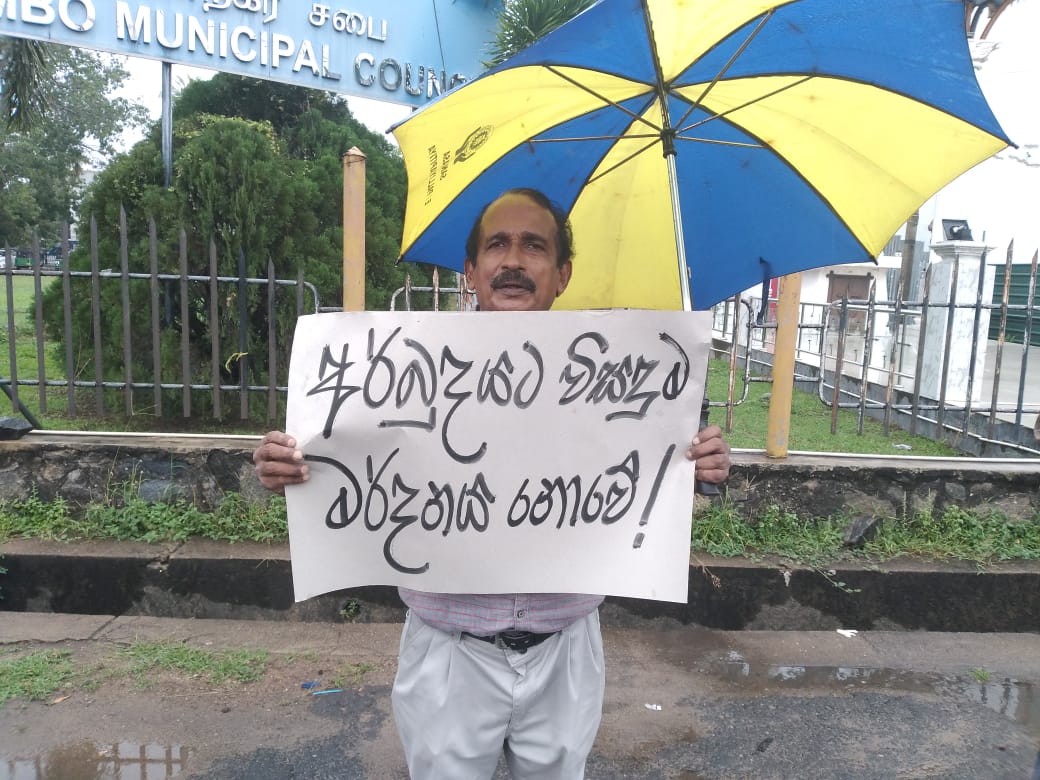 Truth and Reconciliation is now again in the air, we are sublimely told by the Govern-ment of Sri Lanka. President Ranil Wickremesinghe, along with his merry men and women in Parliament in the Pohottuwa ranks are singing to the eminently hypocritical refrain of truth and reconciliation commissions and the like.

How can the Tamil minority (let us leave aside its conniving and compromising politicians) be asked to accept any talk of ‘reconciliation’ even at face value when the record of the State towards the Sinhala majority has turned so violent?

‘Reconciliation with the North but not the South?

It is perhaps only in this country that such bare faced political chicanery takes place while those in ‘civil society’ who should speak out more in regard to that contradiction, preserving a discreet silence. How can the Tamil minority (let us leave aside its conniving and compromising politicians) be asked to accept any talk of ‘reconciliation’ even at face value when the record of the State towards the Sinhala majority has turned so violent?

In other words, what is talk of truth and reconciliation pray, when the President justifies police excesses against protestors and takes angry pot shots at oversight agencies of citi-zens’ rights, namely the Human Rights Commission of Sri Lanka, at whim and fancy? Moreover, these are ‘reconciliation’ tunes that we have heard often times before, most recently during the ‘yahapalanaya’ period of the Sirisena-Wickremesinghe coalition (2015-2019).

Memories are still fresh of the manner in which grand plans of a four pronged transition-al justice process went precisely nowhere after (literally) millions were wasted on those various exercises. If less focus is given to such glorious but ultimately useless talk cou-pled with extravagantly funded projects on ‘reconciliation’ held in five star hotels and more attention devoted to building shattered governance institutions, maybe we might just see the faint signs of actual ‘truth and reconcilation’ stirring in the polity.

Public cynicism regarding the emergent CC

But that is not to be. First, if the Government is sincere about its intention, it has a ready-made blue print in the form of the report of the Lessons Learnt and Reconciliation Commission (LLRC) many moons ago which remains unimplemented in large part. And what of the constitutional monitors that should operate independently? Despite the hur-rahs that greeted the 21st Amendment to the Constitution, there is public cynicism re-garding the records of the political appointees who have been tasked to serve on the Constitutional Council (CC), now in its third avatar (17th Amendment, 19th Amendment and 21st Amendment).

So far, the signs have not been encouraging. As some activists, bolder than others, have pointed out with good reason, the politicians who will serve on this body are not drawn from the brightest and the best in Parliament, even with the slim pickings on offer. The ‘independent nominees’ have not been named, much less appointed at this stage. There is muttering that the CC will function notwithstanding. All this is not good for the dem-ocratic health of the CC and its most sensitive task of ensuring that good appointments are made to the constitutional commissions and other senior posts in the public service and the judiciary.

Out of all the ‘independent’ constitutional commissions, it is the independent status of the National Police Commission (NPC) that ought to be looked at first and foremost. Here, I am not talking merely of the recent controversy where the NPC Chair and anoth-er member was seen at the airport ‘greeting’ Pohottuwa supremo Basil Rajapaksa on en-try to the country. The problem with the NPC goes deeper than that.

When constitutionally appointed under the 17th Amendment, it was the National Police Commission’s attempts to bring order back into the police service during its first term, (notwithstanding some initial blundering on its part), which pricked politicians into real-ising the extent of what they themselves had unwittingly perhaps agreed to. The gradual – and successful – destabilizing of the 17th Amendment was an inevitable result thereaf-ter.

It was not the National Human Rights Commission or even the Public Service Commission which created disquiet in government ranks. Rather it was the NPC which had been given constitutional and regulatory powers that were unparalleled in the whole of Asia. This was a novel constitutional experiment which, if worked properly, may have been an exemplary lesson for the region.This is not only to ensure that the police act properly but also to protect law abiding police officers themselves from being transferred out when politicians find that these police officers do not jump to obey when the whip is cracked.

If, as is sometimes contended, internal disciplinary measures put into place by the In-spector General of Police had been sufficient to contain this problem, we certainly see no hard evidence of this.The NPC, as it functioned under the 17th Amendment, may not have been ideal. However, with careful and sensitive finetuning, this constitutional mechanism may have redressed the more serious problems currently affecting our law enforcement processes. Certainly its successor under the 19th Amendment did not have a sparkling record.

Performance record of the NPC

The constitutional duties of the NPC include, in the first instance, the appointment, promotion, transfer disciplinary control and dismissal of police officers other than the IGP. This is a task in which the NPC has enthusiastically immersed itself from the start. However, Article 155G(2) of the Constitution also requires the NPC to establish meticulous procedures regarding the manner of lodging public complaints against police officers and the police service.

The NPC has a duty to recommend appropriate action in law against police officers found culpable in the absence of the enactment of a specific law whereby the NPC can itself provide redress. Such Complaints Procedures would include detailing the persons who can complain, the way it is recorded and archived and the way in which it is in-quired and investigated. Similar procedures in other countries require the Officer in Charge (OIC) and his superior officers to automatically report categories of grave inci-dents to the monitoring body, whether a complaint is made or not.

But there is little evidence of the same functioning to the highest extent as envisaged in Sri Lanka. Initially, some district co-ordinators (mostly retired policemen themselves), were appointed to look into complaints, not the ideal arbitrators as it were. The LLRC’s recommendation that an independently functioning permanent Police Commission needs to be established still remains in the air. If the proper functioning of constitutional over-sight mechanisms are secured, there will be less reason to talk of ‘reconcilation.’

What has the Government to fear?

We do not need the European Commission or the United Nations to tell us that our con-stitutional systems are not being worked properly. This we know for ourselves. What has the Government to fear from an independent National Human Rights Commission, Police Commission or an Elections Commission if it so confidently talks of ‘reconciliation’?

What exactly is meant by ‘reconciliation’? Horse trading with the Tamil political parties and bargaining for power? Does that speak to an intention to rely less and less on democratic procedures of election and support and instead use violence and intimidation to keep the electorate quiet?

These are legitimate questions to be asked.