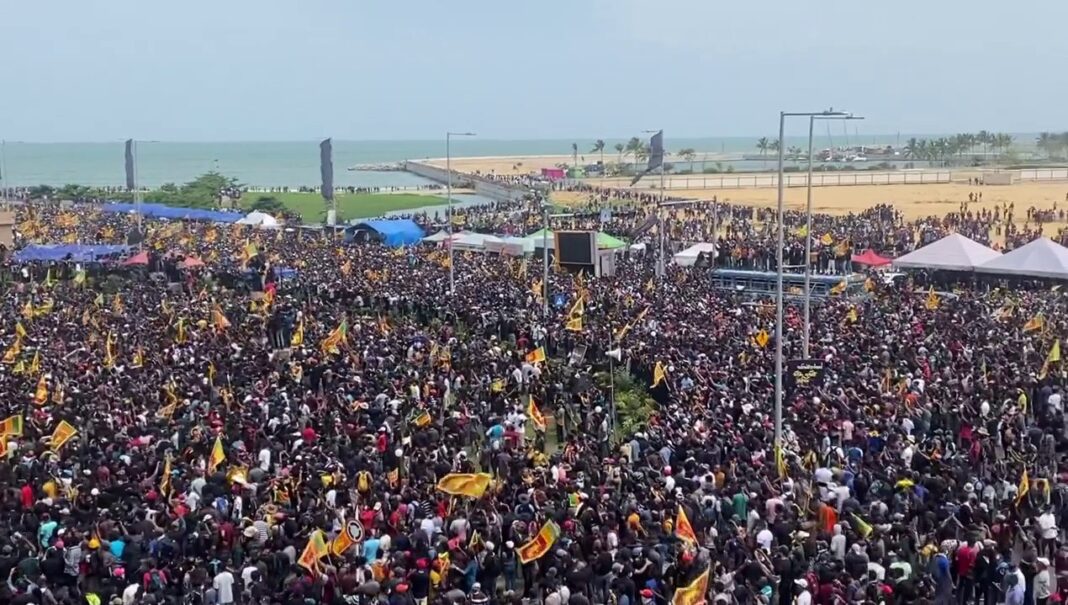 The Global Tamil Forum (GTF) congratulates the Aragalaya (Struggle) movement in Sri Lanka for the phenomenal political victory it has achieved and expresses solidarity with the ordinary citizens who are leading this change with courage and conviction. The economic crisis that engulfed the country has led to the formation of this progressive political force which has achieved revolutionary outcomes relatively peacefully. Indeed, it feels as though this is a rebirth moment for the country after its independence.

The departure from the country and resignation as President by Gotabaya Rajapaksa is a hugely important first step – an outcome no one would have imagined even six months ago. Gotabaya was responsible and must be made accountable for not only the latest mismanagement of the economy, but also on his watch countless mass atrocities happened including the killing and disappearances of tens of thousands of Tamils and many journalists during 2005-2009, and the disappearances of thousands of Sinhalese youths in 1989.

It is important that such a momentous transition continues peacefully and constitutionally until stable, democratic, accountable, and pluralistic governance is achieved – first through the formation of an all-party, representative government respecting the aspirations of the people expressed through Aragalaya, followed by general elections at a suitable time to form a government that truly reflects the will of the people.

Any new government will have to face huge challenges – hard negotiations with countries and financial institutions to restructure existing loans; seek new and urgent funding to secure essential food, fuel, and medicine; and implement difficult economic measures without imposing further distress on many people who already suffer unsurmountable hardships. GTF strongly hopes such a government will not only include all the parties represented in the Parliament but also consist of legitimate and authentic representatives of all communities.

Gotabaya Rajapaksa’s presidency may have been the least competent in the history of the country in terms of economic management and governance practices, and its discriminatory practices toward minority communities. But his government was not an exception but a continuation and acceleration of a developing trend toward increasing authoritarianism, nepotism, corruption and unaccountability, and embodiments of discriminatory treatments of minority communities. Clearly, there was an undesirable vulnerability in the electorate which the aspiring politicians wilfully exploited for their own political ends.

The present moment appears to be right for Sri Lanka to transcend the trappings of its history. It is crucial that the people and the leaders of Sri Lanka reflect deeply on the deplorable trajectory the country has traversed. How a country – the first elected democracy in South Asia with a well-recognised potential to be a success story in the region – ended up languishing among the worst performing states in the world in just 70 years. We have no doubt the unbridled majoritarian nationalism and its inability to accommodate the legitimate aspirations of Tamil, Muslim and other minority communities within a united and pluralistic country is at the root of its many failures – including the economic disaster the country is experiencing at present.

It is critical that the present historic transition leads to a truly democratic and pluralistic modern state, enshrined with a constitution that will empower the Parliament to be the centre of power with sufficient checks and balances and full accountability to the people. It is equally important that these reforms comprehensively address the long standing Tamil National Question through meaningful power devolution to the regions, so that no community would feel second class or threatened in their own country. GTF strongly believes all these critical legal and constitutional reforms should be carried out judiciously and concurrently.

Such profound changes will undoubtedly raise the profile of the country as a true democracy that respects rule of law and ensure Sri Lanka assumes its rightful place among the treasured nations of the world with its economic potential enhanced many folds.

GTF wholeheartedly supports the remarkable and hopeful developments taking place in Sri Lanka at this historic moment and would be delighted to play a constructive role in ensuring that the present momentum leads to meaningful and long-lasting changes in the country through non-violent and democratic means.